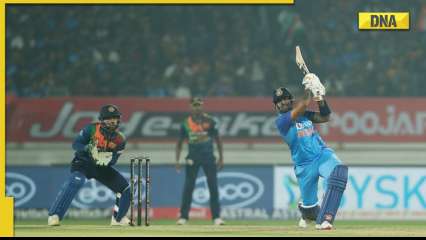 Suryakumar Yadav delivered another T20I gem at Rajkot on Saturday as he stunned cricket fans and the Sri Lankan bowling attack with his incredible strikes as he raced to a century in just 45 deliveries.

Suryakumar has joined Indian full-time skipper Rohit Sharma as the only Indian to score three or more tons in the shortest format of the game.

SKY is only the fifth player (fourth from a full country) to reach three figures three times in his career. While Rohit has four tons, he has now joined Czech S Davizi, New Zealand’s Colin Munro and great Australian all-rounder Glenn Maxwell with three tons in the game’s shortest format.

Suryakumar is one of the six Indian male cricketers to score 100 runs in the shortest format of the game. The three centuries of Suryakumar have all come in a span of six months. In July he hit a century against England and in November he hit a century against New Zealand. This is his first ton on his own property. KL Rahul is the only Indian with multiple T20I tons apart from Rohit and Suryakumar.

Most hundreds in T20I Internationals:

Suryakumar again showed his 360-degree skill, hitting sixes and boundaries on all four corners of the park to help India get close to a grand total.

He broke eight sixes and six boundaries to reach his half-century with two overs remaining in the innings to lift India above 200 runs.

His shots were brimming with power, class and elegance, and he continued to impress cricket viewers around the world with his improvisation and skill.

Suryakumar Yadav finished unbeaten on 112 from 51 deliveries, hitting 9 sixes and 7 boundaries to give India a massive total of 228. Rahul Tripathi started well with a 16-ball 35, while Shubman Gill hit 46 off 36 balls.