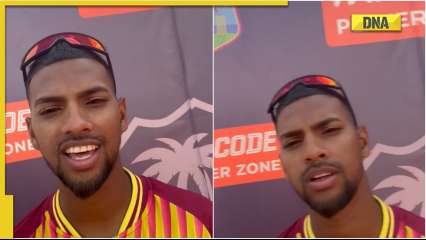 West Indian cricketers are without a doubt the funniest and most entertaining sportsmen in the world. During the Indian Premier League (IPL), fans have often had the opportunity to see the funny side of Caribbean cricketers, be it Chris Gayle, Kieron Pollard or Dwayne Bravo.

Recently, West Indies captain Nicholas Pooran also gave fans a glimpse of his acting skills as he reenacted the iconic ‘kitne aadmi the..’ dialogue from the cult classic Sholay.

The video shared by Fancode, on their Twitter handle, shows Pooran in the role of Sambha, while one fan plays Amjad Khan as Gabbar.

In the viral clip, the fan who plays Gabbar can be heard interrogating Pooran, “Arey oo Pooran, kitne aadmi the?” to which he cheerfully replied, “gyarah sardar (elf captain).”

Talk about an unlikely duo.@Gabbar and @nicholas_47 recreate this legendary scene from Sholay!

Watch all the action from the India tour of the West Indies LIVE, exclusively on #FanCodehttps://t.co/RCdQk1l7GU#WIvIND #INDvsWionFanCode https://t.co/yelfnLkIij

It appears that the video appeared to have been shot Tuesday for the third T20I between India and the West Indies.

The Men in Blue had taken a 1-0 lead in the series after some good batting displays from Rohit Sharma and Dinesh Karthik, but Pooran’s side bounced brilliantly in the second game on Monday thanks to Obed McCoy’s six-fer who gave his side. helped to a 5-wicket victory.