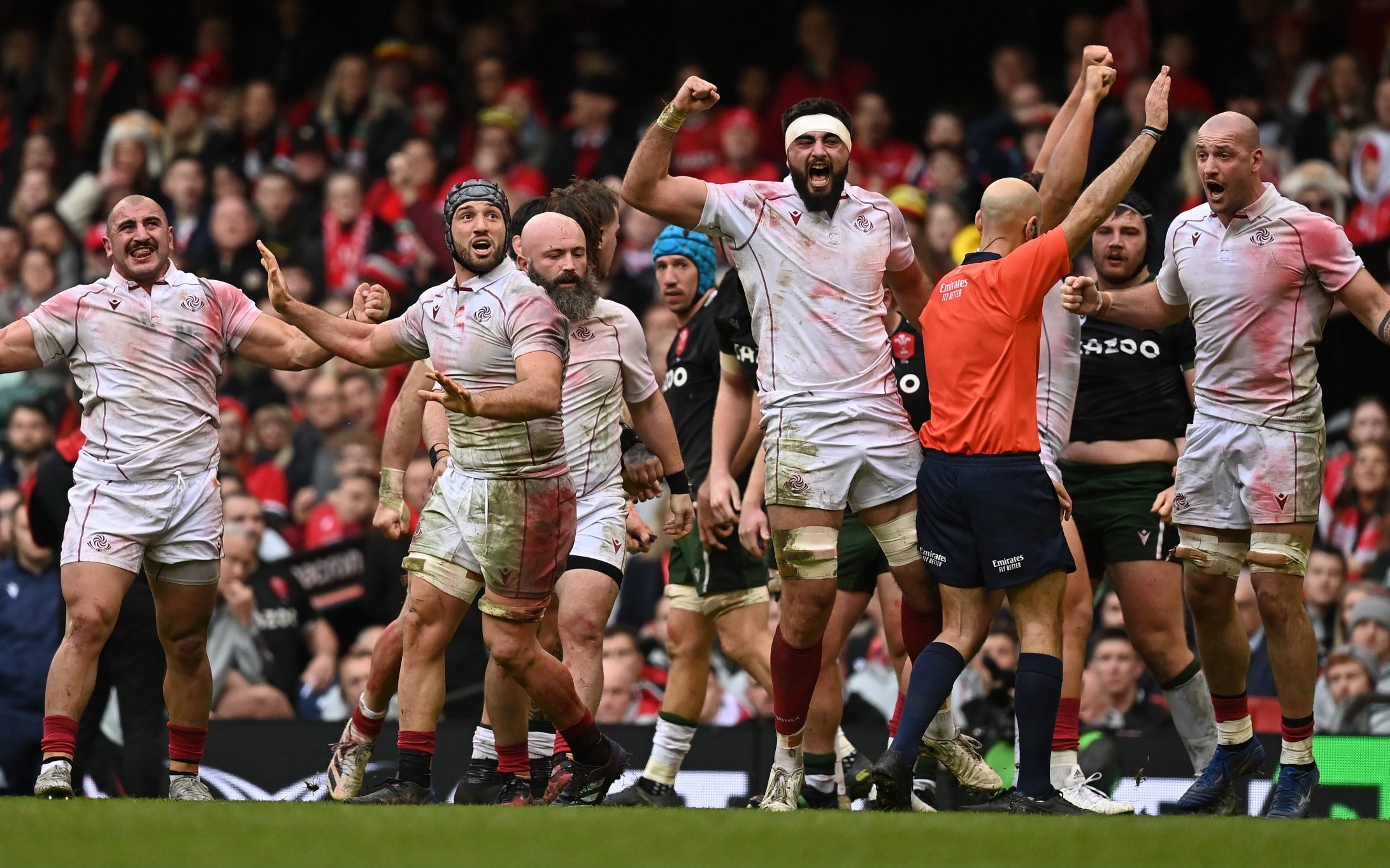 After two euphoric days in 2022, what would Georgia need to persevere and become a dominant global rugby power? Paul Tito, the former Cardiff Blues captain and current Georgia assistant coach, believes the answer is simple.

“The captain [centre Merab Sharikadze] has been quite candid about this,” Tito told the Telegraph Rugby Podcast. “We just need regular ‘Tier One’ games. We’ve proven we can mix it up against the Italians and now against the Welsh in Cardiff. If we just get those regular games in July and November that would be the goal. Ideally that would be the goal. being involved in the Six Nations would be great but I don’t know how far that goes. I think Georgian rugby is on the rise. It’s exciting to be a part of it.

“We had a brief discussion as a coaching group about where we wanted to go for that Italian game in July. Things may have progressed a little bit from there.” [after Cardiff]. It’ll be interesting to see what [head coach] Levan [Maisashvili] think about that now. Going into the World Cup, teams will not be able to treat us lightly or rotate as many players as they used to. They will have to take us seriously because they will know on our day that we are not a bad team.”

Georgia Rugby Union President and Vice President Ioseb Tkemaladze and Nikoloz Alavidze are of the same school of thought as Tito. The duo don’t expect a Six Nations call-up any time soon – although they’d like to see one come if they beat more of the top nations – and would rather burn than see their capture come through Italy. However, the GRU would not be happy with Springbok being included, a situation that has been mooted since the introduction of the South African franchises in the United Rugby Championship and Champions Cup.

“If Italy were to be kicked out, Italian rugby would decline,” Tkemaladze added. “And one or two wins don’t define our future. We have to work and work – as a rugby community – to prove we can do it.

“If the Six Nations are open to it, then we are ready. I know they are watching us, but there are many steps that need to be taken on our part economically and physically to show more stability.

“Australia, Wales, Italy, Argentina – Wales beat Argentina, Georgia [beat Wales] and all of these were within five to ten points. We have been playing in the Rugby Europe Championship for 14 years and have finished first. Fourteen years with like 100-0s, 80-0s, there’s no competition.

“But if South Africa is invited instead of us, there will be a response.”

The duo traveled from Cardiff on Sunday to spend two days in London for a reconnaissance trip. They recently met with World Rugby Vice President Bernard Laporte; on Sunday they met with Welsh Rugby Union executives; on Monday they met with Michael Cheika and on Tuesday they will meet with Rugby Football Union President Bill Sweeney. All with a view to collecting as much information as possible about setting up powerful environments.

“I want to get to know Bill,” says Tkemaladze. “And I want to listen to him and his advice. We want to learn from him. And we want to work more closely with the English clubs. We only have one player in the Premiership at the moment.” [centre Giorgi Kveseladze at Gloucester]. And Lelo Saracens [a Georgian club] had some direct ties to the English Saracens, but with some management changes that has been lost. I’ll ask Bill tomorrow [Tuesday] if we can renew those links.”

Two months ago, World Rugby President Bill Beaumont led a delegation to Georgia to meet Tkemaladze, Alavidze and the rest of the GRU. Constructive talks took place, after which both sides agreed on the establishment of a special advisory board; a six-member committee including Georgian legend Mamuka Gorgodze, World Rugby coaching representatives and others.

Meetings between the GRU and the sport’s governing body will continue in December. Tkemaladze and Alavidze believe the crux of the development of rugby in Georgia is adding depth to their club system. Their only franchise, the Black Lions, have already played in the Rugby Europe Super Cup and the Currie Cup First Division, the second tier of South Africa’s domestic competition, but there will be formal meetings around Christmas for that franchise to participate in. compete in either the European Challenge Cup or the URC – or both.

The duo salivate at the thought of hosting England in Tbilisi. But when played against Paris or Rome, the Georgian capital doesn’t quite have the same allure; a misconception according to Tkemaladze and Alavidze.

“When you come to Georgia, you will find every answer there,” says Tkemaladze. “Tbilisi has just been announced as one of the top tourist destinations in 2022. The best wine in the world is in Georgia. Once you start eating, you’ll never get up – and everything is organic, natural and cheap! Hospitality is part of our heart and soul.”

“A pint of beer is £1!” Alavidze intervenes.

“We have had good experiences hosting the Scottish football team. Around 1,000 Scots turned up. And on match day, most of the Scottish fans stayed in the pubs and bars, rather than going to the match, because the food was so good and the beer was so cheap they didn’t want to leave!

If Georgia continues to replicate their Cardiff heroics, who knows, maybe we’ll have to.