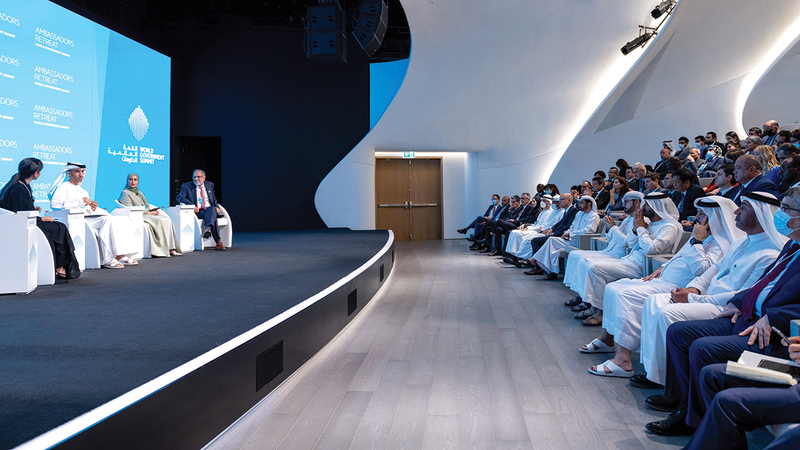 The World Government Summit Foundation, in cooperation with the Ministry of Foreign Affairs and International Cooperation, held the “Ambassadors Forum”, through which it discussed strengthening international partnerships aimed at creating a better future for societies.

About 200 ministers, government officials, ambassadors of the UAE, and representatives of diplomatic missions of brotherly and friendly governments residing in the country also participated in the forum.

The Ambassadors’ Forum constituted a qualitative opportunity to discuss aspects of international cooperation and new global partnerships to empower the next generation of governments, and to shed light on international cooperation priorities and future strategic plans to achieve a global positive impact on societies, in partnership with heads of diplomatic missions, ambassadors of the UAE, and ambassadors of sisterly and friendly countries residing in the country. .

The forum provided an opportunity to communicate and share global experiences, knowledge and expertise in supporting diplomatic and consular work and enhancing its use in defining aspirations for the next decade, exploring opportunities for international cooperation and global best practices through the World Government Summit, and strengthening partnerships and international cooperation aimed at building societies, by bringing together diplomats and industry makers. Decision under one umbrella, to share views and aspirations towards a new decade of work for the World Government Summit Foundation.

Abdullah bin Touq Al-Marri delivered a keynote speech entitled “Government Priorities during the Next Decade”, as part of the forum’s work, in which he touched on the changes that the world is going through, ways to absorb and adapt to them, and employ them to serve development visions and plans, and the importance of governments and the private sector adopting a new, more flexible and capable idea on generating opportunities.

The ambassadors’ forum discussed the importance of developing economic policies, in cooperation and partnership between the government and the private sector, and developing the system of economic diplomacy, to deal with new economic concepts such as the digital space, the data revolution and artificial intelligence.

In a session entitled “Strengthening global diplomacy through dialogue and cooperation”, the forum discussed the importance of exchanging government expertise and knowledge, the role of diplomacy in anticipating future governments, achieving global prosperity, and enhancing cooperation aimed at building sustainable societies. It also addressed the role of diplomacy in developing an advanced government work system. It contributes to strengthening partnerships and international cooperation, launching joint initiatives between countries, governments and international organizations, and the pivotal role of the economic and technological sectors in the success of these initiatives.

The session reviewed the transformations that the world has undergone at the level of international diplomacy during the past few years, the directions adopted by the UAE in facing its challenges, and its continuous endeavor to enhance international cooperation to advance various sectors.

The session touched on the need to enhance levels of flexibility, readiness and proactive thinking, and to adopt models and build new skills systems, including digital skills, that ensure more flexible and innovative governments, more able to employ technology in building future opportunities, and more efficient in investing in minds and talents, community participation and partnerships with the sector. The private.

The session dealt with the important role of the World Government Summit, which constitutes a unique global platform, aimed at stimulating change and shaping a better future, focusing on the advancement of governments and enhancing their readiness for future opportunities and challenges.

During the forum, the most prominent topics that will be covered by the next session of the summit, the date of its convening and its importance in determining the parameters of the future of the next decade, were presented.

Diplomats and policy makers share visions of a new decade of work for the World Government Summit.

The forum stressed the importance of governments and the private sector adopting new ideas that are more flexible and capable of generating opportunities.

The President of the State issues a decree by Federal Law No. 14 of 2022 amending some provisions of the Law Regulating Labor Relations