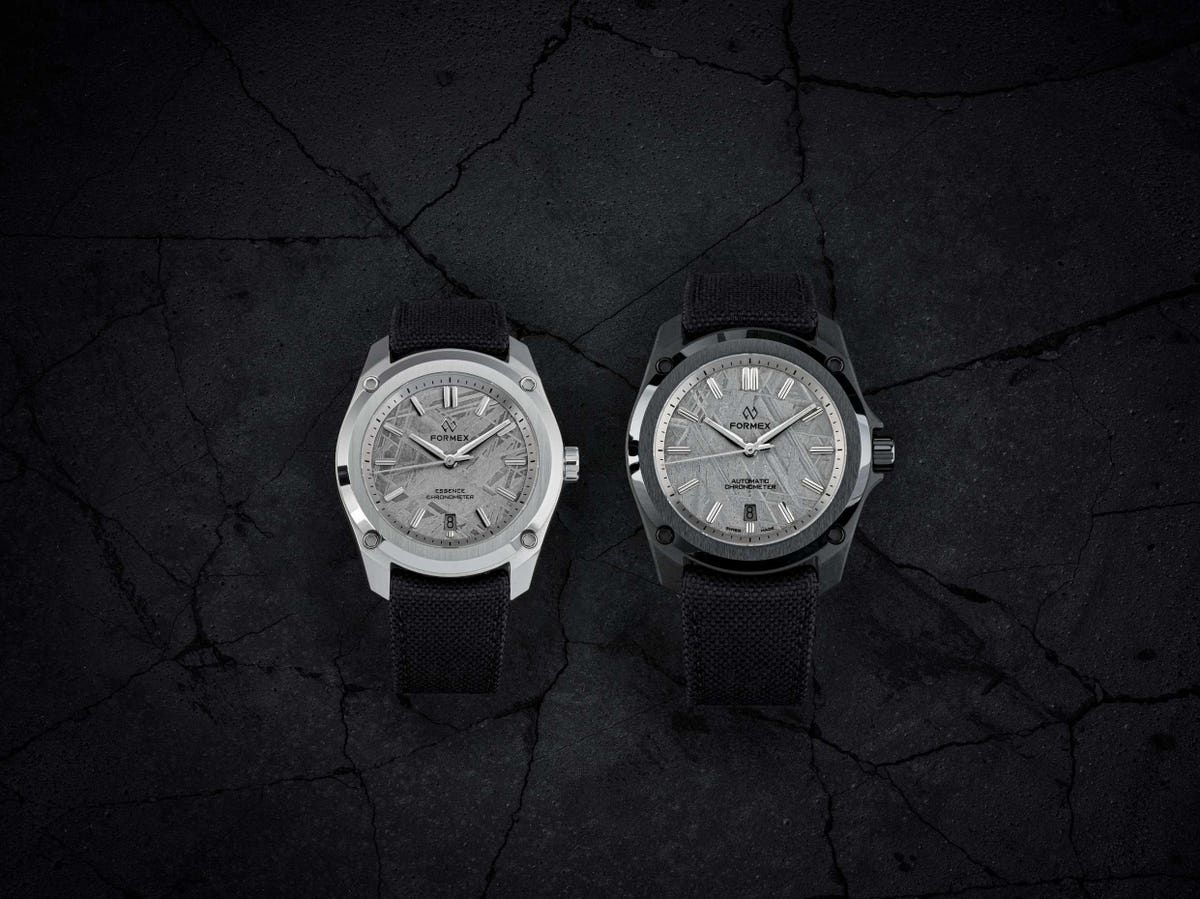 Formex is a newer Swiss watch manufacturer founded in 1999. It is a family business and takes its name from French; “Formex” is an abbreviation for “forme extreme”, which means “extreme form”. The company is located in Biel/Bienne, a 30-minute drive from Neuchâtel, Solothurn and Bern. This puts Formex at the heart of the watch country.

The company takes a lot of their inspiration from the racing world. They are most famous for their Case Suspension System, which absorbs shock to keep their movements more accurate. And while it may look bulky, it’s surprisingly comfortable to wear. When you see one of these watches, you know it’s something special.

In December 2022, Formex released the Essence Space Rock Limited Edition. This is a series of two watches, each limited to only 88 pieces. Here’s a quick look at all three:

● The Essence Thirty Nine has a 316L stainless steel case and a diameter of 39 mm.

● The Essence Leggera FortyOne has a similar design, but a larger diameter of 41 mm. Despite being larger, it is a whopping 40% lighter than the ThirtyNine.

When Formex released the original 43mm Space Rock limited edition in April 2020, all 50 pieces sold out within a week. Unfortunately, something similar happened with both new Space Rock watches. If you want to buy one, it must be from another collector.

What makes the “Space Rock” special?

“Space Rock” isn’t just a cool sounding name; it is a reference to what the watch is made of. The dial is made of meteorite iron, which has a pattern that you can’t get on this earth.

The story begins millions or even billions of years ago, with the creation of a nickel-iron asteroid. The creation of this asteroid was very violent, enough to start its life at very high temperatures. Over millions of years it slowly cooled down by a few hundred degrees Celsius. During this crucial temperature window, the extremely slow cooling rate caused the nickel and iron to form a criss-cross pattern called a Widmanstätten pattern. It’s impossible to make this pattern without slowly cooling metal over millions of years, which means you can only get it from a meteorite.

This particular meteorite landed in northern Sweden about 458,000 years ago. It was only recently discovered and the ground is frozen for most of the year. This explains how the metal is so rare and why Formex was only able to get enough of it to produce a limited edition.

The iron was cut into a cylinder, which was treated and then cut into small slices that are only 0.65 mm thick. The nice thing about this is that each disc has its own unique pattern. No two of these watches are the same. In a sense, each timepiece is a limited edition of one.

The Space Rock Limited Edition is powered by a Sellita SW200-1 automatic movement, with a power reserve of 41 hours. This is the COSC certified chronometer quality version of the SW200-1, which has been specially tuned and tested. Formex backs the watch with a 3-year warranty, which is more than long enough to ensure there are no defects.

Online hotel bookings are being investigated for abuse of ‘monopolies’

The Bharat Express News - January 28, 2023 0
Tire Nichols' family said CCTV footage of his encounter with police has left them angry and saddened and seeking more answers about why he...