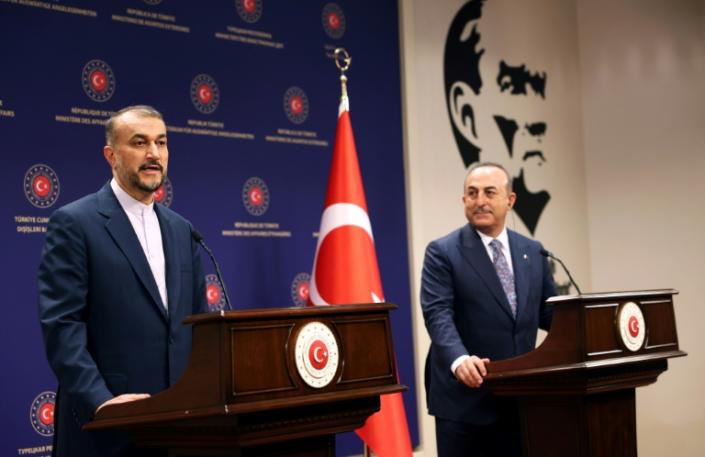 Iran on Tuesday praised the resumption of the first direct ministerial talks between arch-rivals Ankara and Damascus since the outbreak of civil war in Syria more than a decade ago.

But Damascus ally Russia managed to arrange the first face-to-face meeting between Syrian and Turkish defense ministers since 2011 in Moscow in December.

More meetings are tentatively planned for the coming weeks to pave the way for a historic peace summit between Erdogan and Assad.

“We are very happy that relations between Damascus and Ankara are changing,” Amir-Abdollahian told reporters after talks in Ankara with his Turkish counterpart Mevlut Cavusoglu.

“We believe that any positive development in Ankara-Damascus relations will benefit our region and our countries,” Iran’s foreign minister said.

Amir-Abdollahian flew from a visit to Damascus to Ankara on Saturday for talks with Syrian counterpart Faisal Mekdad.

Cavusoglu said he planned to hold his first official meeting with Mekdad “in the coming period”.

He had previously suggested that he meet his Syrian counterpart in Moscow next month.

“Today we have emphasized that Iran’s contribution to this process is very important,” said Cavusoglu.

Russia’s ability to reopen dialogue between NATO member Turkey and the Assad government has upset the United States.

Washington’s relations with Ankara are already strained by US support for Kurdish forces in northern Syria, whom Erdogan regards as “terrorists”.

Some analysts believe Russia hopes Damascus and Ankara can unite in their shared desire to expel US troops from Syria.

The US State Department said this month that it “will not support countries that improve their relations or show their support for the rehabilitation of ruthless dictator Bashar al-Assad”.

The Syrian leader has also set tough conditions for a meeting with Erdogan.

Assad said last week that a presidential summit depends on “the end of Ankara’s occupation” of parts of Syria.

Erdogan argues that Turkey needs a military presence in northern Syria to protect its territory from cross-border attacks by the Kurdish forces.

Cavusoglu said on Tuesday that Ankara respects Syria’s “territorial integrity” but also seeks support in its fight against “terrorists”.

“These terrorists must be wiped out,” Cavusoglu said, referring to the Syrian Kurdish forces.

“We must fight terrorism together.”

Iran’s top diplomat also held a 90-minute meeting with Erdogan in Ankara, including discussions about the timing of a long-planned visit to Turkey by Iranian President Ebrahim Raisi.

“Hopefully, this visit will take place in the near future and will accelerate our bilateral relations,” said Amir-Abdollahian.

Stop worrying about China: Trump is the real threat

The Bharat Express News - February 7, 2023 0
Lauren Boebert has come under fire after expressing hope at a church event in Texas that President Joe Biden will have "few days."The House...