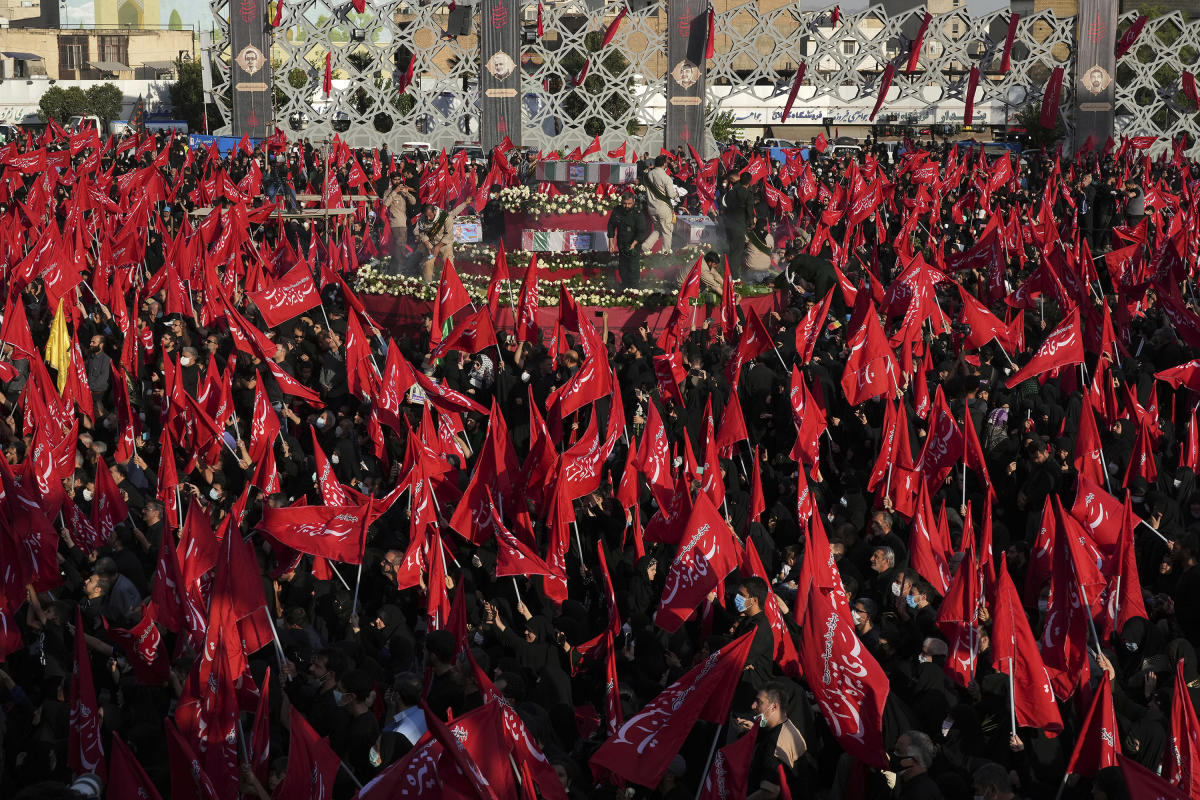 TEHRAN, Iran (TBEN) — Mourners poured onto the streets of Tehran on Thursday to pay their respects to several Iranian officers killed in Syria, a testament to the human cost of Iran’s involvement in the civil war and a public display of nationalist zeal as nuclear talks resume in Vienna.

The remains of paramilitary members of the Revolutionary Guards were recently recovered in Khan Tuman, a village 9 miles (about 15 kilometers) south of Aleppo, Syria’s largest city and for many years the main frontline of the war.

The Guards identified the five deceased fighters and gave few details about their deaths, with the exception of General Abdollah Eskandari – a decorated commander who became known as the “headless general” after his capture and beheading by Syrian rebels in May 2014. Their bodies were repatriated after a lengthy process of repair and TBEN analysis.

Iran has admitted more and more casualties since it intervened to rescue the government of Syrian President Bashar Assad, a ground presence that coincided with the Russian air campaign and helped Assad regain control of most of the country. While Iran has only acknowledged that its armed forces have an advisory role, dozens of Iranian soldiers have been killed in the fight against the Islamic State group and other extremists in Syria.

Funeral marches meandered through cities across the country this week, starting Monday in the northeastern city of Mashhad before moving south, with each officer’s body returned to his birthplace for burial.

The thousands gathered in the streets of Tehran on Thursday night waved red flags on the occasion of Ashoura, a commemoration of the 7th-century death of the prophet Mohammed’s grandson, Hussein, a revered figure in Shia Islam. Chants of “Death to America” ​​and “Death to Israel” echoed from the crowd.

In a speech, Guards Commander General Hossein Salami praised the return of the fighters’ remnants and the survival of Assad’s government.

“We wanted the (Assad) system to stay, but the US, Europe and the Arab world didn’t want it. Now look who’s staying in the country,” Salami said.

Meanwhile, Iran’s Intelligence Ministry said authorities have arrested 10 suspects associated with the Islamic State group that had planned attacks in various locations in Iran during Ashoura rallies scheduled for next week. Two officers were injured in firefights with suspected militants in the south and west of the country, the ministry added.

Iran’s Shias venerate the dead, especially their martyrs killed in battle, so the funerals for guards officers are a way to gauge public opinion and rally support for the theocracy at a time of political and economic crisis.

Talks to reinvigorate Iran’s ruptured 2015 nuclear deal with world powers resumed in Vienna on Thursday after a months-long standoff, apparently a last-ditch effort to save the diplomatic process from collapse. The prospects for a breakthrough are dimmed as Iran makes rapid progress with its nuclear work under waning international scrutiny and political opposition to the deal grows in Washington.

Meanwhile, Iran’s economy is reeling under heavy sanctions, four years after former President Donald Trump withdrew the United States from the landmark accord that granted sanctions relief from Tehran in exchange for strict restrictions on its nuclear program.