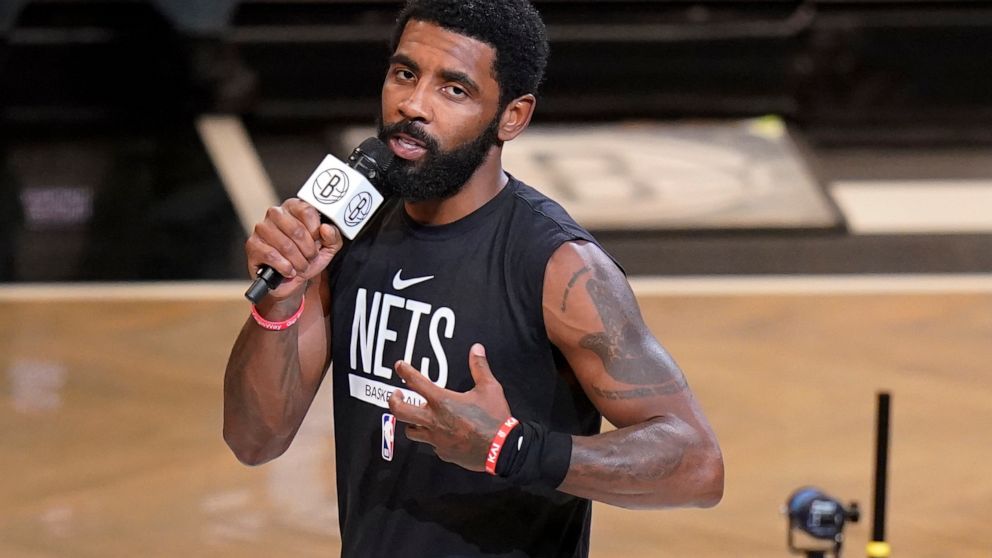 NEW YORK — Kyrie Irving returned to the Brooklyn Nets on Sunday and apologized to anyone who felt threatened or hurt when he posted a link to a documentary containing anti-Semitic material.

Irving was suspended from the team on November 3, hours after he refused to say he had no anti-Semitic beliefs during a meeting with reporters at the Nets’ practice facility.

Back in the building for the team’s shooting, Irving said he should have approached that interview differently.

“I don’t stand for anything remotely close to hate speech or anti-Semitism or anything against humanity,” Irving said. “I feel like we should all have the chance to speak for ourselves when things are assumed about us and I feel it was necessary for me to stand in this place and take responsibility for my actions because there was a way where I should have tackled everything.” this and when I look back and think when I had the opportunity to express my deep regret to anyone who felt threatened or hurt by what I posted, that was not my intention at all.

Irving missed eight games during the suspension, which the Nets said would be a minimum of five games without pay. The team said he is available to play in Sunday night’s home game against Memphis.

Irving said he was initially looking for more information about his heritage when he posted the link to “Hebrews to Negroes: Wake Up Black America” ​​on his Twitter page. When first asked about it, he was defiant about his right to post material that interested him. He then refused to apologize or clarify his religious beliefs during another interview a few days later, leading to his suspension.

“I rightly defended that there was an assumption that I might be anti-Semitic, or that I intended to post a documentary to side-by-side with all the views in the documentary,” Irving said, adding: “How can you call someone an anti-semite if you don’t know them?”

But his tone was more thoughtful as he spoke for about 12 minutes on Sunday, thanking family and friends for their support. Some, including National Basketball Players Association officials and Nets general manager Sean Marks, were in the room as he spoke.

“I have not harmed anyone, any group of people and yes, this is a great moment for me because in this process I can learn that the power of my voice is very strong, the influence that I have inside. my community is very strong and I want to be responsible for that,” Irving said. “To do that, you have to admit when you’re wrong and in cases where you hurt people and it affects them.”

Nike suspended its relationship with Irving and the fallout seemed to further strain the relationship between Irving and the Nets, who refused to give him a contract extension last summer. He missed most of their home games last season when he refused to get vaccinated against COVID-19, as was mandated in New York City at the time.

The organization said he was “unfit to be associated with the Brooklyn Nets” when it suspended him. But the Nets praised Irving on Sunday for the steps he has taken since then.

“Kyrie took responsibility for this trip and held discussions with various members of the Jewish community,” the team said in a statement. “We’re glad he’s approaching the process in a meaningful way.”