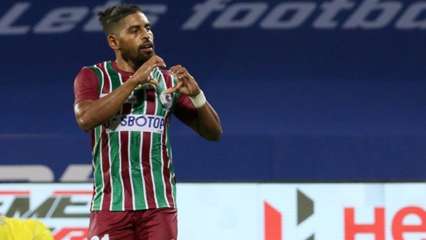 ATK Mohun Bagan started the 2020/21 Indian Super League season to a high point with a 1-0 victory over the Kerala Blasters at GMC Bambolim Stadium, Goa on Friday. Roy Krishna scored the first goal of the 2020/21 ISL season and his strike in the 67e One minute was enough for ATK Mohun Bagan to secure his fifth victory in 13 games against the Kerala Blasters. It was a cautious start on both sides as they looked to get into the rhythm of the new ISL season which will be played behind closed doors due to the coronavirus pandemic which is currently mounting in India.

The start of the tournament marked the return of the first major live sports action in India after the COVID-19 lockdown. Kerala Blasters FC played with a heavy defensive formation of 4-2-3-1 managed to thwart ATK Mohun Bagan throughout the first half.

All eyes were on historic 131-year-old club Mohun Bagan as they made their ISL debut following their ‘marriage’ to three-time defending ATK champion. The match had an interesting subplot as Kibu Vicuna, who guided Mohun Bagan to his fifth I-League title last year, sat in the shelter of the Kerala Blasters while the most successful coach in the world. ‘ISL, Antonio Lopez Habas, was the head of ATK Mohun Bagan. .

In the first half of the game, the two teams competed against each other, preventing each other from taking the lead. After a scoreless first half, both teams started to play aggressively in the second half.

However, it was ATK Mohun Bagan who managed to take advantage of it. Roy Krishna scored in the 67th minute, putting his team ahead of the Kerala Blasters. The match saw no more goals and ATK Mohun Bagan emerged victorious. For his victorious performance, Krishna won the hero of the match award.

After guiding his team to victory, Krishna said he was happy to be on the scoresheet. “I’m happy to play for this team, especially for this club. It’s a privilege. I’m not going to take all the credit. I think we defended very well. I had a few chances in the first half, disappointed. But happy to do it. get on the scoresheet, “he said in a video posted by ATK Mohun Bagan on Twitter.

The Bharat Express News - November 30, 2020 0
Another day and another defeat for India in the fifty-plus format. The Indian team continued their 50-point cricket losing streak as they lost...