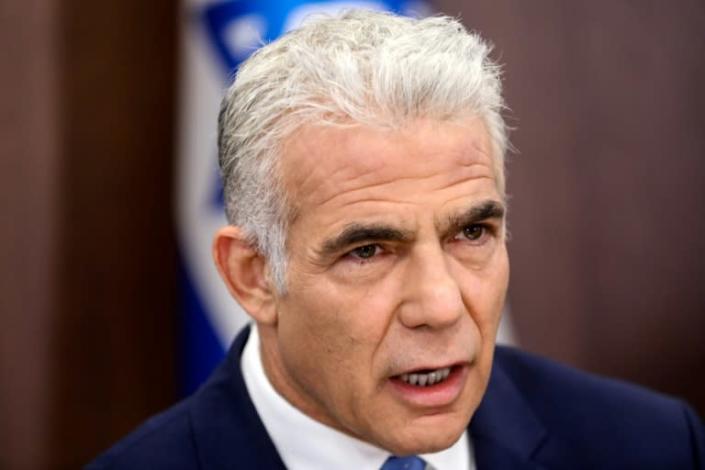 Israeli Prime Minister Yair Lapid on Sunday stepped up pressure on the United Nations to dissolve a commission investigating Israel, appealing to the secretary-general over “anti-Semitic” comments by a member of the agency.

The Commission of Inquiry (COI) investigating abuses in Israel and the Palestinian territories was established last year by the UN Human Rights Council after an 11-day war between Israel and armed militants in Gaza.

Israel has flatly refused to cooperate with the commission, which has so far largely blamed Israel for investigating “all the root causes” in the decades-long conflict.

On July 25, Commissioner Miloon Kothari was quoted as alluding to a “Jewish lobby” and questioning whether Israel deserved its UN membership, raising old allegations that the council is biased against the Jewish state.

“These anti-Semitic comments are a blot on the entire United Nations and are not befitting a person in such a responsible position,” Lapid said in a letter to Secretary-General Antonio Guterres.

The commission “has been fundamentally tarnished by the publicly expressed biases of its leadership,” Lapid added, demanding “the immediate removal of all three members.”

The Israeli ambassador in Geneva on Friday had urged the chairman of the council to dissolve the committee.

Asked in an interview published Monday by online publication Mondoweiss about member states’ criticisms of the commission, Kothari had pointed to wider efforts to undermine her investigations.

“We are very discouraged by the social media which is largely controlled by, whether it be the Jewish lobby or specific NGOs, a lot of money is thrown to discredit us,” he said.

Several ambassadors, including from Britain and the United States, have also expressed outrage at the comments.

She said his comments reflected the commission’s “disappointment at Israel’s continued lack of cooperation” in its investigation.

“Keys to a ‘Jewish lobby’ that ‘controls’ the media are reminiscent of the darkest days of modern history,” Lapid said.

False confession to murders in Indiana led to 30 years in...