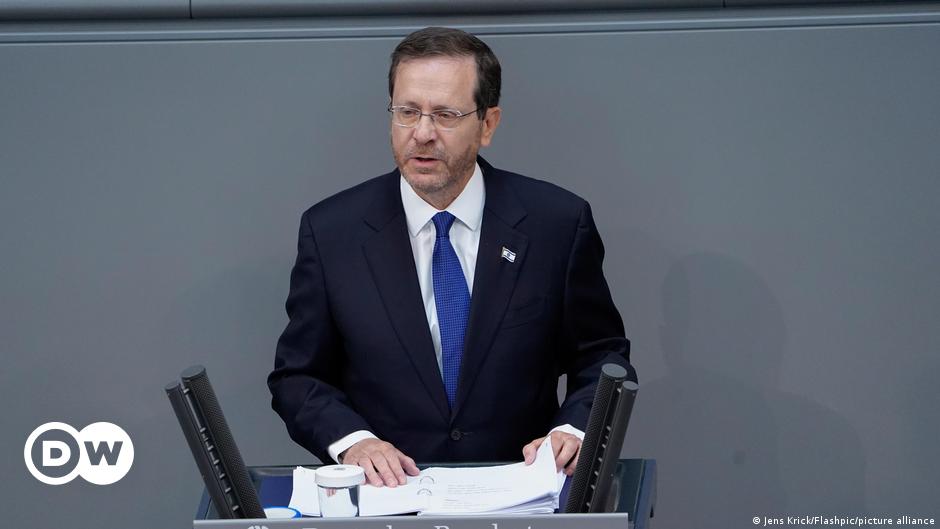 Israeli President Isaac Herzog addressed the Bundestag on Tuesday as part of a visit to coincide with the killing of 11 Israeli athletes at the 1972 Munich Olympics.

The visiting president spoke of the need to remember both Germany’s Jewish past and the Holocaust, as well as the importance of shaping the future.

What did Herzog say in the address?

Herzog addressed lawmakers, saying that being on German soil meant remembrance, because it was a land of images for the Jewish people: “Images of the highest achievements and the lowest.”

But, Herzog added, Germany also had a unique place in Jewish history given its responsibility for the Holocaust.

“Here, this country, Germany was the country where the worst atrocities against the Jewish people, yes against humanity, were committed.”

“Only the dead can forgive, and the living have no right to forget,” he said, adding that the future also requires attention.

“The past cannot be conquered, but the future is ours,” Herzog said. “We also have a great responsibility for it.”

The Israeli president said it was important “not to turn a blind eye to the voices of hate, whether they be on the streets, on social media or in political centers of power.”

Herzog also stressed the threat posed by Iran and the need to prevent Iran from accessing nuclear weapons.

“If Iran had nuclear weapons, it could use them to destroy another country and this cannot be acceptable,” Herzog added.

The Israeli president’s comments came as Tehran is in negotiations to revive its 2015 nuclear deal with world powers, which granted Iran relief from sanctions in return for curbing its nuclear program. Israel strongly opposes the 2015 agreement.

After giving his speech to German lawmakers, Herzog would lay a wreath with German President Frank-Walter Steinmeier at the Memorial to the Murdered Jews of Europe in Berlin.

Together with their wives, he and Steinmeier then go to the memorial site of the former concentration camp Bergen-Belsen near the town of Celle in Lower Saxony.

More than 52,000 inmates in concentration camps and about 20,000 POWs died in the infamous site. Among them was the Jewish girl Anne Frank, whose diary became world famous.

Herzog’s father Chaim Herzog, who served as President of Israel from 1983 to 1993, was one of the British officers who liberated the camp.

After arriving on Sunday, Herzog attended a memorial on Monday to mark 50 years since the Munich Olympics massacre.

Eight gunmen from the Palestinian militant group Black September stormed the Israeli team’s apartment in the Olympic village on September 5, 1972.

They shot dead two athletes and took nine hostages. The West German police responded with a botched operation in which all the hostages and a police officer were killed.