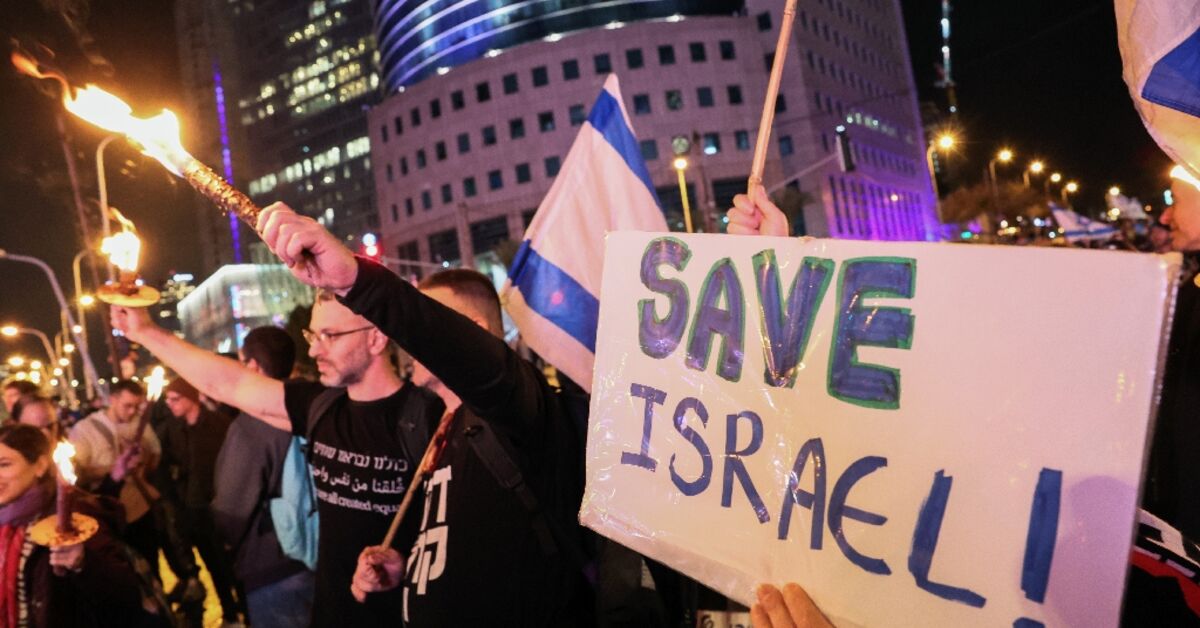 Protesters braved the rain for the rally, brandishing placards with slogans denouncing a “government of shame” and urging “bring down the dictator,” TBEN correspondents said.

The demonstration is the largest since Netanyahu’s new government took power in late December in Israel, a country of just over nine million people.

“The situation is worrying and scary,” said 22-year-old protester Aya Tal, who works in the high-tech industry.

“They want to take away our rights… We must unite.”

Other rallies were held in Jerusalem, outside the residences of the prime minister and president, and in the northern city of Haifa, local media reported.

Already Israel’s longest-serving prime minister, Netanyahu returned to power at the head of a coalition that includes far-right and ultra-Orthodox Jewish parties, some of whose officials now head key ministries.

Protesters called on Netanyahu, who is fighting corruption charges in court, to resign.

The crowd filled the streets around Habima Square in Tel Aviv chanting “democracy, democracy,” according to an TBEN correspondent.

Opposition parties had called on Israelis to join the demonstration – organized by an anti-corruption group – to “save democracy” and in protest against a planned judicial overhaul.

In Israel, which has no constitution, the Supreme Court currently has the power to revoke laws it deems discriminatory.

Former Supreme Court Justice Ayala Procaccia told the crowd that the Israeli public “will not accept the destruction of the basic values ​​of our system.”

“We are at a fateful moment for Israel’s future,” she said.

The new government has also announced plans to implement a policy of settlement expansion in the occupied West Bank and implement social reforms that are of concern to members and supporters of the LGBTQ community.

The rally included messages against the Israeli occupation of the Palestinian territories and calls to protect the rights of the LGBTQ community.

“There is no democracy with the occupation,” one sign read.

Netanyahu is the first sitting Israeli prime minister to be indicted while in office. He denies the allegations against him of bribery, fraud and breach of trust.

The leader of the right-wing Likud party was removed from office in 2021 after a record 12 years led by a motley coalition of parties elected after anti-corruption protests that called for Netanyahu’s resignation.

His return to power ended an unprecedented period of political stalemate that forced five elections in less than four years and deepened social divisions.

The leader of the centre-left opposition Labor Party, Merav Michaeli, was one of several politicians at the Tel Aviv rally, as was former foreign minister Tzipi Livni.

Former Defense Secretary Benny Gantz, now in the opposition, shared a video of himself during the demonstration on Twitter.

“We will ensure that Israel’s democratic base is preserved,” he said. “We are fighting together for the future of the country.”

Israeli troops are choking and howling from their own tear gas

Mother accused of murdering her children built a snowman with them...