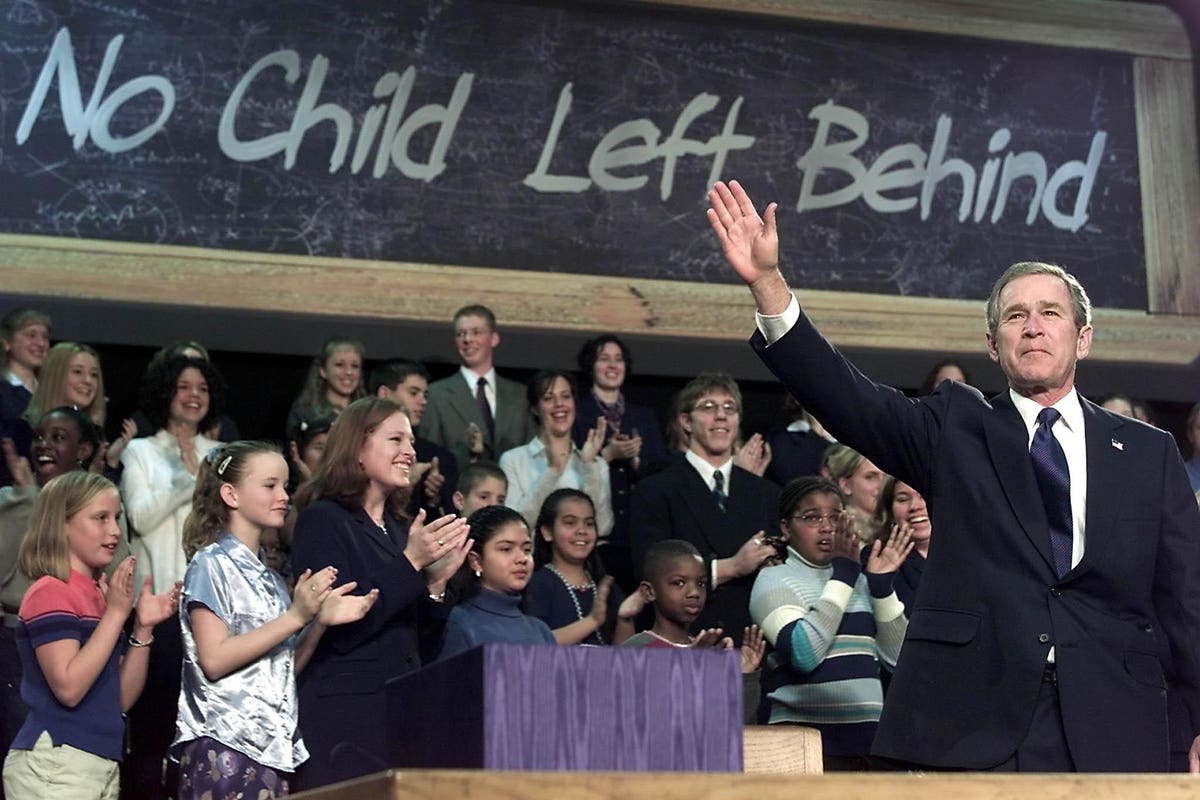 Twenty years ago this fall, we began the first new school year of the “No Child Left Behind” era. In early 2002, after nearly a year of tendentious stop-and-start negotiations and just months after 9/11, overwhelming bipartisan majorities of Congress passed the No Child Left Behind (NCLB) Act — George W’s signature proposal. Bush’s “Compassionate Conservatism.”

The law gave schools 12 years to give 100 percent of their students “skill” in reading and math. States had to develop plans to show how they were going to achieve this. Of course, they first had to define what “skill” meant and then do regular reading, math, and science testing to see how students fared (with results reported by race, gender, language ability, and more). School systems were given federal regulations on how to intervene in schools where too many students were incompetent.

There was, of course, much more at NCLB. The thing ran hundreds of pages for a reason. But the result has been a massive upheaval in K-12 education, fueled by expectations that federal mandates for testing, transparency, accountability, and remedies could ensure that children are no longer, well, left behind.

In the end, it didn’t quite go the way everyone intended. This fall, 20 years later, it’s worth reflecting on some lessons that have been obscured by the passage of time — especially at a time when the current White House has pushed for all sorts of ambitious federal education programs and guidelines.

NCLB Kinda, Sorta worked. No Child Left Behind was announced as a tool to encourage schools to put more effort into ensuring that underperforming students are getting the basics down. There was some evidence that this happened. On the National Assessment of Education Practice (the “report card of the nation”), there was a notable performance bump around the passage of NCLB, and the next half-decade showed some steady progress. The gains weren’t huge, but they were real and they were disproportionately burdened by the overlooked students NCLB was supposed to help.

Profits came at a price. The hope was that the NCLB would both raise “the ceiling” (promote teaching excellence) and raise the floor (improve the performance of underperforming students). In practice, it didn’t really work that way. School systems eventually resorted to all sorts of questionable, anti-excellence strategies to raise the floor. Meanwhile, they are cutting back on social studies, civics, art, recess and gifted education to spend more time on tested subjects. All this tended to lower the ceiling. Scores may have gone up, but it wasn’t clear that students were learning more — and high achievers tended to be put on the back burner.

Schools went test crazy. When NCLB was being negotiated, there was general agreement that we needed more transparency about how schools were doing and that schools should take more responsibility for each student. This was undisputed outside the national education schools and teachers’ unions. In the years that followed, however, schools became fixated on tests. Test preparation, benchmark testing, test-based evaluation of teachers, fraud scandals and many games around the meaning of “skill” gave the impression that schools had lost the thread of the plot.

There was a backlash. Less than a decade after the NCLB’s approval, most schools in the country were legally assessed as “improved” and subject to a series of mandatory federal remedies. At the same time, would-be reformers and Obama Department of Education officials used the door the NCLB had opened to push through a slew of new technocratic proposals. Populist concerns over the Common Core, union complaints over test-based evaluation of teachers, and conservative frustration over federal overreach, all coupled with a sense that testing had run amok, fueled the backlash that led to the NCLB dismantling Every Student Succeeds Act in 2015 .

Perhaps the big lesson here is that ambitious social reforms aren’t just about doing something that “works” in the short term. While the NCLB seemed to boost test scores in its early years, perhaps its greater legacy was undermining widespread support for testing and helping to entangle educational responsibility in bigger political battles. When it comes to education reform, the NCLB reminds us that the real-world responses from parents and educators will likely outweigh the aspirations of federal lawmakers.

The future of school? “Brown Outs.”

Why Lizzo Plays a Library of Congress Flute Matters