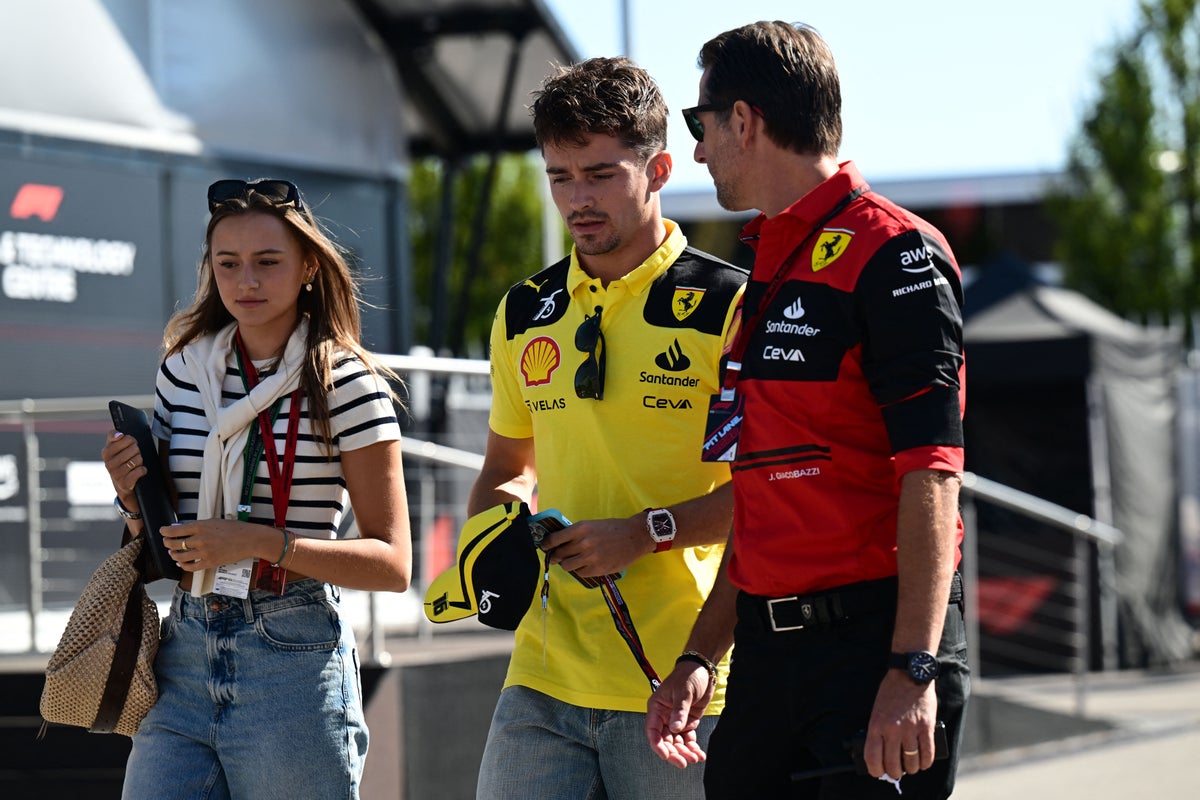 Charles Leclerc put his Ferrari on pole position for the Italian Grand Prix to the delight of the Monza crowd.

Leclerc pulled out all the stops with his final run at the Temple of Speed ​​to drive the Tifosi wild, with Max Verstappen having to settle for second. Verstappen takes a five-place grid drop, punishing the world champion among nine of the 20 drivers for exceeding their number of allocated engine parts.

Carlos Sainz, Sergio Perez and Lewis Hamilton qualified third, fourth and fifth respectively, but the trio will also face grid penalties. Hamilton will start from the back after taking over his fourth engine of the season – one more than he is allowed.

George Russell finished sixth but takes advantage of those penalized above to join Leclerc on the front row. Lando Norris qualified seventh but will start third in his McLaren once the grid penalties are applied.

Follow all the action with TBEN – the race starts at 2pm (BST):

Lewis Hamilton fears overtaking at Sunday’s Italian Grand Prix could be so difficult that he might be better off watching Game of Thrones on an iPad in his Mercedes cockpit.

Hamilton qualified fifth at Monza, 1.3 seconds behind pole sitter Charles Leclerc, but will start in 19th place after taking on his fourth engine of the campaign – one more than he is allowed.

Overtaking is possible at the so-called Temple of Speed, but Hamilton fears a DRS train – formed when a line of cars gets stuck in a row while using their own energy boost – will thwart his progress through the pack.

“I was behind Valtteri Bottas in practice and I couldn’t overtake or pass him,” said Hamilton. “So I hope I don’t get stuck tomorrow. But I imagine I’m on a DRS train, and we’ll just sit there and hope for opportunities through strategy and tire degradation from other drivers. ”

Hamilton added with a smile: “I was thinking about taking my iPad into the race and if I’m in a DRS line I’ll just watch the new Game of Thrones.” Hamilton’s yellow 44 on the side of his Mercedes has been blackened in honor of the Queen, with a plethora of tributes paid up and down the paddock to the long-serving monarch.

F1 Italian Grand Prix: EXCLUSIVE – Lando Norris on dealing with online abuse and a ‘tough’ year on the track

At the height of last year’s exciting title battle between Max Verstappen and Lewis Hamilton, F1 revealed the results of a survey of more than 150,000 fans in 187 countries. In the stats that followed, the most popular name stood out among female fans and under 25s. Because it wasn’t Verstappen, nor was it seven-time world champion Hamilton. Instead, it was Lando Norris.

The affable 22-year-old, in his fourth season with McLaren, is now a household name, but conducts his business casually; an undeniable swagger that has grown year after year in tandem with its enormous popularity.

For example, this chat takes place a day after Norris, to use his own words, “shocked” at the BMW PGA Championship Pro-am in Wentworth, but where he “had more fans than Rory (McIlroy) … I think! ” We also speak as his neck is covered in a Daniel Ricciardo-directed honey badger and a love heart inspired for a video on McLaren’s social channels.

This is what makes Norris so trendy at Generation Z. His rounds of golf are online for everyone to watch. His gaming sessions are streamed live on Twitch. His face on This morning is now known. But beneath the warm bravado bouncing through the RV like a spring chicken, a man is all too aware of the dangers of social media and the abuse it can cause.

“I don’t even have Twitter on my phone,” he reveals to TBEN. “With Instagram, I use it in the amount I need. Of course I read the comments, everyone does. I just laugh at the bad comments.

‘I laugh at the bad comments’: Lando Norris on dealing with online abuse

Exclusive interview: One of Formula 1’s biggest stars talks about the dangers of life outside the paddock and his deep desire to win his first Grand Prix

F1 Italian Grand Prix: What is the starting grid?

It took a while, but here’s the starting grid for this afternoon’s race!

With the massive roar of the red-clad fans in the stands propelling him forward, Charles Leclerc risked everything to take pole position at Ferrari’s home race amid confusion over the grid after qualifying for the Italian Grand prix.

While nine drivers took several grid drops for Sunday’s race at Monza’s centennial event, Leclerc is one of the few frontrunners unaffected. But in the end he earned first place on the track, blasting past teammate Carlos Sainz and stopping Max Verstappen in his “on the limit” final run in Q3.

“It’s a very good surprise today. After Spa, we didn’t expect to be fighting for pole here,” a beaming Leclerc – stunning in his unique yellow race suit for this special weekend – said afterwards.

“We have found some speed, we have worked in the right direction and hopefully we can show that in the race. Whatever happens on the first lap, I still think we have the speed to win the race. No mistakes and I think we can have a good Sunday.”

Mistakes, of course, have overshadowed Ferrari’s emergence from the wilderness this year. Any pit stop or miscalculation of strategy tomorrow will be felt here more than anywhere else, with the fierce eyes of the tifosi react to every move as the prancing horse celebrates its 75th birthday.

George Russell – who qualified sixth – will start on the front row alongside Leclerc, thanks to the chaos on the grid that has entranced Monza this weekend due to the many engine and gearbox penalties. Lando Norris, who finished on the podium in McLaren’s one-two last year, will start third. Verstappen qualified second but will take a five-place grid drop and similarly, Perez was fourth fastest but has a 10-place drop.

Ferrari’s Charles Leclerc risks everything for pole position in Monza

F1 Italian Grand Prix: What time is the Italian GP?

When is the Italian Grand Prix race?

How can I watch it online and on TV?

If you are not a Sky customer, you can buy a NOWTV day pass here to watch without a subscription.

We may earn commission from some of the links in this article, but we never let this affect our content. These revenues help fund journalism in TBEN.