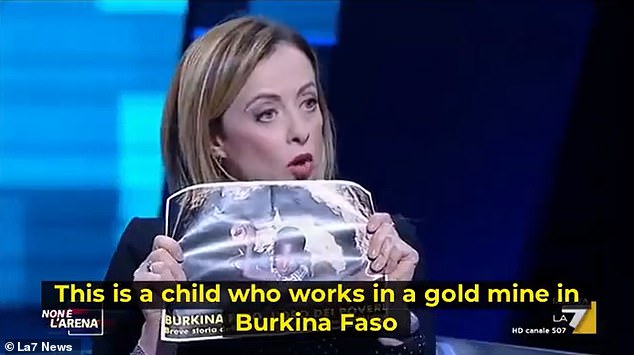 Italy’s newly appointed Prime Minister Giorgia Meloni launched a blistering rant claiming that immigration from countries in Africa would stop if countries like France stood up to the exploitation of the continent’s people and natural resources.

IMeloni has criticized France and its president, Emmanuel Macron, for child labor used in gold mines that allegedly benefit the European country.

Speaking to a television audience, Meloni showed pictures of children mining for gold in Burkina Faso, an African country once controlled by France. The Italian Prime Minister claimed that France is still forcing the African nation to hand over 50% of its exports to them.

Burkina Faso has been independent from France since 1960, but Meloni suggests the former colonial power still has significant influence over its former territory.

Italy’s far-right prime minister, Giorgia Meloni, has slammed France for its policy towards the former territory of Burkina Faso, which she alleges employs young children in gold mines. 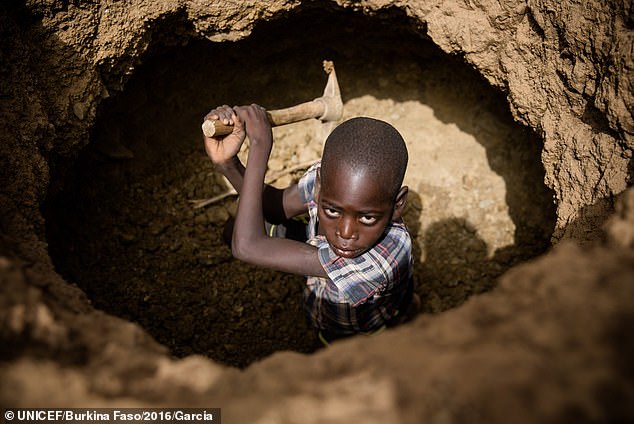 On the rocky ground of Nounou, in Burkina Faso, on a gold mining site, about 3000 people work every day, of which about 1000 are children

Her far-right Brothers of Italy party is part of a coalition that has made curbing immigration a key part of their agenda – with many of the migrants coming from the African continent.

“This is called the CFA franc,” Meloni began, holding up a West African CFA franc note. “It is the colonial currency that France prints for 14 African nations to which it applies seigniorage (a profit made by issuing currency) and by virtue of which it exploits the resources of these nations.”

Meloni then held up a photo of a young child working in one of the country’s gold mines.

A 2016 UN report suggested that of the 3,000 people working in a mine in Burkina Faso, a third are children.

‘This is a child who works in a gold mine in Burkina Faso. Burkina Faso is one of the poorest countries in the world. France prints colonial money for Burkina Faso, which has gold,” Meloni explained. 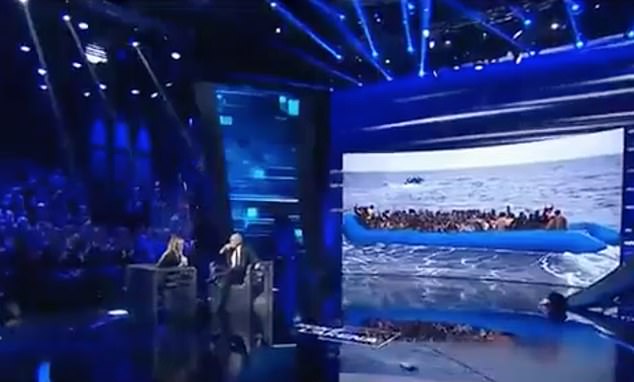 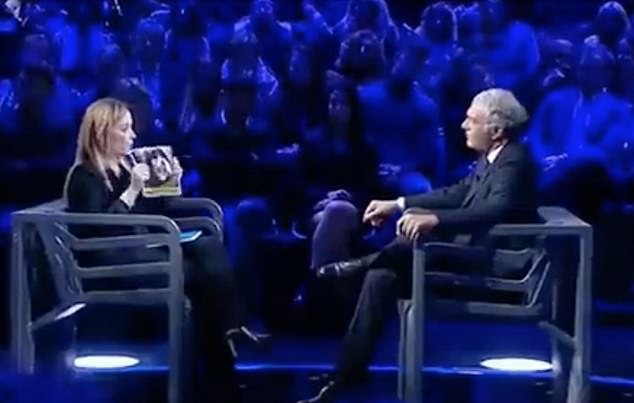 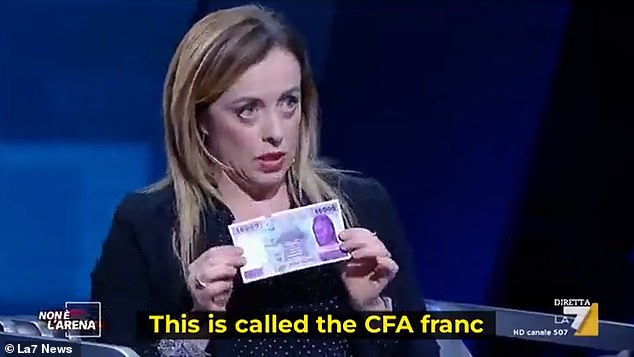 “This is called the CFA franc,” Meloni said, holding up a West African CFA franc note. “It is the colonial currency that France prints for 14 African nations … by virtue of which it exploits the resources of these nations.”

“In return, they demand that 50% of everything Burkina Faso exports end up in the coffers of the French treasury. The gold this kid is going to take through a tunnel usually ends up in the French state treasury,’ Meloni said, growing visibly angry.

‘So the solution is not to bring Africans to Europe. The solution is to free Africans from certain Europeans who exploit it and let these people live on what they have.’

Meloni wants the migrants to remain in their own countries rather than make the treacherous journey across the Mediterranean to the Italian coast. 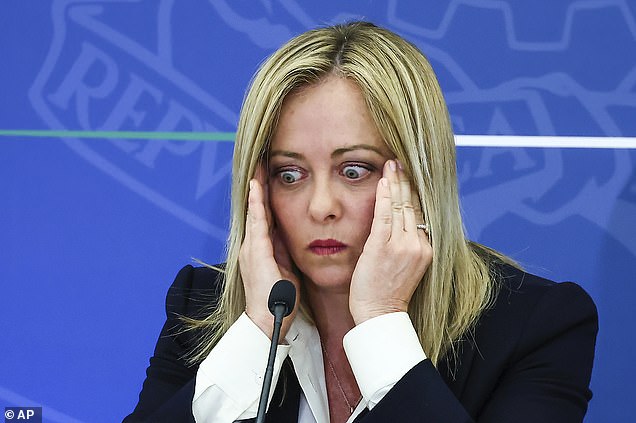 Last week, a rescue ship carrying more than 230 migrants was refused entry by Italy, but they were welcomed in France.

The Ocean Viking, operated by a French NGO, picked up the migrants near the Libyan coast before embarking on a week-long sea search for a port willing to take them.

The ship docked in the southern port of Toulon after Rome denied it entry.

The charity-run Ocean Viking ship carrying the migrants initially attempted to dock on the Italian coast, which is closest to where the migrants were picked up, stating that health and hygiene conditions on board were rapidly deteriorating .

But Italy refused entry to the ship, saying other countries would have to shoulder more of the burden of taking in the thousands of migrants who try to reach Europe from North Africa each year.

The refusal is part of Meloni’s new government regime, which only allows those identified as vulnerable to disembark. 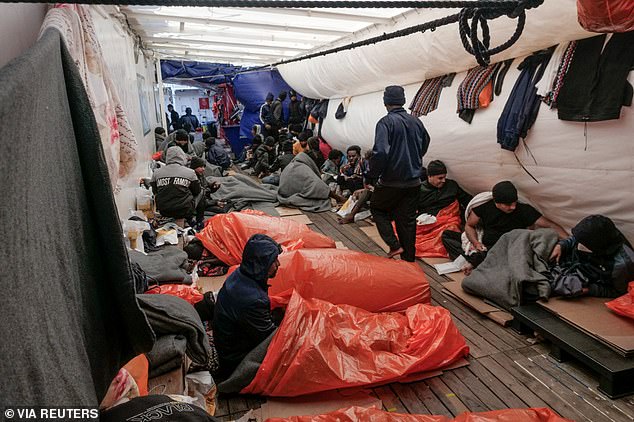 Italian authorities refused to disembark 35 migrants from a charity ship docked in Sicily (pictured: Migrants sleeping on the deck of the NGO rescue ship ‘Ocean Viking’)

Because immigration was a hot topic in both countries, unusually harsh words were exchanged between Paris and Rome.

France criticized Italy’s decision not to allow the ship to dock in Italy as “selfish” and “unacceptable”.

The confrontational stance of Meloni’s government is reminiscent of the standoffs orchestrated by Matteo Salvini, now Meloni’s infrastructure minister in charge of ports, during his brief 2018-2019 stint as interior minister.

Non-governmental organizations say that Italy has an obligation under maritime law to rescue people in distress and that coastal states are obliged to offer a safe haven as quickly as possible.

The UN’s International Organization for Migration has said 1,891 migrants have died or disappeared so far this year while trying to cross the Mediterranean in hopes of a better life in Europe.

Italy is one of the main gateways to Europe for many migrants. Since the beginning of this year, 70,000 migrants have arrived on boats on the country’s coast, TBEN News reports.

Meloni is trying to tighten the system and ensure that asylum seekers are strangled by such “irregular migration,” which Meloni says threatens the security and quality of life of Italian citizens. 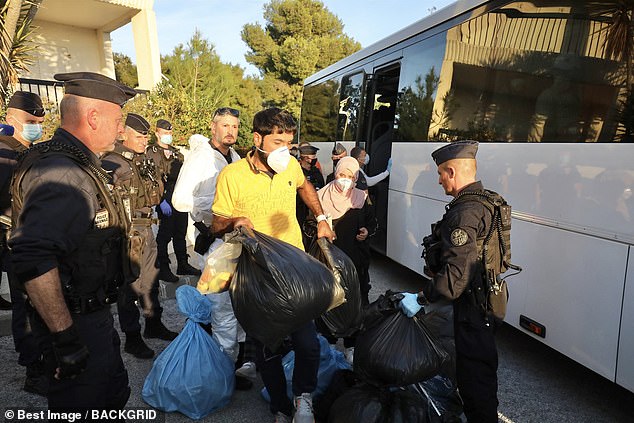 The ship docked in the southern port of Toulon last Friday after Rome denied it entry. In the photo – Migrants are transferred to the CCAS Center du Levant on the Giens peninsula

Child miners in Burkina Faso are paid a pittance as they crouch on the ground for dirt and stones, all of which are placed in bowls in the hope of finding gold, which may result in them getting some money in return.

Children work in the mines despite laws against it. Every day, young people are at risk of being seriously injured, not to mention poisoned from constant exposure to dust, toxic chemicals, and heavy handicrafts.

‘Burkinabe boys and girls are lured to the artisanal gold mines in the hope of a better life, but find themselves caught in a dead end circle of danger and despair. You can’t eliminate child labor in a community when the family’s income is so low,” said Marc Rubin, a UNICEF Burkina Faso Resident Representative.

“You need to address the issue of parental livelihoods, raise awareness about child labor laws, and build government capacity to monitor and enforce the laws. To prevent exploitative child labour, we must provide education, financing, vocational training and other work.’

In 2016, UNICEF reported the rescue of 25,000 children from gold mines across the country over a seven-year period.

French connections – A crust above the rest: French baguette on the UNESCO World Heritage List