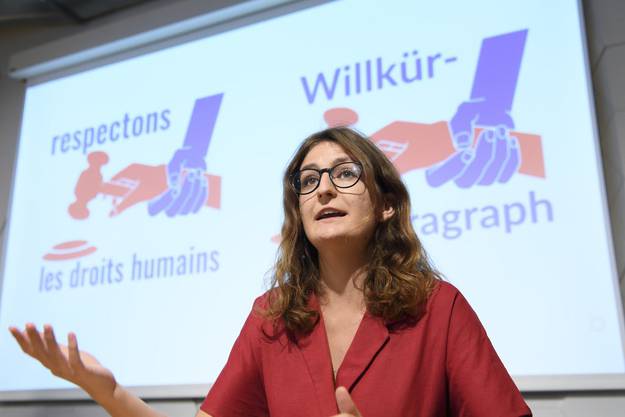 When the postman rings the doorbell, the young GLP knows it: he again brings boxes of new signatures to the secretariat. As of Monday alone, there were 16,000. Representatives of the committee, which includes the JGLP, Juso, the Young Greens and the Pirate Party, have counted signatures until midnight in recent days.

“It’s almost surreal,” said Sanija Ameti (JGLP), referendum coordinator. “In the past three weeks, we have collected 50,000 signatures.” Thursday, the referendum commission “No to the arbitrary paragraph” handed over 90,000 signatures to the Federal Chancellery. A small miracle.

On the same day, the “Friends of the Constitution” movement deposited more than 50,000 signatures against the terrorist law. She started collecting after ending her referendum against the Covid law in December with 85,000 signatures.

The young left-wing Green parties and the “Friends of the Constitution”, critics of Corona’s official policies, form an unholy alliance. Politically, they are moving away from each other. Therefore, you are deliberately not submitting the signatures together.

But it was the Friends of the Constitution who gave the Left Referendum Committee the conviction that the referendum could still be achieved. While they had already collected 15,000 signatures at the end of December, this showed that the referendum was still possible, despite the coronavirus.

As a result, a real signature boom took hold among the young parties. “An article in the ‘Republic’ generated a lot of reaction,” says Ameti. “And when the Echo der Zeit announced too early that the referendum had taken place, that gave a boost.”

It is also due to the fact that the mailing of the committee was surprisingly successful. At the same time, organizations such as the Group for a Switzerland without an Army (GSoA), Public Eye and Amnesty International Switzerland sent out newsletters.

The notifications from the Federal Chancellery were decisive

However, a decision by Parliament in October was crucial: the Federal Chancellery should certify signatures during the pandemic. It gave air to the committee. Certification typically takes two to three weeks. He could now use it to collect and count until the last day.

This enabled the referendum committee to put the 30,000 francs devoted to certification into the postal spirit. Coordinator Ameti: “If we had had to pay both, it would have been too expensive financially.”

Ameti admits she was “wrong” when she said democracy was no longer working. Because referendums would hardly take place in the event of a pandemic. “Democracy works. People can also be mobilized by mail, ”she said. “I wasn’t expecting that. Nonetheless, it would be nice if there was an electronic collection for a similar situation in the future.”

For network activist Daniel Graf, founder of the online platform Wecollect, it would make sense for the Federal Chancellery to continue to certify national referendums in the future. “To relieve the committees financially and logistically”, he emphasizes.

Communities would also be relieved

In this way, the 100 days available for collecting signatures in accordance with the constitution can be fully utilized. Municipalities would also be relieved, as they often received boxes of signature sheets shortly before the deadline.

The certification of a national referendum costs a committee “at least 50,000 francs,” says Graf. For citizens’ committees which are not supported by political parties or associations, it is “a lot of money and often a reason not to launch a referendum”.

Despite delivery bottlenecks at Pfizer / Biontech: cantons should move forward with vaccinations

Renegotiations with Brussels: Ms Leu has trouble breaking down

Guy Sebastian says it was ‘massive punishment’ to wait until marriage...

The Bharat Express News - January 22, 2021 0
Guy Sebastian admits it was 'massive punishment' to wait until marriage to...

Guy Sebastian says it was ‘massive punishment’ to wait until marriage...