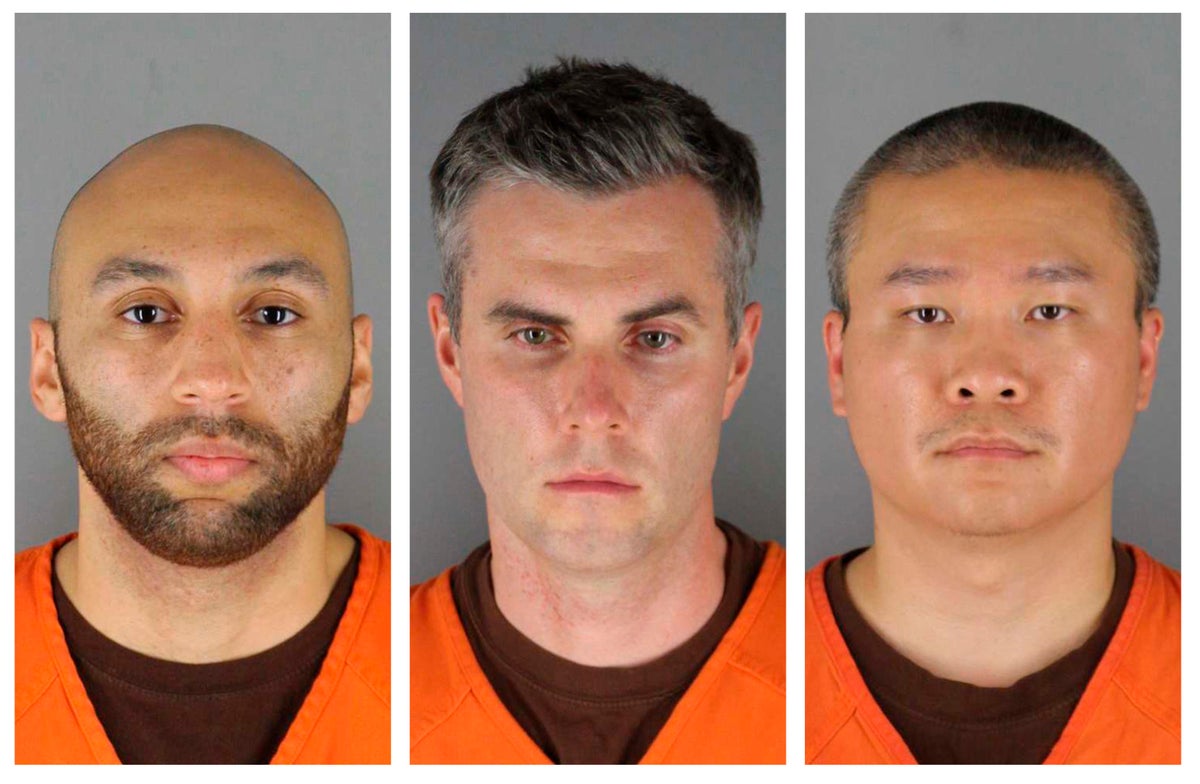 Former Minneapolis police officers J Alexander Kueng and Tou Thao have each been sentenced to more than three years in prison for violating George Floyd’s civil rights during his Memorial Day 2020 murder.

Both officers were convicted in February of two civil rights violations for failing to provide Floyd with medical attention and for failing to stop Derek Chauvin from killing him as he pressed the black man to the ground by the neck until he died.

US District Judge Paul Magnuson cited Thao’s significantly greater law enforcement experience as the reason for issuing a more severe sentence. Kueng was on the job for just a handful of days before Floyd’s fatal arrest for a counterfeit $20 bill. Thao was an experienced officer of eight years.

Wednesday’s sentencing made the pair the last of all four officers involved in Floyd’s death to learn their fate in federal court — more than two years after the murder sparked nationwide protests and renewed calls for racial slurs. justice.

Weeks earlier, convicted murderer Chauvin was given a 21-year sentence after pleading guilty to the civil rights charges, allowing him to avoid trial in exchange for moving from a high-security state prison to a safer, more comfortable federal facility.

In court on Wednesday, Judge Magnuson advised both Kueng and Thao to serve their sentences at a federal facility in Duluth, Minnesota, or in Yankton, South Dakota.

They will also serve under supervision every two years upon release. They must surrender to US Marshals on October 4.

The judge first sentenced Kueng to three years for each of his two charges, ordering him to serve them simultaneously.

When issuing the verdict, he said Kueng should have intervened that day, but deserved leniency because he grew up in a difficult neighborhood and wanted to become a “peaceful, helpful member of your community.”

He also mentioned his lack of experience on the job, saying “you really were a rookie officer”.

Prosecutors had argued that his lack of experience was no excuse, saying he “didn’t say a word — not a word” to try to stop Floyd’s murder.

Prior to his sentencing, Floyd’s second cousin Sabrina Montgomery addressed the court, condemning the sentences given to Lane and Chauvin, and urging the judge to give Kueng and Thao the harshest possible sentence.

Floyd’s girlfriend Courteney Ross also issued a victim statement calling the 46-year-old the “love of my life” and directly addressing Kueng about his part in his murder.

She told the officer that he had failed that day and called on him to “stand for something” upon his release from prison.

Kueng declined to make a statement to the court.

Ms. Ross had harsher words for Thao when she spoke prior to his sentencing, condemning his comments during her boyfriend’s murder and telling him to think of him when he’s “afraid” in his prison cell.

“As you watched my love get choked under your co-officer’s knee, I’ll never forget you saying to the crowd of onlookers, ‘This is why you don’t do drugs,'” she told him. “No one deserves to be treated as less.”

ALSO READ  Route of the Tour de France Femmes 2022: When does the race start, how long does each stage last and how can I follow live on TV?

She added: “I had seen my big, strong, muscular husband feel shocked and sad when he was in a small space. He didn’t try to resist that day, he was just so scared. If you get scared in that little prison cell, think about how Floyd felt.”

Thao decided to make a statement in court, citing quotes from the Bible and talking about turning to religion after his arrest.

Taking the stand at his trial in February, Thao had criticized prosecutors when asked why he wasn’t trying to stop Chauvin and shift the blame to the highest-ranking officer. “I think I would trust a 19-year veteran to find out,” he said.

Prosecutors had asked the judge to sentence Kueng and Thao to less than Chauvin, but “significantly” more than Lane — after Judge Magnuson said Lane played a “minimal role” in Floyd’s fatal arrest and the shamed officer a person with ” excellent character”. at his sentencing.

Thao’s lawyer asked the judge to sentence him to two years, while Kueng’s lawyer’s request was unclear because it was sealed.

Judge Magnuson was expected to make things easy for the two officers after siding with them last week over their sentencing guidelines.

During a court appearance Friday, the federal judge agreed that sentences for the disgraced officers should be calculated on the basis of the felony of involuntary manslaughter, rather than second-degree murder.

This paved the way for significantly fewer prison terms ranging from 4.25 to 5.25 years. The sentences handed down on Wednesday fell even shorter than this range.

The federal judge wrote that both Kueng and Thao were “tragicly misdiagnosed in their assessment of Mr Floyd,” saying they both sincerely believed the 46-year-old was suffering from a drug overdose and a widely disputed condition known for as “excited delirium”.

Lane, Kueng and Thao stood together for federal civil rights in February.

All three were convicted on one charge of depriving Floyd of his civil rights by failing to provide him with medical care, as he was wedged under Chauvin’s knee for nine and a half minutes while begging for air and begging “I can’t breathe.”

Kueng and Thao — who are still awaiting separate state trial — were also convicted of depriving Floyd of his civil rights by failing to intervene to stop Chauvin’s unreasonable use of force.

Kueng pressed Mr. Floyd onto his back, Lane kept his legs down, and Thao stopped a crowd of bystanders and stopped them from interfering.

Both Kueng and Lane were on the job for a few days, while Thao was an eight-year veteran of the Minneapolis Police Department.

Lane was only charged and convicted on one count, as he heard on bodycam footage and twice asked the other officers if they should reposition Floyd.

The verdict came after a month-long trial in which jurors heard how the three officers “chose to do nothing” to try to stop Chauvin or save the black man’s life as he lay dying under Chauvin’s knee.

The state trial has been postponed several times so far and is now expected to begin in January 2023.

Lane has avoided going to trial from the state after signing a plea deal with prosecutors in May.

Meanwhile, Chauvin is currently waiting to be transferred to federal prison after being sentenced to 21 years in early July.

He has since been behind bars in the Minnesota maximum security prison in Oak Park Heights.