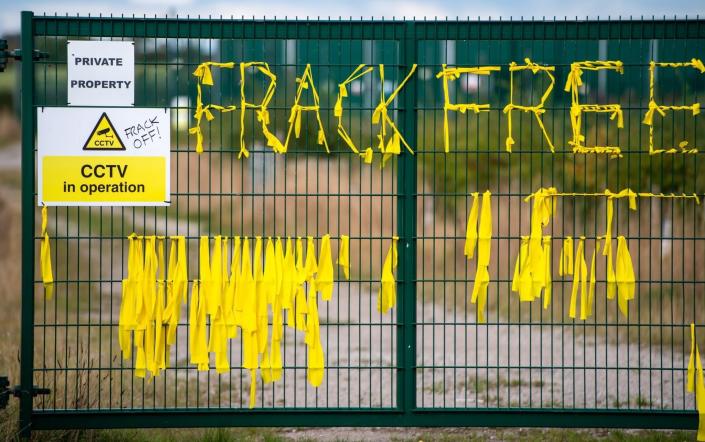 Opposition to fracking in the UK has been funded by the Putin regime, Jacob Rees-Mogg claimed Thursday, as he faced opposition from his own party for lifting a three-year moratorium on shale gas extraction.

The Business Secretary accused those who oppose fracking of “hysteria” and “ludditerie” and announced that drilling will resume in the “national interest” even if it risks causing earthquakes.

Ministers argue that access to reserves of underground shale gas will increase the UK’s energy security and could lower gas prices.

But the government will also face backlash in parliament, including from Conservative MPs who are not convinced locals will be consulted about the bore.

On Thursday, Mr Rees-Mogg told MPs he is “well aware” that there are those who support the fracking ban, but noted that Russia has funded some opposition to drilling.

“I am well aware that there are objections to fracking, but I also want to note that there are many reports that some of the opposition to … fracking has been funded by Mr Putin’s regime,” he said.

The claim was previously made by Anders Fogh Rasmussen, then NATO Secretary General, in 2014.

The defense chief said Russia was carrying out “advanced information and disinformation operations” to support opposition to shale gas in the UK.

A NATO spokesman later said that Mr Rasmussen was expressing a personal opinion.

Labor and the Liberal Democrats are both opposed to lifting the moratorium on fracking, describing it respectively as a “dangerous fantasy” and as a demonstration of “heartless disregard for our communities and the countryside”.

The fracking ban was first introduced by the Conservatives after the 2019 election, following a 2.9 on the Richter scale at a Lancashire site owned by Cuadrilla.

In April, after Russia’s invasion of Ukraine, ministers asked the British Geological Survey (BGS) to investigate the link between shale gas extraction and earthquakes.

The resulting report, published Thursday, concluded that predicting tremors remains a “scientific challenge for the geoscience community” and that more data is needed to accurately estimate the likelihood of seismic events.

But in a written statement to MPs on Thursday, Mr Rees-Mogg suggested it was worth taking the risk of further earthquakes and that more data could be collected when drilling resumes. “While the HM Government will always try to limit the inconvenience to those living and working close to sites, tolerating a higher degree of risk and disturbance seems to us in the national interest given the circumstances described above,” he said. .

“With this in mind, it is important that the policy on shale gas extraction is in line with this.”

The announcement was opposed by several Tory MPs in the Commons chamber.

Sir Greg Knight said: “Isn’t it true that predicting the occurrence of seismic events due to fracking remains a challenge for the experts?

“Isn’t it therefore risking an unknown amount to continue exploration for shale gas at this time?

“Is he aware that public safety is not a currency some of us choose to speculate in?”

Mark Menzies, a Lancashire Tory MP, said ministers should set out how they will get local authorization for fracking if Ms Truss is a “woman of her word”.

Mr Rees-Mogg said that while he had no “formal case” to announce about local consent, fracking companies will be asked to provide compensation packages for those living near their sites.

“We should not be ashamed to pay people who will be the ones who will not get the immediate benefit of the gas, but have the disruption,” he said.

He added: “The hysteria about seismicity, I think, does not understand that the Richter scale is a logarithmic scale.

“This (fracking) is of such importance, and it’s pure fun that is against it.”