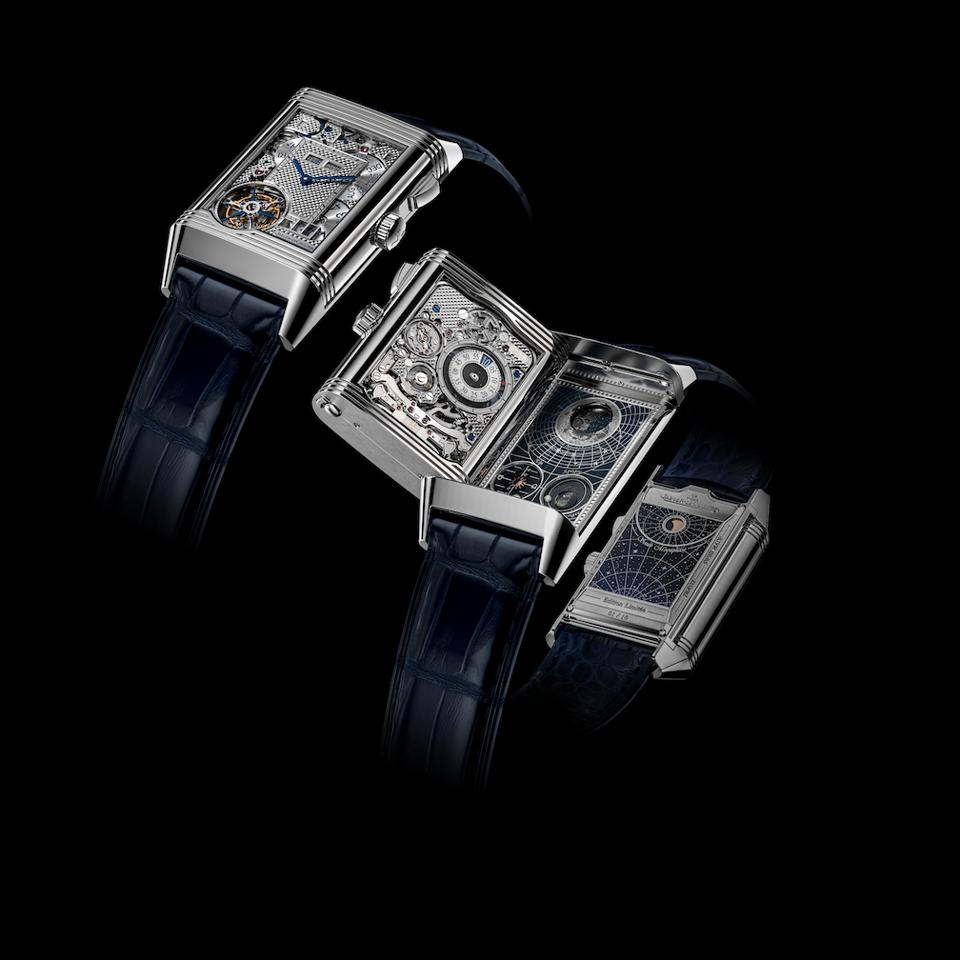 As Swiss watch brand Jaeger-LeCoultre celebrates the 90se anniversary of its legendary Reverso watch, it sets new world records with its Reverso Hybris Mechanica Caliber 185 Quadriptyque four-sided watch unveiled today at Watches & Wonders Geneva 2021. Six years in research and development, the 1 , 35 million dollars is the perfect showcase to display the expertise of the Manufacture. The new movement houses 11 different complications, has 12 patents and is the most complicated Reverso watch ever made by the brand.

The Reverso has a rich history dating back to 1931, when the brand responded to a request from India for a watch that could be worn during polo matches without damage. Jaeger-LeCoultre created a cradle that would hold the watch, which could be slipped out of its cradle, inverted and slid inside – displaying a metal reverse and protecting the watch face. The Reverso became an immediate hit, not only with polo players and men, but also with women. In the first decade alone, the watch quickly became an icon and was reinvented decade after decade. There was even a three-sided version, Triptyque, introduced in 2006.

The new Reverso Quadriptyque is the world’s first wristwatch with four different display faces thanks to a double-sided case and a double-sided cradle. The highly complicated 185 caliber (entirely manufactured in-house) incorporates a tourbillon escapement (to compensate for timing errors due to the effects of gravity on the watch), a perpetual calendar, a minute repeater and a complex celestial and astronomical system that offers three lunar displays (including Synodic Cycle, Draconic Cycle, and Anomalist Cycle) on the inner side of the Cradle that can predict supermoons and eclipses. Never before have these three lunar cycles been presented together on a wristwatch. It was a difficult feat that required 12 patents.

“Watchmaking is about respecting and using the past, focusing on the present and thinking about the future,” said Catherine Renier, CEO of Jaeger-LeCoultre during a presentation of the watch. “For this watch, the first challenge was to achieve all the complications that we wanted in terms of sound, celestiality, precision and know-how, so that we could demonstrate all the know-how of the manufacture. Then we chose to make it as thin as possible by using the cradles as well as the dials. ”

The intricate 185 caliber that powers this watch consists of 800 individual components that take approximately six months to assemble. Although each of the individual complications of this watch is already quite complex in itself, combining them into a rectangular shape and fulfilling the brand’s demands for the presentation of craftsmanship required incredible technical expertise and resulted in some unusual nuances. . For example, the perpetual calendar indications on this watch are all instantaneous, changing exactly at the stroke of midnight. At this point, the watch must be fully closed and inside the cradle as a special Jaeger-LeCoultre proprietary mechanical system engages and ensures that everything turns at the same time.

Because the watch has so many different settings, it could be a nightmare for anyone putting it down for too long and losing their power reserve. But the masters of Jaeger-LeCoultre have already thought of this and created a presentation box with an integrated mechanism drawer that automatically synchronizes the watch and sets the calendar and astronomical displays for the wearer. The system consists of a two-position crown that sets the number of days since it was worn, then in the second positions it updates any additional data on the watch.

Other innovations included a new date display and disc system which was necessary to be able to adapt the large date to 5:00 a.m. instead of 6:00 a.m. as the flying tourbillon escapement occupies the 7:00 position on the dial and the large date would be too big to hold at 6:00 am. Another key feature of this watch is its ringing functions. Jaeger-LeCoultre has been one of the few brands to manufacture repeaters and bells for almost two centuries. In fact, with over 200 striking watch calibers under its proverbial belt. The lever to activate the Quadriptyqe melody is just above the crown, and it releases the sound using three different combinations of low and high notes. It strikes the hours, quarter hours and minutes after quarter hours.

As the watch rings, it also offers the wearer a beautifully orchestrated dance of springs, hammers and gongs. This minute repeater, however, has crystal gongs that attach directly to the sapphire crystal for optimal acoustics. The system also offers a transparent chime without pausing between sounds by reversing certain steps of the mechanical process. The minute repeater holds several patents for the trigger, crystal gongs, gong shape and length, voiding void removal, quarter clock, and trebuchet hammers.

Among the 12 patents on the watch is another for the new quality date, new moon cycles, adjustment safety system, cradle screens and the new folding clasp. Indeed, the list of premieres of this hand-wound mechanical watch goes on and on. In short, however, a turn of the dial to dial reveals that the first face features the hour, minute, tourbillon, instantaneous perpetual calendar, reference date, day, month, leap year and year. day and night indicator. The second dial offers a digital hopping display of the hour, minutes and a minute repeater. The third side shows the phases of the moon in the northern hemisphere as well as the draconic lunar cycle (to show the height of the moon) and the anomalistic lunar cycle., Month and year. the fourth side shows the phases of the moon in the southern hemisphere.