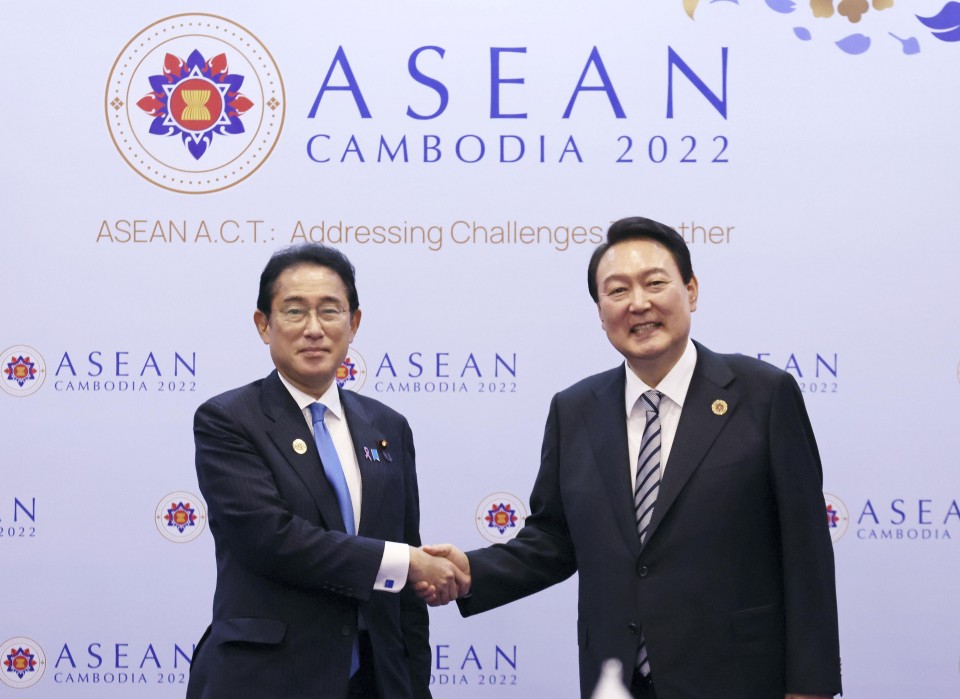 The deal came on the sidelines of summits involving the Association of Southeast Asian Nations and its partners in the Cambodian capital Phnom Penh. It was the first official meeting between leaders of the two countries in nearly three years.

“We will work for a swift resolution of the worrying cases,” Kishida told reporters after talks with Yoon, noting that discussions on the issues “accelerated” between their diplomatic authorities.

According to the Japanese Ministry of Foreign Affairs, the leaders confirmed that they will also continue communication at the leadership level.

Kishida said he and Yoon also agreed to work together towards the realization of a free and open Indo-Pacific, a vision advocated by Japan and the United States as a counterbalance to China’s maritime assertiveness in the region.

Momentum to change course has increased since conservative Yoon took office in May, promising to develop “forward-looking” relations between Seoul and Tokyo.

Japan and South Korea, long-time allies of the United States on security but whose ties are often shattered by historic disputes, last held a formal meeting between leaders in December 2019.

Kishida and Yoon sat in New York in September for a meeting of about 30 minutes on the sidelines of the annual session of the UN General Assembly, but it was completely closed to the media, with Tokyo and Seoul describing it as “informal”. .

The format and characterization of that first one-on-one meeting between Kishida and Yoon suggested how difficult and delicate it was to maintain bilateral ties after South Korea’s highest court ordered two Japanese companies to pay damages to Korean plaintiffs for forced labor in wartime.

The rulings, related to the Japanese colonial rule of the peninsula from 1910-1945, were issued in late 2018 under the tenure of Yoon’s predecessor Moon Jae In.

The companies have refused to abide by the rulings, in line with Japan’s stance that all claims arising from colonial rule were settled “fully and definitively” under a 1965 bilateral agreement. Tokyo Seoul grants and loans in the name of economic cooperation.

However, courts in South Korea have since ordered the liquidation of some of the assets of the firms in the country to compensate the plaintiffs.

On Sunday, Kishida and Yoon condemned North Korea’s repeated ballistic missile launches as a “serious and imminent threat” to security in the region, while reaffirming that they will continue to work closely together to counter the unusually rapid pace of weapons demonstrations in Pyongyang. address, the ministry said.

Yoon said in late October that North Korea appears to have completed preparations for its seventh nuclear test, its first since September 2017.

According to the ministry, Kishida also received strong support from Yoon regarding the abduction of Japanese nationals by North Korea in the 1970s and 1980s.

The leaders expressed expectations for further person-to-person exchanges following the reintroduction of reciprocal visa waivers as part of the easing of border controls from COVID-19, it said.

FOCUS: 1 month after Itaewon’s crush was blamed by the government, families are demanding the truth