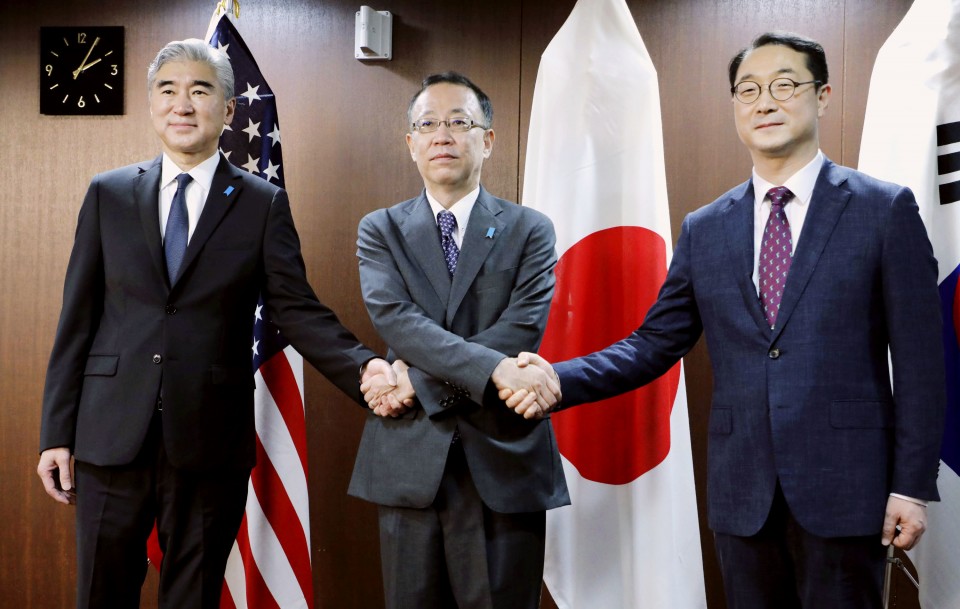 Senior diplomats from Japan, the United States and South Korea pledged on Wednesday to take “specific steps” if North Korea conducts a nuclear test, a Japanese foreign ministry official said, raising fears of such a provocation.

The agreement came about at a trilateral meeting in Tokyo between Takehiro Funakoshi, director general of Japan’s Foreign Ministry’s Bureau of Asian and Ocean Affairs, and his US and South Korean colleagues, Sung Kim and Kim Gunn.

(Van L) US Special Representative for North Korea Sung Kim, Takehiro Funakoshi, Director General of the Asian and Oceanic Affairs Office of the Japanese Ministry of Foreign Affairs, and Kim Gunn, South Korea’s Special Representative for peace and security affairs in the Korean peninsula, pose for photos as they meet in Tokyo for trilateral talks on September 7, 2022. (Pool photo) (TBEN)

They also agreed to continue to promote security cooperation between the three countries to strengthen their deterrence against North Korea, which the ministry says has launched ballistic missiles in defiance of a series of UN Security Council resolutions.

North Korea is said to have completed preparations for its seventh nuclear test and the first since September 2017, with speculation mounting that the Asian country could conduct it soon.

The three shared “serious concern” that Pyongyang has accelerated nuclear weapons and missile development, and agreed on the need for “resolute responses” in the event of a nuclear test, the official said. He would not say what measures they could take.

The diplomats also referred to news that Russia, hit by economic sanctions imposed by Western countries since late February over its invasion of Ukraine, has been buying missiles and artillery shells from North Korea, the official told reporters.

“In general, we shared the view that any importation of arms and related supplies from North Korea violates relevant UN resolutions,” the official added.

During the nearly two-hour meeting, South Korean Kim spoke about President Yoon Suk Yeol’s “daring initiatives,” including economic aid to the north as the country takes practical steps toward denuclearization, the official said.

The two also agreed to continue communicating “to resolve the pending issues” between the two nations, the Japanese government said, as their relations deteriorated under the former administration of President Moon Jae In, known as an anti-Japanese politician. .

Shin told reporters the two discussed an alleged lock-on of fire control radar on a Japanese self-defense patrol plane by a South Korean destroyer in December 2018, adding that they will continue to discuss the matter.

US, Japan eye for cooperation for “any situation” amid tensions in Taiwan

Japan, US and South Korea pledge to work closely together to counter North Korea