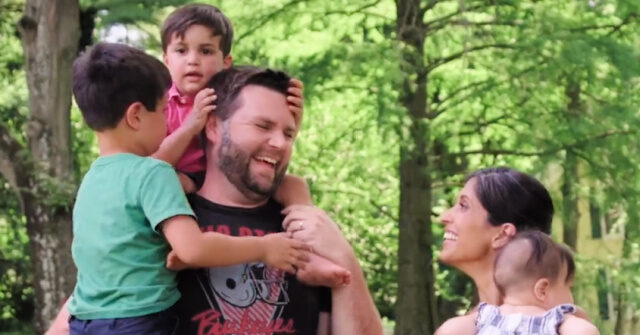 “I love our first ad, where my favorite person tells my story,” Vance announced. “We fight for Ohio because it’s our home, and when I was a kid, Ohio gave me a chance.”

In the 30-second ad, Usha gives a brief summary of Vance’s life, as popularized in his book Hillbilly Elegy and the Ron Howard-directed film starring Glenn Close and Amy Adams.

“Our family story is an Ohio story,” begins Usha.

Usha recalled JD’s difficult beginnings in Middletown, Ohio, dealing with a mother struggling with addiction and an absent father.

“My husband, JD, grew up in Middletown and it wasn’t easy,” continued Usha. “His mother was struggling with an addiction and his father was not there. But JD was lucky. He was raised by his loving grandmother and served his country as a Marine in Iraq.”

The ad ended by greeting Vance as “an incredible father” and a wonderful husband who wants to give Ohio what the state has given him: “A fighting chance.”

“He’s an incredible dad and he’s my best friend,” she concluded. “JD shared his family story Hillbilly Elegy and he wants for Ohio what Ohio has given him: a fighting chance.”

I love our first ad, where my favorite person tells my story. We fight for Ohio because it’s our home, and when I was a kid, Ohio gave me a chance. pic.twitter.com/4RfeAofrIm

JD Vance ran along the coast to become the Republican nominee in Ohio’s Senate race after former President Donald Trump approved his candidacy, hailing him as “our best shot at victory in what could be a very tough race.”

“The Democrats will spend many millions of dollars, but the good news is they have a flawed candidate who ran for president and got exactly zero percent in the polls. The bottom line is that we need to get a Republican victory in Ohio,” Trump said.

“This is not an easy endorsement for me because I like and respect some of the other candidates in the race – they’ve said great things about ‘Trump’ and like me, they love Ohio and our country,” he said. continued. “I’ve studied this race closely and I think JD is most likely to take out the weak, but dangerous, Democratic opponent – dangerous because they have so much money to spend.”