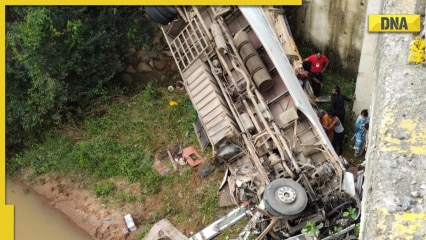 In the Hazaribagh district of Jharkhand, a bus slid down from a bridge over the Siwan River on Saturday afternoon, killing up to seven passengers and injuring several others, ANI news agency reported.

“The injured are being treated in different hospitals. The bus went from Giridih to Ranchi,” ANI quoted the Hazaribagh SP as saying.

Jharkhand | 7 dead and 12-13 injured when a bus carrying passengers fell off the bridge over the Siwan River this afternoon. The injured are being treated in various hospitals. Bus went to Ranchi from Giridih: SP Hazaribagh pic.twitter.com/FkzUdUouMh— ANI (@ANI) September 17, 2022

The accident happened when the Ranchi bus coming from Giridih district broke the railing of a bridge and fell on a dry spot in the Siwanne River in Tatijharia Police Station, Police Chief Inspector Manoj Ratan Chothe said.

“Two passengers died at the scene, while four others were pronounced dead by doctors at Sadar Hospital in Hazaribag. The number of fatalities could rise as some are seriously injured. We are preparing to take them to Rajendra Institute of Medical Science (RIMS) ) to Ranchi for better treatment,” he said.

A DSP officer and three responsible police stations have been sent to the scene to oversee the rescue operation, the SP added.

Prime Minister Narendra Modi has expressed grief over the loss of life in the accident and prayed for the recovery of those injured.

“Disturbed by the loss of life in the bus accident in Hazaribagh district, Jharkhand. At this tragic hour, my thoughts are with the bereaved. I pray that the injured recover quickly,” PMO wrote on Twitter.

Distressed by the loss of life in the bus accident in Hazaribagh district, Jharkhand. At this tragic hour, my thoughts are with the bereaved. Pray that the injured recover quickly: PM @narendramodi— PMO India (@PMOIndia) September 17, 2022

On Twitter, Jharkhand Chief Minister Hemant Soren said: “I am saddened by the death of passengers due to the bus falling off the bridge in Tatijharia. May God grant peace to the departed souls and give strength to the bereaved families to bear this sad Relief and rescue operations are carried out by the district administration. I wish the injured a speedy recovery.”