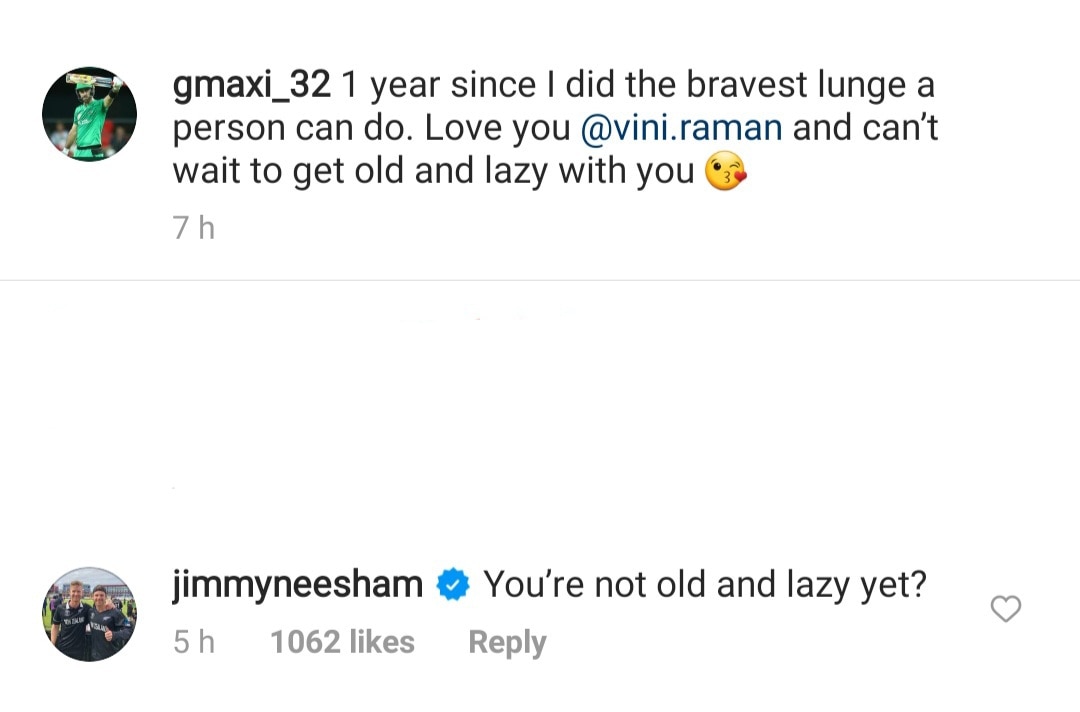 Versatile Australian Glenn Maxwell took to social media to celebrate one year of his engagement to Indian-born pharmacist Vini Raman. However, he had no idea that on his celebratory message he will be trolled, oddly though, by his friend across the border, Jimmy Neesham.

Maxwell, who got engaged to Raman on February 20, shared an adorable photo with his fiancee and wrote: “1 year since I made the bravest lunge a person can do. love @ vini.raman and can’t wait to get old and lazy with you. “

However, it was Neesham’s response that grabbed the attention and drove fans into a frenzy. Neesham, in his usual witty style, replied, “Aren’t you old and lazy yet?”

This isn’t the first time that Neesham has been part of a conversation involving both Maxwell and Raman. Vini Raman, while wishing Maxwell his birthday last October, wrote: “Happy Birthday @ gmaxi_32 aka my favorite fiance aka my only fiance aka BEST fiance ever. Ps. I love you more than @jimmyneesham.”

Maxwell and Neesham became great friends during the last IPL, when they were both part of the Kings XI Punjab franchise. Both were released by the franchise ahead of the upcoming Indian Premier League (IPL) season. After which, Maxwell was chosen by the Royal Challengers Bangalore (RCB) for a whopping sum of INR 14.25 crore, while Neesham was chosen by the Mumbai Indians at his base price of INR 50 Lakh.

The two will be against each other from Monday to represent their national teams as New Zealand host Australia for a five-game T20I series.

India vs England: Anushka Sharma and her daughter Vamika join Virat Kohli in Ahmedabad and share a photo on social media