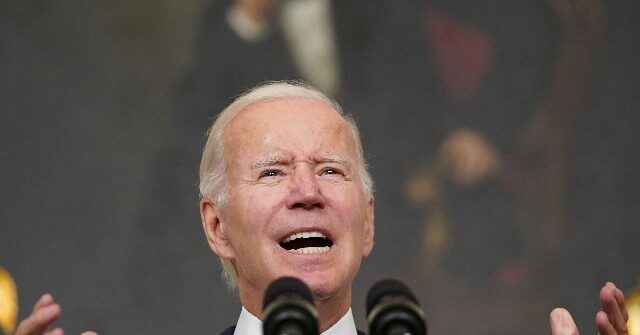 President Joe Biden turned defensive at the White House on Thursday after insisting that the United States economy does not go through a recession during his watch.

“That doesn’t seem like a recession to me,” he said after reading a list of positive economic news from his card.

The president spoke of the idea of ​​a recession after GDP figures released Thursday showed the economy contracted 0.9 percent in the second quarter of 2022.

He turned to positive economic news.

He also pointed to investments in the production of electric batteries and semiconductor chips as proof that the economy is not going through a recession.

The president also claimed that Federal Reserve Chairman Jerome Powell said the economy is not currently in recession, which was a slight exaggeration of what the chairman actually said.

“It doesn’t make sense that the economy would be in recession,” Powell said Wednesday after announcing another rate hike to try to cool inflation.

The president also claimed that a new Senate Democrat proposal to spend $370 billion to subsidize the wind and solar industries, as well as the electric car industry, would only help the economy grow.

He described the new spending agreement as “a major problem” and urged Congress to approve it, despite the goal of raising taxes and $430 billion in new spending.