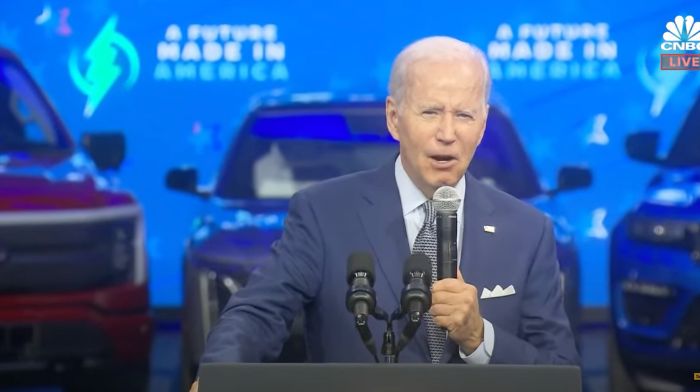 It is apparently now the official White House talking point for Democrats for the midterm elections.

During a fundraising drive in Detroit for Michigan Governor Gretchen Whitmer on Wednesday, President Joe Biden launched another fiery diatribe against the so-called “MAGA forces,” described by Biden as a “threat to democracy.”

The latest attack came after a speech he gave two weeks ago that basically had no other purpose than to attack former President Donald Trump and those who support him.

MAGA Republicans are a threat to Joe Biden’s power, nothing else.

Biden, of course, started with January 6 and “The Big Lie.”

Extreme Republicans don’t just threaten our personal rights and economic security, they embrace political violence. Just look at January 6 – what they say. They refuse to accept the will of the people. Watch them push the Big Lie all the time. They threaten our own democracy. I get criticized – I’m not going to take the time, but I got criticized for saying they are a threat to democracy. Well, a threat to democracy can almost be defined by saying: if you incite or defend political violence, and you do not allow a legitimate transfer of power, then democracy is in jeopardy.

It seems obvious that this is a line of attack aimed at a group, providing a handy cover that would otherwise force the president to talk about his horrendous track record of soaring inflation, skyrocketing crime and murder rates, and perceived weakness. abroad.

It’s also pretty funny to listen to Democrats talk about “the will of the people.” To this day, Hillary Clinton believes the 2016 election was stolen from her. The same goes for former President Jimmy Carter.

Every election the Democrats have lost in recent history, they have contested.

They contested both victories of former President George W. Bush in 2000 and 2004. Who can forget “hanging chad”?

And they ran in the 2016 election. Many still believe that Donald Trump is not only evil, but has not been properly elected.

-REPUBLICANS-
We’d better wake up soon. See what happens under direct orders from
JOE BIDEN!
They target all Trumps (MAGA)
supporters and voters. They go after ALL Republicans with power, wealth or influence.
This is a strategic attack…

Joe Biden continued to invoke the January 6 “uprising,” saying this about “MAGA Republicans”:

Since when have Democrats been such staunch defenders of law enforcement? Biden has been fighting for years with parts of his party who demand we “don’t pay the police”.

All summer of 2020, when America’s cities were on fire, there was nothing but silence from the Democrats. Unless they called for the rescue of rioters like Joe’s vice president, Kamala Harris.

If you are able, sign up now for the @MNFreedomFund to pay bail for those protesting on the ground in Minnesota. https://t.co/t8LXowKIbw

Joe Biden also wants you to believe that Republicans are calling for political violence. Another of the Democrats’ biggest hits: Rep. Maxine Waters (D-CA) is calling on people to “create a mob” around anyone associated with the Trump administration.

Was it rabid “MAGA troops” that Rep. Shot and nearly killed Steve Scalise (R-LA) while practicing for a charity baseball game with other Republicans?

What about the man who got to the point of standing in front of Supreme Court Judge Brett Kavanaugh’s house, then called 911 and stated he was there to kill Kavanaugh for overthrowing Roe v. Wade? Trump supporter, right? No.

Yesterday, Senator Maizie Hirono (D-HI) called for a “literal call to arms” against the pro-life movement in response to Senator Lindsey Graham (R-SC)’s proposal for a national ban on abortion after 15 weeks. Is that a call for peaceful protest?

“MAGA Republicans are the worst, Biden says. But he can’t decide if he means all Republicans.”

Well, maybe not all Republicans

Joe Biden ended his speech by calling on Michiganders to vote.

Therefore, those who love this country – Democrats, Independents, mainstream Republicans – must be stronger, more determined and more committed to saving American democracy than the extreme MAGA Republicans to destroy American democracy. We must organize, we must mobilize and we must vote. Go out and vote.

The tame end of the Michigan speech is reminiscent of the day after Biden’s creepy red-backed speech warning the nation against MAGA Republicans.

Reporters asked if he viewed all Trump supporters as a threat to the country. His response:

“Come on, guys, you keep trying to defend that case. I don’t see any Trump supporter as a threat to the country,” “I think anyone who calls for the use of violence does not condemn violence when it is used, refuses to recognize when an election has been won, urges the changing the way they can count votes is a threat to democracy. When people voted for Donald Trump and now support him, they weren’t voting for an attack on the Capitol, they weren’t voting for ignoring an election, they were voting for a philosophy he put forth.”

Maybe Joe Biden was for MAGA Republicans before he was against them.

President Joe Biden is in every way the authoritarian person he accuses the “MAGA Republicans” of.

“Always blame your enemy for what you do” – Josef Goebbels