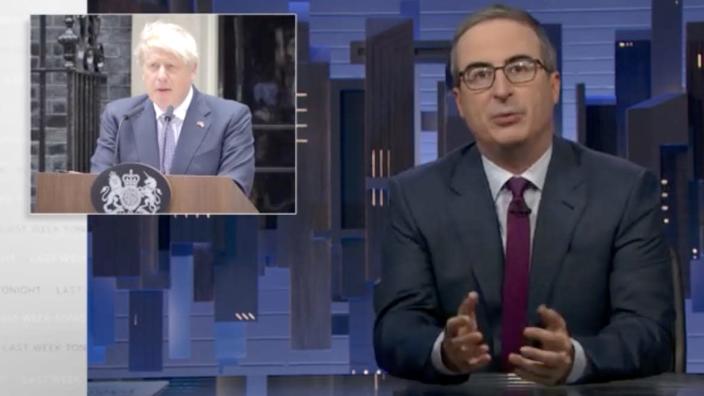 After celebrating his return from a month-long absence by brutally roasting Republican blowhard Josh Hawley, John Oliver returned to Last week tonight on Sunday, kicking things off by addressing the resignation of Prime Minister Boris Johnson, the UK’s buffoon-like and Trumpian leader who stepped down on July 7 after several members of his own Conservative party resigned from parliament over his scandal-plagued government.

“Boris Johnson finally resigned earlier this month after succumbing to a string of scandals – offering this inspiring farewell,” Oliver said.

A speech by Johnson was played where the limp, crippled duck announced, “I want you to know how sad I am to give up the best job in the world. But those are the breaks.”

“Yes, those are the breaks‘ Oliver burst out. “You know, sometimes you push your country off a huge economic cliff for no reason; then attend a series of alcoholic bashes that violate your own government’s COVID lockdowns; then promote a member of your own party [Chris Pincher] accused of sexual misconduct, later claiming you knew nothing about it – only to show that wasn’t true; and that a large part of your government is resigning instead of continuing to work for you. You know, the breaks.”

One of the main contenders for Johnson’s longtime appearance is Rishi Sunak, a Conservative Party member who has been busy wading around in culture war filth and attacking “woke nonsense” — as one does today when they don’t have actual policy positions from Note.

According to Oliver, Sunak is “an incredibly wealthy man who was educated at one of the most exclusive private schools in England – although it did not seem to teach him successfully what to do with his arms.”

The strip then pitched to a clip of Sunak gesturing wildly during a speech captured on what appeared to be an old phone camera.

“What are you doing?!” exclaimed Oliver, mimicking Sunak’s arm movements. “What is it with rich people and hand movements? Sunak looks like he studied at the Zuckerberg School of Passing for a Human. And that’s not even a one-time thing. He moves his hands like this all the time! And normally you want your hands to support and accentuate what you’re saying, not to look like you’re in a boxing match with a hundred invisible mice!”

Then there’s Sunak’s conservative Liz Truss, who is equally clumsy during speeches, somehow left a tweet praising the monstrous late pedophile Jimmy Savile, and, when asked on the TBEN in 2019 how many of As the 200,000 new starter homes she promised to build in 2014 came to fruition, she stumbled before the host replied, “Well, it’s easy to remember: It’s zero. You haven’t built one.”

“So, none of the leader options are good here, and the fact is whoever wins will inherit a poisoned chalice,” he continued. “Boris Johnson, the man they both helped for years, broke a lot of junk that they now have to clean up.”