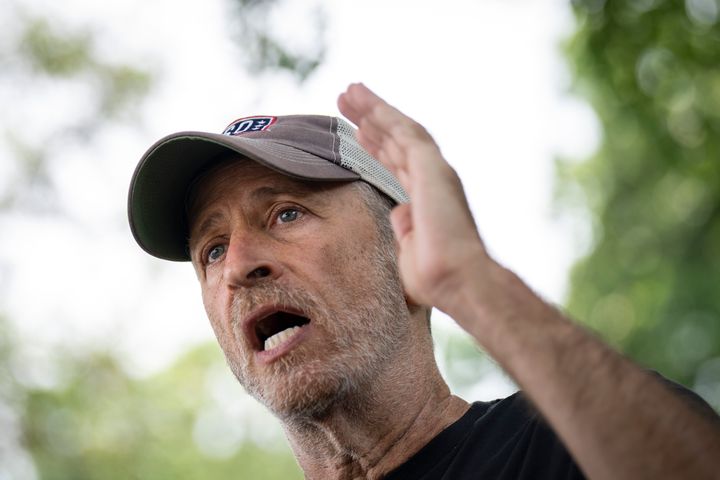 Former “Daily Show” host Jon Stewart on Thursday attacked Republicans as “senators with a stab in the back” after they blocked the passage of a bill that would expand health care coverage for military veterans.

“If this is America first, then America sucks,” said an exasperated Stewart.

Surrounded by a group of veterans on Capitol Hill, the comedian spoke to reporters after GOP senators withdrew support for a bill designed to help people suffering from Agent Orange exposure in Vietnam and into toxic pits full of burnt military waste. Iraq and Afghanistan.

Although the bill, known as the Honoring our Pact Act, passed by the Senate earlier this year by 84 to 14 votes, 25 Republicans who previously supported it withdrew their support in Wednesday’s follow-up vote.

The sudden turnaround came as a surprise to many—and an outrage to Stewart, a longtime advocate for veterans and first responders on 9/11.

“Isn’t this bitch,” Stewart said. “America’s heroes who fought in our wars, outside sweating their asses, with oxygen, fighting all kinds of ailments, while these bastards sit in the air conditioning, walled in with whatever.”

“These are men and women, mothers and fathers, sisters and brothers that we just leave out in the heat if they can’t breathe,” he continued, gesturing to the veterans who showed up with him.

Agent Orange — a potent herbicide that the US government sprayed on forests in Vietnam, Cambodia and Laos from 1961 to 1971 — is now known to cause cancer, heart disease, severe organ dysfunction, painful skin conditions, and neurological and psychological damage.

Burn pits have been linked to several types of cancer. President Joe Biden has raised the possibility that burn exposure in Iraq contributed to his late son Beau Biden’s fatal brain cancer diagnosis.

“Boy, they haven’t been through a war they don’t want to sign up for, and they haven’t met a veteran they don’t screw up. What the hell are we?” shouted Stewart, who currently hosts “The Problem with Jon Stewart” on Apple TV+.

A Republican who voted against the measure, Senator Patrick Toomey (Pa.), said he opposed a “budgetary gimmick” that would bring in $400 billion in additional spending, and urged his colleagues to vote against the bill. .

sen. Kirsten Gillibrand (DN.Y.) was one of the Democrats shocked by her colleagues’ move.

“How he convinced 25 of his colleagues to change their vote, I have no idea. I mean, what the hell?” Gillibrand said at her own press conference on Thursday.

Stewart also went after Senator Rick Scott (R-Fla.), who voted against the bill after tweeting pictures of him making care packages for veterans.

“Did you receive the package?” said Stewart mockingly. “I think there’s M&Ms in there, and some cookies and some damp towels. Frankly, I don’t know what to say. I’ve been coming down for 10 to 15 years I’m used to the hypocrisy.”

Stewart has repeatedly appeared before Congress and on late night shows to push for bills that help veterans and first responders. He is often credited with helping break a deadlock in Congress on such issues.

Donald Trump Says Americans Are Angry Over ‘Attack On Democracy’