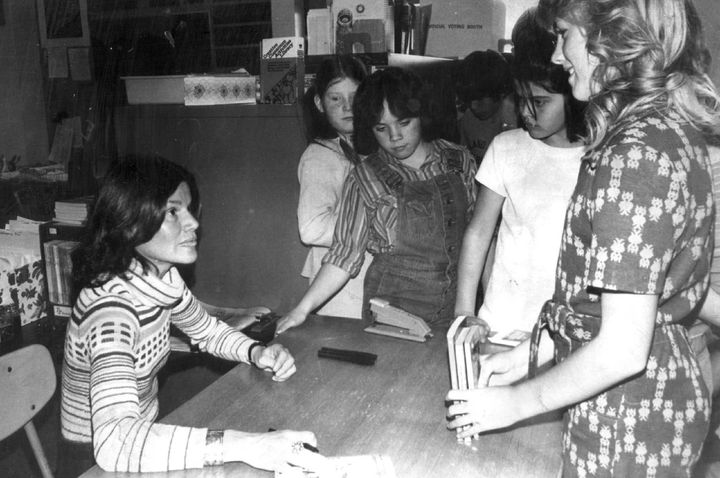 It’s almost always the case that when you’re talking about a reputable, older piece of art, someone will feel the need to qualify it by saying, “It holds up really well.” As if to say that good art decays or somehow becomes unimportant once it reaches a certain age, and cannot possibly stand as a pop culture document of its time as it should. It’s reductive.

But this thought came to my mind while watching “Judy Blume Forever,” a new documentary premiering at this year’s Sundance Film Festival that explores the young adult author’s life and social impact.

As directors Davina Pardo and Leah Wolchok explore in the film, Blume rose to fame with the seminal 1970 book Are You There God? It’s me, Margaret.’ It is a coming-of-age story about an almost 12-year-old girl who is fascinated by her changing body, her friends, boys, sex, faith and her first period.

Written in the first person, the titular character speaks candidly to her equally young and curious readers, asking the same burning, seemingly rhetorical questions that preoccupy them. It was one of the few books of its kind to confront the things kids weren’t supposed to think, let alone say out loud. So of course they flocked to it.

Parents and other adults banned it, even challenged and banned the book over the years since its publication. But kids needed this close dialogue with a young person who got it — even though Margaret came from the mind of a then 32-year-old.

That dichotomy is at the heart of “Judy Blume Forever,” which pursues questions of youth, age, and what makes a work so loved by young and old alike as “Are You There God?” It’s Me, Margaret’, a book that is timeless and ageless at the same time, as one person in the film suggests.

Much of that is answered through intimate interviews with Blume, now 84 years old. She reflects on how she was a young mother of two in a white New Jersey suburb, increasingly miserable as a stay-at-home woman and began to realize that she had much more to give than just being a housewife, which was expected of her and so many other women like her at the time.

Writing books became a way to liberate herself as a wife and as her younger self whose innermost thoughts were stifled in a society and home that did not encourage them. It was also a way to relate more to her own children, who were going through some of the same things she did at their age.

So came other books—including “Tales of a Fourth Grade Nothing,” “Blubber,” and “Starring Sally J. Freedman As Herself”—that challenged censorship and more common and accepted depictions of girls and women.

As “Judy Blume Forever” underscores, her books confronted cycles of female repression and Puritan frenzy that remain as relevant as ever when Roe v. Wade has fallen and the list of banned books remains a source of debate.

Blume fought for her own voice, along with that of women and young adults, through her books and in interviews, in response to the angry questions thrown at her by male journalists and politicians alike who accused her of being too obsessed with sex in her books. .

Perhaps that’s why “Judy Blume Forever” features interviews with some of her biggest fans from a variety of racial and class backgrounds — including her now-adult readers who include sex educators, actors like Anna Konkle, and YA author Jacqueline Woodson.

It’s interesting to watch: a white female author who wrote almost exclusively white, binary characters that resonated with queer, black, Asian-American readers, and many others across the identity spectrum. Part of that is that, unlike today, authors who were queer and/or people of color were almost absent from many schools’ reading lists.

Presumably Blume, like so many white authors now, did not feel compelled to contend with her own shortsightedness. However, the devotees who grew up with her books explore this again in the film, even though the author herself is strangely not asked about it.

But even with the author’s lack of cultural awareness in her books, her fans still cling to their themes – from suicidal thoughts, first loves and bullying to self-esteem. Their admiration for her work goes beyond whether it fits all the right cultural frameworks as defined by today’s society.

Even today, the most progressive teen and pre-teen voices can still read a line from one of her books that comforts them familiarly, as seen in several scenes in “Judy Blume Forever.”

This question of timelessness echoes in “Going to Mars: The Nikki Giovanni Project” from directors Michèle Stephenson and Joe Brewster, another documentary premiering at Sundance that traces the legacy of an acclaimed author. As the film’s title suggests, Giovanni, known both for her books and her poignant poetry, has always been a woman who sees herself beyond the boundaries of the imagination.

So, of course, in the documentary, Giovanni talks about himself, and black women in general, as alien – a long-held belief that predated the phrase “Black girl magic.”

There’s a sense that when Giovanni, a staple in the Black Arts Movement, proclaims this about himself, it’s not an affirmation as it is with the ubiquitous phrase, but rather an indisputable truth.

That’s why when she speaks of herself – whether at age 79 or in 1979 when she came face to face with James Baldwin, an equally candid man who is 20 years her senior – it is measured, contemplative and his ahead of time.

Perhaps that’s why much of “Going to Mars” slips effortlessly from past to present into a future that is somehow clear in Giovanni’s eyes, telling both her personal history and that of the world she’s lived in .

So does the pain of her years of estrangement from her son Thomas, who more recently has re-entered her life with his wife and teenage daughter Kai, all of whom appear affectionately in the documentary. There’s also the story of Giovanni meeting her now-wife, Virginia, and navigating her own cancer diagnosis.

The film looks back on the conversation with Baldwin and reflects on Giovanni growing up in a Tennessee home where her father physically abused her mother, clearly stating that he was a man who had been dehumanized by a white system and felt entitled to live through abuse to regain a sense of power. And what do you do with that, she thought aloud to the author of “If Beale Street Could Talk” in their 1979 conversation.

Since Giovanni has always told us exactly who she is, watching a documentary about her seems almost superfluous at times. “Going to Mars” gives us a glimpse into the author’s inner life, often revisiting her many volumes of poetry, including 1968’s “Black Judgment,” an unashamed insult to the white lens on Black America.

The documentary rightly references the poem “Nikki-Rosa” to underline Giovanni’s authority over her own story. The words, quoted eerily by the film’s executive producer Taraji P. Henson in her narration throughout the film, are more powerful than ever:

“I really hope no white person ever has a reason/ to write about me/ because they never understand/ Black love is black wealth/ and they will/ probably talk about my troubled childhood/ and never understand that/ all the time that I’m rather merry.”

Even now in the culture we talk about the problems of negotiating our blackness, our womanhood and giving away our power to those who don’t care. Giovanni wrote about these subjects years earlier, in a world that was fighting the same struggles we do today over equality, sexual freedom and misogyny, both within and outside the community.

That’s why her other works, like 1983’s “Those Who Ride the Night Winds,” and even her more personal writings like 2007’s “Acolytes” and 2020’s “Make It Rain,” feel like prescient material. Because, like Blume, Giovanni has always had a knack for speaking directly to an audience in need. And readers still need to hear it.

While it’s a little depressing that this battle for basic human existence is still relevant today, it’s nice to see how many people are involved in this battle, that Giovanni continues to be at the forefront of the fight and that they help people of different generations.

Just as “Judy Blume Forever” highlights the author’s connection to fans new and old, “Going to Mars: The Nikki Giovanni Project” heads to the author’s still-packed readings where audiences are nodding their heads and laughing with her. while she jokes and reads. from one of her books. That kind of involvement is immortal.

Because everyone, regardless of age and how much time has passed, could use a reminder of who they are and where they need to go.