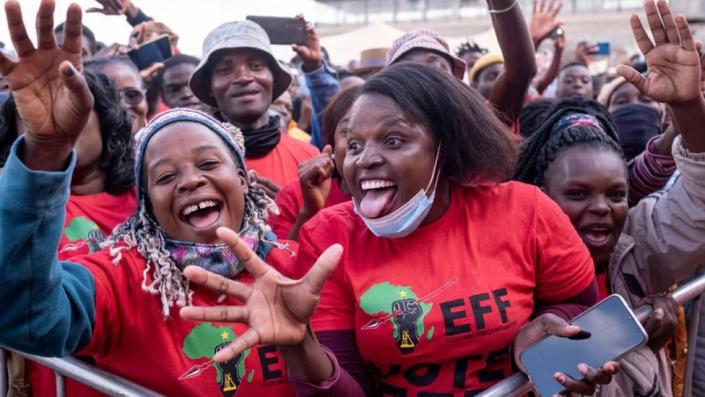 The controversial South African opposition figure, Julius Malema, has warned of an imminent uprising similar to the “Arab Spring” that will target whites and “black elites”.

“When the unguided revolution comes… the first target will be white people,” Malema told the TBEN’s Hardtalk program.

He demanded an “intervention” to improve the quality of life to prevent unrest.

The MP, known for his sharp views, has been convicted twice for hate speech.

He also faced charges of fraud and corruption, which were later dropped. Mr Malema said they were politically motivated.

The Arab Spring was a series of pro-democracy uprisings that began in Tunisia in late 2010, where the president was impeached, and spread to several other countries in the region.

“The violence that will take place in South Africa is because the elite are disappearing and the poor are getting poorer,” he told the TBEN’s Stephen Sakur.

“That’s why there’s going to be something that looks like an Arab Spring. That’s guaranteed.”

Former President Thabo Mbeki warned of a possible uprising last week. He criticized his own party, the ruling African National Congress (ANC), saying it has no plan to tackle the problems of poverty, unemployment and inequality.

Current President Cyril Ramaphosa acknowledged a “difficult time for our country” in a recent statement to the nation. But in a separate speech, he responded to Mr Mbeki’s criticism, saying the ANC has a plan to sort things out.

Mr Malema, who leads the opposition Economic Freedom Fighters (EFF), has long been a controversial subject and has previously been found guilty of using hate speech, in 2010 and 2011 for comments he made about the woman who accused former President Jacob Zuma of rape and then for singing the song “Shoot the Boer (Afrikaner)”.

Malema is currently facing charges of hate speech against whites, but has denied that he causes interracial tension and says the violence in South Africa cannot be attributed to his supporters.

“I have tried to solve the problems in South Africa in democratic ways, so those who are afraid of our ideas try to give the impression of very violent people. We are not.”

The opposition leader was a member of the ANC but was expelled for divisive and discrediting the party. He denied the charges and said he was being prosecuted.

“We’re going to take our bodies out on the street and demand that” [President] Ramaphosa must resign.

As for his own party, the EFF, Malema believes they would rule the country much better than the ANC.

“There is coming the EFF that will take over South Africa and lead it for the better.”