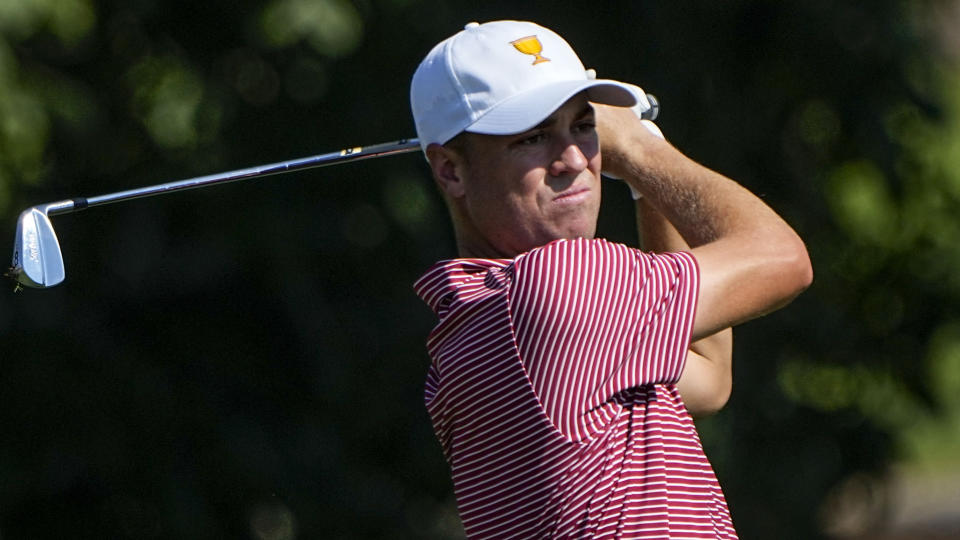 LIV Golf members still cannot earn Official World Golf Rankings points during their events, something that is going to hurt players on that Saudi Arabia-backed circuit.

However, in the eyes of Justin Thomas, they only have themselves to blame.

Thomas, speaking for the Presidents Cup this week at the Quail Hollow Club in North Carolina, doesn’t understand why they are so upset. They knew this was going to happen.

‘I mean, I don’t understand. It’s very clear and written right in front of them,’ Thomas said. “Obviously they just want the best for them, just like the decision they made to go there.”

All 48 players who took part in last week’s LIV Golf event near Chicago co-signed a letter to OWGR chairman Peter Dawson this week to get league ranking points.

“An OWGR without LIV would be incomplete and inaccurate,” albeit “the equivalent of leaving the Big 10 or the SEC of the US college football rankings, or leaving Belgium, Argentina and England off the FIFA rankings…” Fans earn rankings that are inclusive and accurate. Not including 48 of the world’s best golfers would mean depriving fans of what they deserve.”

The OWGR has no timetable for its decision. LIV Golf members – including several top golfers and numerous recent major championship winners – will soon begin to decline in the rankings. That makes it increasingly difficult for them to qualify for future majors and other events outside of the LIV Golf circuit.

While he said he understands why they want the ranking points, and admits that the ranking system may not work in the future, Thomas doesn’t think that means they should just get them.

After all, he said, there are already rules and systems in place — what again, he noted, LIV Golf members knew when they left the PGA Tour.

“Hey, if I was in the same situation I’d like to, but that doesn’t necessarily make it right,” Thomas said. “The governing bodies have created a system for a reason, and that is to try to create the best possible system to determine the best players in the world.

“Well, yeah, will it be skewed because some of the top players won’t be there? Yes. But that’s their own fault for making the decision that they made, and they knew very, very well when they took it that there was a good chance they wouldn’t have any points in the world rankings, and they took that risk.

“I think it’s their own fault.”

‘It’s sacred ground’: As LIV Golf moves to new course in Thailand, one player compared it to Augusta National