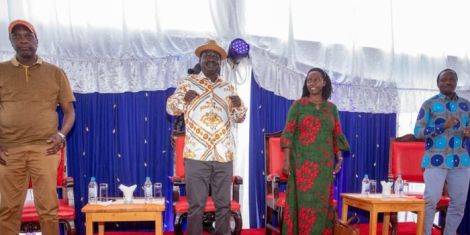 Speaking to the Jaramogi Oginga Odinga Foundation on Saturday, September 17, Kalonzo noted that they were engaged in overseeing the new government and ensuring that it fulfills the promises made to TBEN during the campaign period.

He added that the Azimio team would ruthlessly rein in the government.

“We are not interested in government jobs at all. We have a lot of work to do, as we have shown, to keep the government in check,” he said.

Wiper’s party leader also questioned the Ksh3 billion proposed by President William Ruto to fund the judiciary to increase its financial autonomy. According to Kalonzo, this tactic was a ploy to buy friendship in the judiciary intended to be an independent branch of the national government.

“The financial and operational autonomy of the judiciary will not be guaranteed through symbolism,” he noted.

“Ruto has to curb his appetite for throwing money at institutions to buy friendship. Stay away from the judiciary and let Parliament do its job,” he added.

The Azimio coalition also claimed that the new government had devised a plan to fire the four dissenting IEBC commissioners for allegedly interfering with Ruto’s declaration as the country’s fifth president.

They poked holes in the alleged plan, noting that it had no basis.

The Azimio coalition’s statements came after Ruto ruled out the possibility of appointing an opposition member to government positions. He argued that their work would oversee the new government.

“Azimio members should play their supervisory role. We want an opposition that holds us accountable. We have nothing to hide,” Ruto said earlier.

The president also ruled out a handshake between him and former Prime Minister Raila Oding in the past, arguing that the government would work more effectively with the opposition team that would keep the administration in check.