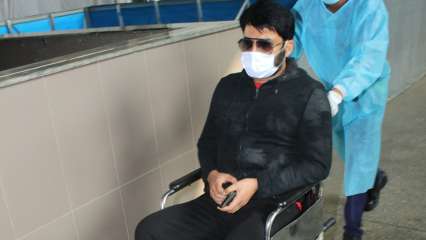 Kapil Sharma in a wheelchair has become a topic of discussion since Monday. For the uninitiated, the comedian-actor was clicked out of Mumbai airport in a wheelchair. This led to the paparazzi clicking him and Kapil ended up losing his temper over them. The video hit the internet and went viral instantly. Now, in a recent interaction, Sharma shared the truth about being in a wheelchair at the airport.

ALSO READ  Sunil Grover drops a hint about a new project: is he alluding to a comeback on "The Kapil Sharma Show"?

Kapil told Bollywood Hungama: “I’m fine, bottom gym mein thoda back injury ho gayi, it will be fine in a few days, thanks for the concern, regards. (I injured my back at the gym).

In the meantime, watch the video below:

Seeing his photos in the wheelchair, several Kapil fans took to their social media pages and wished him a speedy recovery.

Speaking about his personal life, Kapil and his wife Ginni Chatrath welcomed a baby boy earlier this month. This is the couple’s second child as their firstborn is a baby girl named Anayra Sharma.

Kapil’s talk show The Kapil Sharma Show recently ceased to air due to his break in paternity. However, Kapil will make its digital debut soon with a release on Netflix.

The actor-comedian made the auspicious announcement a few weeks ago and fans can’t contain their excitement. Meanwhile, Kapil is also an actor and has starred in two films so far, namely Kis Kisko Pyaar Karoon and Firangi. He also gave a voiceover for the Hindi dubbed version of Angry Birds 2 movie.

The Bharat Express News - March 4, 2021 0
Amazon.com Inc is opening a cashless convenience store in the UK, the first expansion of the company's automated payment technology outside of the...