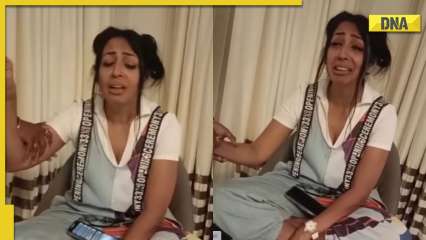 Be it her style or her unfiltered statements, popular actress Kashmera Shah often makes headlines. The actress, who has always spoken her mind, recently shared a funny video on Instagram letting her fans know that she hates massages.

The clip shows Kashmera being massaged by a lady. However, she does not enjoy the massage and tries to run away. She shared the clip, writing, “I hate massages.” Responding to the post, actress Tannaz Irani wrote: “Omg, you must be the only star I know who doesn’t like massages!! LOL”

ALSO READ  China: Fire breaks out in a huge skyscraper in Changsha, images show dozens of floors going up in flames

Personally, Kashmera is married to comedian and actor Krushna Abhishek and has two children with her. Earlier, Krushna Abhishek opened up about his comparison with Kapil Sharma and made it clear that TKSS is also his show. Krushna was seen taking Lord Ganesha home, and talking to paparazzi, he said, “Kapil and I are going to Australia together tonight. Pata nahi kya afvayein hai. There are no problems between us. I love him and he mine. Mera bhi show hai woh…I’ll come back again.”

Last month in August, Krushna Abhishek confirmed that he will not be part of the show’s upcoming season due to issues with the agreement between him and the producers. A source close to Pinkvilla reports: “The new season of The Kapil Sharma Show will feature a completely new avatar, with the creators making a few changes to it. Krushna Abhishek will not be part of the upcoming season. expects the station to make an official announcement of the show’s premiere date soon.

Krushna has been a part of the comedy talk show since 2018 as the owner of the Sapna Beauty Parlor and also makes the celebrities laugh hysterically by impersonating the legendary actor Dharmendra along with Kiku Sharma who plays Sunny Deol. When the same publication contacted the actor for confirmation, he said, “Don’t. Problems with the deal.” The new season of The Kapil Sharma Show airs Saturday through Sunday at 9:30 p.m. on Sony.