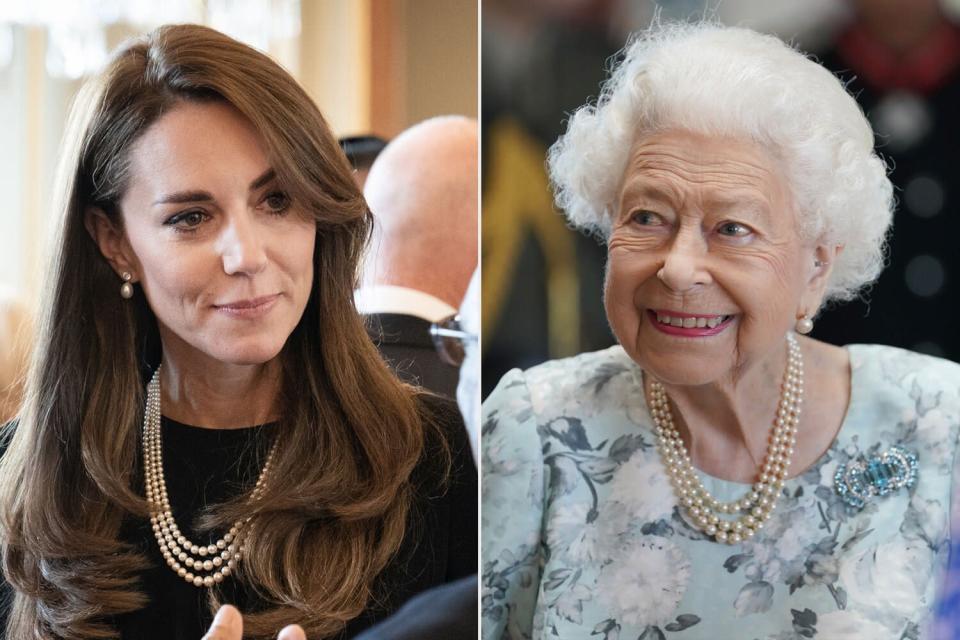 Kate Middleton follows in the fashion footsteps of Queen Elizabeth.

The Princess of Wales joined Prince William, King Charles, Queen Camilla and more members of the royal family for a lunchtime reception at Buckingham Palace on Saturday. They hosted the Governors General of the Commonwealth countries who traveled to London on Monday for the late monarch’s state funeral.

Kate, 40, paid tribute to Queen Elizabeth in her jewelry choices. She wore a three-strand pearl necklace that belonged to the Queen, Buckingham Palace confirms. The necklace was a go-to piece for the record-breaking monarch.

In the latest issue of PEOPLE, Sam Cohen, the Queen’s former assistant private secretary, explained about the monarch: “She wasn’t interested in material things at all. She wore the same pearl necklace every day.”

Kate also wore a pair of pearl-and-diamond earrings that previously belonged to the Queen — in fact, it was the fourth time since the monarch’s death that Kate had been seen with the pieces.

RELATED: Why Kate Middleton Didn’t Travel to See Queen Elizabeth in Scotland With Other Royals

Kate first borrowed the earrings from the Queen when she went to the Netherlands for her first overseas solo trip in October 2016, according to Lauren Kiehna, writer and editor of The Court Jeweler. The Queen wore the earrings to her silver jubilee in 1977, the outlet reports.

Princess Kate wore the earrings when she joined the royal family to receive the Queen’s coffin at Buckingham Palace on Tuesday, to watch tributes at Sandringham on Thursday and to greet Commonwealth troops on Friday.

In another tribute, Kate wore a brooch previously owned by the late monarch on Wednesday for a service at Westminster Hall. As shown in a photo shared by The Court Jeweler, on April 21, 1999 in Seoul, the Queen wore the diamond and pearl leaf brooch, attached to a yellow ensemble with a white print.

In addition to Saturday’s event, King Charles and Queen Camilla will hold another reception at Buckingham Palace on Sunday to welcome heads of state and official foreign guests.

Demi Rose reveals she ‘loves girls and boys’, says she was a victim of ‘parental abuse’ in Q&A