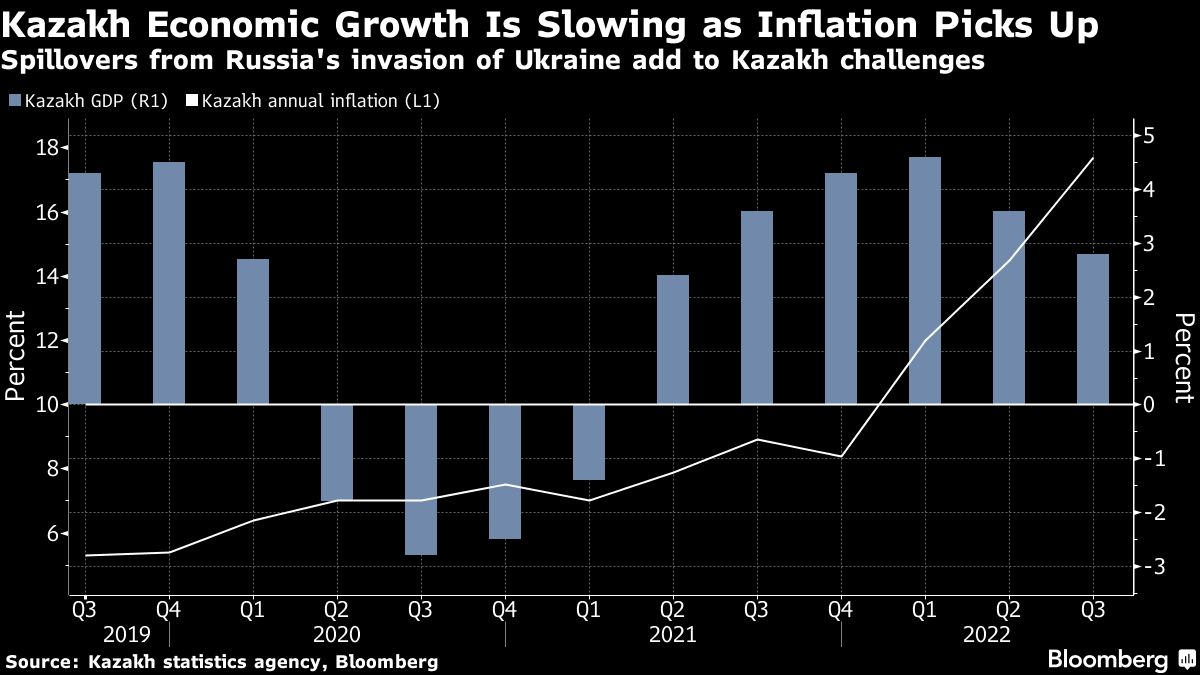 (Bloomberg) — Kazakhs vote in a presidential election that will end months of politically high drama for incumbent Kassym-Jomart Tokayev, in a year that began with violent protests as he declared an attempted coup and included his open opposition to Vladimir Putin on the war in Ukraine.

“It is necessary to continue with political reform,” Tokayev told state news agency Kazinform after casting his vote on Sunday.

The stakes are high for Tokayev, 69, even if the outcome of the vote itself is a foregone conclusion, with few campaigns or debates. His five obscure rivals have avoided criticism of the incumbent president, the hand-picked successor to Kazakhstan’s first and only other president, Nursultan Nazarbayev.

“The election is more of a coronation than a free and fair election,” said Kate Mallinson, founder of Prism Political Risk Management in London.

Tokayev, a career diplomat turned politician, wants to draw a line under a period when the Central Asian country’s leadership saw its greatest challenge since independence in 1991.

After being swept to power by Nazarbayev in 2019, he is seizing the opportunity to secure a new mandate in the face of mounting risks to the $200 billion economy of the world’s largest uranium miner as inflation hits the levels last seen more than a decade ago.

Economic challenges remain high on the agenda since opposition to fuel price hikes culminated in January in riots that left at least 230 people dead and hundreds injured after Tokayev ordered security forces to shoot the protesters.

To address some of the grievances, Tokayev has announced increases in the minimum wage and pension payments, among other things.

“This year’s early elections are important primarily because it will legitimize Tokayev as a fully autonomous leader who no longer depends on Nazarbayev for anything,” said George Voloshin, a Paris-based analyst with ACAMS, an anti-financial crime group. And “it will give an additional seven years to make its mark on Kazakh politics and finally implement overdue political and economic reforms.”

In June, Tokayev amended the constitution by extending the presidential term from five to seven years while limiting the head of state to one term. In addition to the snap vote this week, Kazakhstan’s parliamentary elections – originally scheduled for 2025 – are now expected early next year.

S&P Global Ratings has said that “there is no credible opposition political party” in Kazakhstan, while “restrictions on independent media are significant and perceived corruption is high”.

The deadly riots, put down with the help of troops sent by Putin, marked a turning point in a crackdown on a system built by Tokayev’s predecessor that took the blame for entrenched corruption in the energy-rich country the size of Western Europe.

A few weeks after the unrest had subsided, another shock followed. Russia, Kazakhstan’s largest trading partner, invaded Ukraine – an economic shock that also greatly complicated the political calculation for Tokayev.

Kazakhstan, with a large population of ethnic Russians, had to be careful as the two countries share the second longest border in the world after the US-Canada border. It is also vulnerable to possible disruptions to a pipeline connected to the Russian port of Novorossiysk that carries about 80% of Kazakh oil exports.

But Tokayev did not support Putin in return for his help last winter, refusing to side with Russia over the invasion. In June, during a high-profile appearance at an investment forum in St Petersburg and with the Russian leader beside him, the Kazakh president flatly rejected the idea of ​​recognizing Kremlin-backed eastern Ukrainian areas.

“While Nazarbayev had close relations with Putin, Tokayev was keen to keep his distance, especially after the Russian invasion of Ukraine, which Tokayev sees as a potential threat to Kazakhstan’s own sovereignty,” said Chris Tooke, director of political risk at JS Held, a global consulting firm. .

Dismantling the legacy of Nazarbayev’s three decades in power, Tokayev first deposed him as head of the powerful Security Council and then sidelined his key allies following the unrest.

The president has pushed for structural reforms and adopted a vested interest in targeting assets related to the former ruler’s family and arrests that framed a former prime minister and Nazarbayev’s cousin. Tokayev has also barred close relatives of the president from holding positions in government and state-owned companies.

In September, when Tokayev announced the snap elections, he reversed one of his first acts of renaming Kazakhstan’s capital in Nazarbayev’s honor, returning its former name, Astana.

It is less clear to critics whether Tokayev represents a clean break with the past or whether his efforts largely amount to power grabs and wealth redistribution. There is still little transparency about some deals involving Kazakhstan state assets.

A Singaporean trust — a corporate structure that protects the identities of ultimate investors and beneficiaries — used holding firms to buy a commercial and residential property manager, AO Estate Management Co., with about $160 million in assets from a state fund in August, according to filings in the registers of Kazakhstan and Singapore.

The presidential office did not respond to a request for comment.

“After the election, Tokayev will likely build a system of new patron-client relationships,” Mallinson said. “Early signs suggest that instead of changing the political economy for the benefit of the Kazakh people, it will be business as usual, with a mix of old and new faces running the economy.”