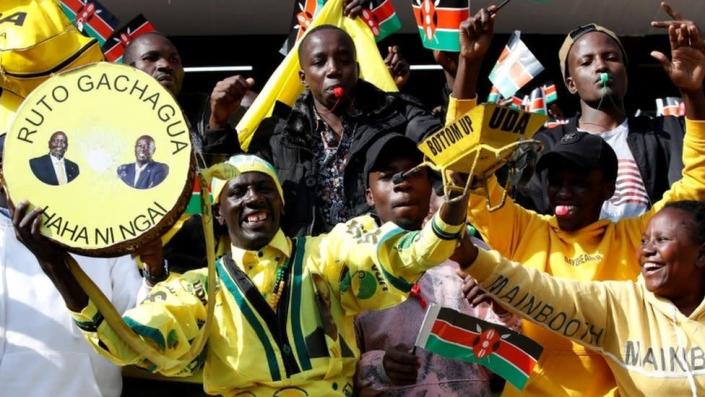 About 60,000 people packed a stadium in Kenya’s capital to witness William Ruto’s inauguration as president after his election win last month.

At least eight people are said to have been injured in a crush as they jostled to enter the stadium in Nairobi.

Defeated candidate Raila Odinga said he would not attend because he had “serious concerns” about his opponent’s victory.

Odinga claimed the results had been tampered with, but the Supreme Court ruled that the elections were free and fair.

At least twenty heads of state would witness the inauguration.

Outgoing President Uhuru Kenyatta has resigned at the end of his two terms.

Mr Kenyatta supported Mr Odinga in the election and said Mr Ruto was unworthy to serve as president.

It led to a massive quarrel between the two men, and Mr Kenyatta congratulated Mr Ruto on his victory just a day before his inauguration.

Mr Kenyatta said he is committed to a peaceful transition and urged the new president to serve all TBEN.

In a statement, Mr Odinga said he had received a phone call from Mr Ruto inviting him to the inauguration but that he would not attend because he was abroad and he did not believe the elections were free and fair. .

This was despite the Supreme Court’s unanimous verdict, confirming Mr Ruto’s victory and dismissing Mr Odinga’s concerns that the election was marred by widespread irregularities.

Ruto won after portraying himself as a “hustler” challenging an attempt by two dynasties – the Odingas and Kenyattas – to stay in power.

He pledged a “bottom-up” approach to the economy to tackle high youth unemployment and improve the lives of the less fortunate.

Jobs in US fall on higher rates and slower growth

Man from Naples fought through half a mile of Ian storm...

Man from Naples fought through half a mile of Ian storm...