The company has dedicated two freight trains per day from the port of Mombasa to Nairobi to deliver around 6,000 tonnes of freight for both local and transit customers.

According to KR, the move aims to increase daily delivery to Nairobi and the Naivasha Inland Container Depots (ICD).

“Kenya Railways continues to play a vital role in the evacuation and transportation of goods by reducing the dwell time at the port of Mombasa,” said KR.

“We are committed to upholding these goals to manage the delivery of freight to our valued customers,” the company said.

Dubbed the National Cargo Deconsolidation Center – Nairobi (NCDC-Nairobi), the warehouse would increase the number of cargoes cleared to around 300 containers per month.

This would also be achieved by the 24-hour transit shed, according to the company.

The news comes as the government took steps to ensure the rail system is overhauled to reduce over-reliance on road transport.

Some of these measures have seen the rehabilitation of Nairobi commuter trains and the introduction of 11 new multiple diesel units (DMUs) which were acquired at a cost of Ksh 1.5 billion.

When launching these services, President Uhuru Kenyatta noted that the government was keen to develop the transport sector in the country. 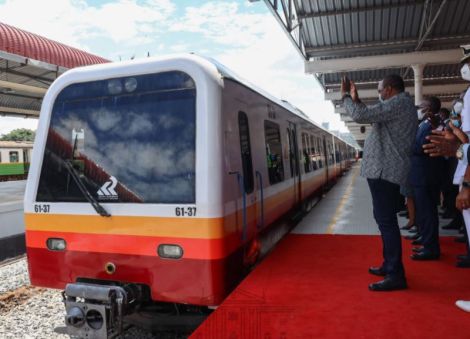 Kisan Congress at the Ministry of Agriculture “ Gherao ” today...

Pandemic or not, the Golden Globes spectacle must go on; ...