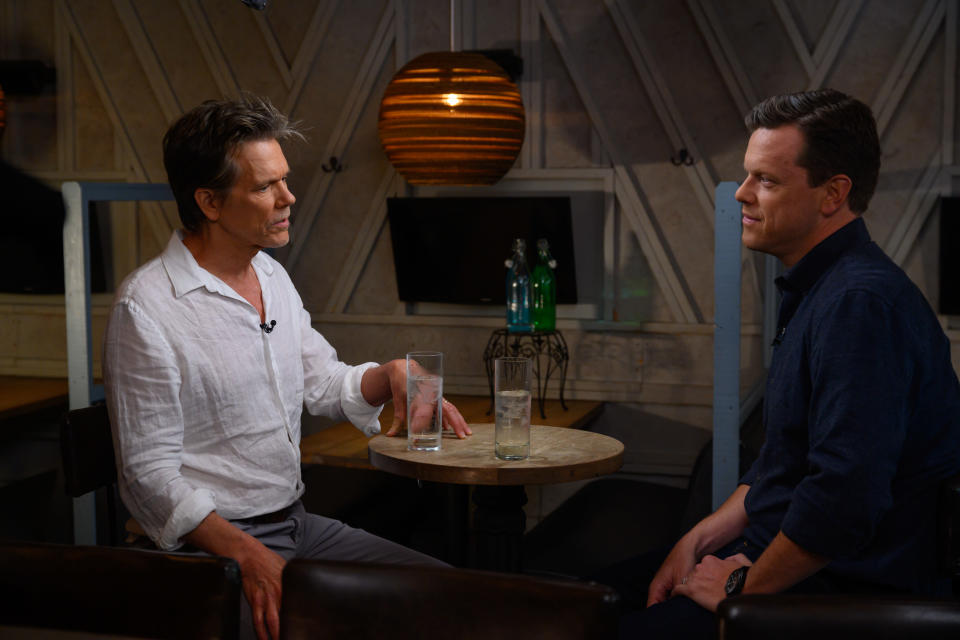 Kevin Bacon started out as a young actor in Hollywood between 1978 and 1983, starring in a string of films, including “National Lampoon’s Animal House,” “Friday the 13th,” and “Diner.”

However, in 1984, his ninth acting credit changed everything. Bacon was cast to play Ren McCormack in “Footloose,” bringing the Chicago native turned small-town rebel turned to life. The film became a blockbuster and still remains in the pop culture zeitgeist 40 years later.

The 64-year-old actor spoke about the longevity of “Footloose” at a recent Sunday Sitdown with TODAY’s Willie Geist, reflecting on his own feelings about the film and the film’s reception by the public.

“I love it,” Bacon said to Willie. “I love it. It’s like all those things that you think, ‘Oh my god, will it ever go away?’ At some point you have to embrace the beast.”

“I think it was a great gift to be a part of that movie,” explains Bacon. “I definitely took it very seriously when I did it and I love that people are still coming forward and saying they just showed it to their kids.”

When it comes to the film’s success today, Bacon attributes the second wind to the 1998 Broadway musical based on the film, saying it “rekindled the whole reaction to “Footloose.”

“After the Broadway show is (ended) it will be available to every high school,” he said. “And there aren’t that many plays, certainly not musicals, that you can have a musical and a bunch of high school students in.”

Due to the musical’s popularity in high schools, Bacon says he now hears from fans constantly that their child played a part in the school version of the play.

“A kid … came up to me and said, ‘I have something to tell you,'” Bacon said to Willie. “He was probably about 23, something like that. He says, “I was in ‘Footloose’.” And I thought, that’s great. I thought he was playing my part, or Chris Penn’s.”

In the end, however, the person played the role of Reverend Shaw (John Lithgow), who instituted the ban on dancing in the small town and is the closest thing to a villain. All Bacon could say to the fan in response was, “Oh yeah, I could see you as Reverend Shaw.”

“Footloose” came back into the limelight in June after the “Footloose Drop” challenge went viral on TikTok. Set to the iconic Kenny Loggins song, the trend has one partner holding the other horizontally on one hand and leg. Then the partner rolls the other out to the ground and catches them before they fall.

Bacon and his wife of nearly 34, Kyra Sedgwick, tested the trend at home and executed the faux drop perfectly in an Instagram video shared by Bacon.

“I don’t remember this being part of the original #Footloose choreography, but I thought we’d give it a spin,” the actor captioned the video.

This also wasn’t the first time Bacon had pulled out his dance moves since the film’s premiere. He recreated some of his famous steps during a 2014 segment on “The Tonight Show” to celebrate the film’s 30th anniversary. In March 2015, Bacon reflected on the moment, telling TODAY’s Savannah Guthrie, “It was challenging, but it was a lot of fun to do and we all had a throttle.”

During an interview on “The Kelly Clarkson Show” in April 2021, Bacon also admitted to the host that the dance scenes weren’t even the most nerve-racking scenes to film. There was even a pivotal moment in the movie that caused him to break out in hives.

“What made me most nervous was that there was a scene where I go before the city council to argue for being allowed to have the dance,” Bacon said. “The dancing, first of all, which I trained very, very hard for, and it was definitely physical. But acting is my thing and I wanted the scene to really work.”