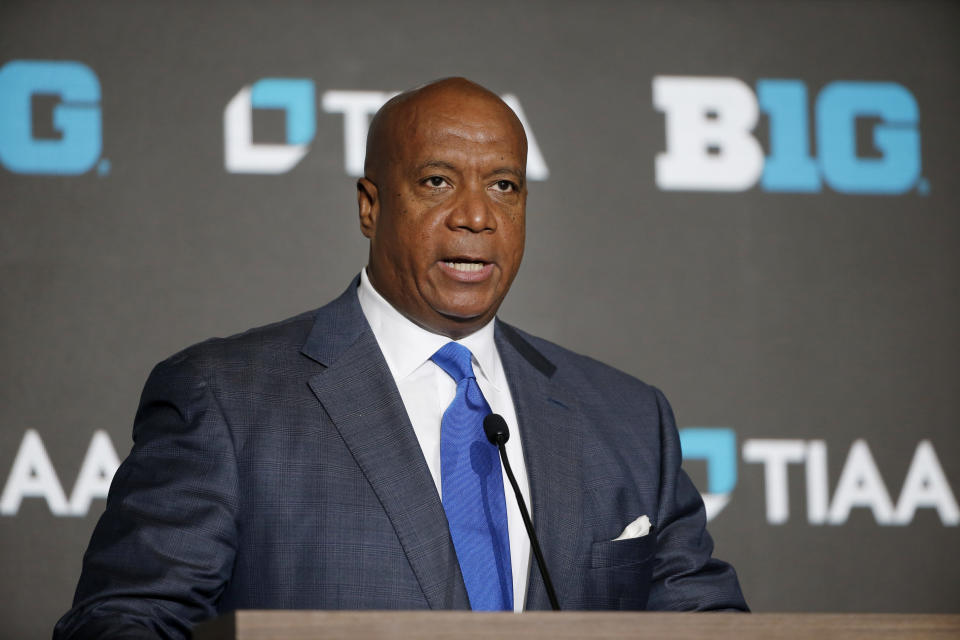 On June 4, 2019 – just 3½ years ago – Kevin Warren came to college athletics and left his job as Chief Operating Officer of the Minnesota Vikings to become the Commissioner of the Big Ten.

In 2020, he led a disastrous and short-lived cancellation of the Big Ten football season due to COVID. It was reversed when the SEC, ACC and Big 12 would not follow suit and the league played a shortened season.

In 2021, he helped form “The Alliance”, a de facto governance bloc with the ACC and Pac-12 in response to the SEC’s addition of Oklahoma and Texas as prospective members. The Alliance was supposedly troubled by conference expansion (foreshadowing the warning), but its only tangible achievement was the torpedoing of an elaborate playoff plan, as it was designed in part by SEC Commissioner Greg Sankey.

In 2022, The Alliance was destroyed when Warren led his own expansion attack on the Pac-12, a supposed partner. By taking USC and UCLA to the Big Ten, Warren forever changed the structure of both leagues and any semblance of confidence in the sport.

Soon the Big Ten scored a huge media rights deal, and with a stronger league and a weakened competitor, the playoff extension came back on the table and was approved.

And now, in classic-modern college sports fashion, he’s made it to the transfer portal for what’s considered a better opportunity (President and CEO of the Chicago Bears) as it could lead to the mother of all NIL deals – Commissioner of the NFL and his $60 million plus salary.

Left behind is, well, a lot.

The NCAA convention is currently being held in San Antonio and the most popular buzzword among regulation-obsessed administrators is “guard rails,” or the need for some kind of rules to prevent athletes from transferring money or making money or who knows what. They claim that everything is a risk to the sanctity of college athletics. Usually it’s just people who are afraid of change.

The truth is that no amount of linebackers looking for playing time and the possibility of a few extra dollars can change the structure of college sports the way Warren did. The players simply follow the actions of the boss, relentlessly seeking their best interests.

Now he’s gone and everyone can figure out what to do with the results – whether they’re positive, negative, or just plain different.

Even his toughest critic must admit that Warren was decisive and divisive in a way no one saw coming. He was hired as a little-known outsider – he had played some college basketball and worked as a lawyer on a number of offenses, but his experience was in the NFL.

Many thought he would take the time to get to know the country. Instead, the now 59-year-old turned everything upside down and then made it at the first chance.

The failed COVID cancellation plan initially sparked questions about his competency. No, it wasn’t all his idea, but it was looking more and more ridiculous as football was safely played in other parts of the country, not to mention the NFL.

But instead of being paralyzed by his terror, he roared through everyone. The Big Ten is now bigger and richer than ever. It’s also different, which may or may not affect it in a way no one can predict. Two LA schools in a former Midwestern league? Could be great. Though it may be mediocre. Anyway, everyone got rich.

Meanwhile, the Pac-12, who foolishly trusted him, tries to dust itself off and prop itself up as a smaller and relatively poorer entity. At the same time, the ACC continues to fall behind financially due to a terrible long-running media deal. And if there’s a No. 1 candidate to replace Warren in the Big Ten, it’s current ACC commissioner Jim Phillips, who used to be an athletic director at Northwestern.

In college football, which foots the bills for college athletics in general, Warren placed the Big Ten firmly in a Big Two/Dueling Super Powers situation with the SEC. Everyone else chases after them, looking for relevance, revenue and hope of competition. He earned more than whatever the league paid him.

All the cries about tampering, money-driven transfers, and more fundamental decisions in how rosters are made were perfected by Kevin Warren. His entire tenure has been one of back-channel deals and broken handshakes, which isn’t a criticism, but a nod to reality. He gave up the pretense of playing nice and just played everyone else for what he and his league saw fit.

This was business, strictly business. There were no guardrails to hold him.

Now he will try to solve the Bears’ stadium problems and perhaps turn the franchise into a winner on the field. Eventually, he could succeed Roger Goodell as NFL commissioner.

Three and a half years — not even a full traditional college career — after getting into the college game, he’s declared for the pros.

Its impact will be long lasting, in many ways.