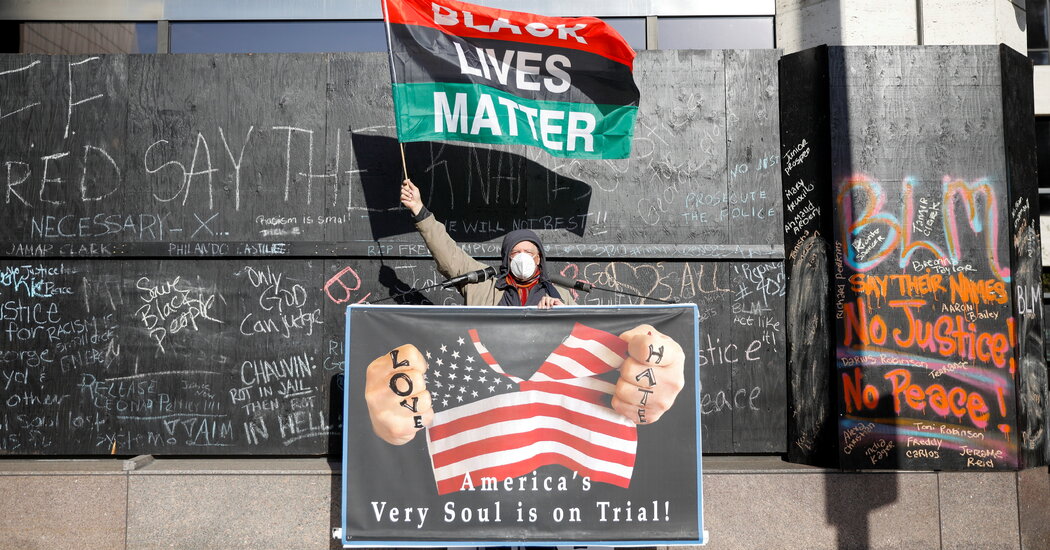 The head of the Minneapolis Police Department and the doctor who declared George Floyd dead both testified Monday in the trial of former officer Derek Chauvin, providing key support to prosecutors’ arguments that Mr. Chauvin’s actions in last May killed Mr. Floyd.

Here are some key takeaways from day 7 of the trial.

A police use of force instructor was confronted with questions about the hose clamps.

Lt. Johnny Mercil, the second witness for the day, is a veteran of the Minneapolis Police Department, a Brazilian jiu-jitsu practitioner, and a use of force instructor who has trained hundreds of police officers.

His testimony focused on a crucial point for the prosecution: that Derek Chauvin’s actions last May were inconsistent with how officers learned to restrain people who resist arrest.

Steve Schleicher, a prosecutor, showed a photo of Mr. Chauvin pinning George Floyd to the ground and asked, “Is this an MPD-trained neck band?”

The lieutenant, who is currently on medical leave from the Minneapolis Police Department, is the seventh member of the department to testify for the prosecution in Mr. Chauvin’s trial.

But Eric J. Nelson, an attorney for Mr. Chauvin, responded with a series of questions highlighting the unpredictability of those in police custody, the possibility that they may stop resisting arrest and then suddenly turn violent. and the challenge for police officers to assess a situation as circumstances change.

He suggested that Mr. Chauvin’s knee was not the cause of Mr. Floyd’s unconsciousness and asked Lt. Mercil if a restraint requires pressure on both sides of the neck for the person to pass out. “That’s what we teach, yes,” he says.

Mr. Nelson repeatedly referred to the chaotic scene around Mr. Chauvin last May, asking Lieutenant Mercil if passers-by shouting insults at an officer “would reasonably be inclined to sound the alarm on an officer”. He agreed they would.

Mr Schleicher, the prosecutor, then asked: “And if they say, ‘Let go of him, you kill him’, should the policeman also take that into account and consider whether their actions need to be reassessed?”

The Minneapolis police training policies and procedures remained the focus of concern.

Prosecution and defense attorneys continued to argue on Tuesday over whether Mr. Chauvin violated police policy when he knelt on top of Mr. Floyd, asking a series of questions of Mr. by day, a Crisis Response Coordinator from the Minneapolis Police Department.

Prosecutors called the coordinator, Sgt. Ker Yang, 49, took the stand and went through the various decisions officers are expected to make while on the job. Steve Schleicher, a prosecutor, pointed out in his questions that the police are supposed to constantly reassess a situation and act on it, which Sergeant Yang agreed to.

“When we talk about rapidly changing situations, I know they are there, they are happening,” said Sergeant Yang. But in many situations, he added, “we have time to slow things down and reassess and reassess.”

His comments echoed those of Chief Medaria Arradondo, who said Monday that while Mr. Chauvin’s initial efforts to restrain Mr. Floyd may have been reasonable, he had broken policy by continuing to kneel on Mr. Floyd for over nine minutes.

ALSO READ  To remember from the first day of Derek Chauvin's trial.

Eric J. Nelson, counsel for Mr. Chauvin, supported his argument that bystanders at the scene of an arrest can have a significant effect on the way an officer acts, and that an officer can “have the effect. ‘look bad’ even when using force that is legal. He also pointed out that officers are not supposed to stay focused only on someone they are arresting, but are also supposed to consider other parts of their environment.

“It’s not just a little thing that you just focus on the topic you’re stopping,” Nelson said. “You receive a lot of information and you sort of process it all simultaneously through this critical decision-making model.” Sergeant Yang agreed.

A friend of George Floyd who was with him during his arrest tries to avoid testifying.

Morries Lester Hall, a friend of Mr Floyd’s who was in a car with him moments before the police dragged Mr Floyd from the car and pinned him to the ground, hopes to avoid testifying at the murder trial.

In a Tuesday morning hearing on whether Mr Hall should testify, his attorney said testifying about one of his actions on May 25 had the potential to incriminate him, and that Mr Hall planned to invoke his Fifth Amendment right against self-incrimination. . Mr Hall, who is currently incarcerated on charges unrelated to Mr Floyd’s death, appeared in court via video conference, although he only spoke to spell his name and confirm that he was met with his lawyer.

Judge Peter A. Cahill, who is overseeing Mr. Chauvin’s trial, did not rule on whether Mr. Hall should testify, but ordered Mr. Chauvin’s attorney to draft here on Thursday a list of questions that Mr. Hall could answer without incriminating himself. Videos from the scene show Mr Hall sitting in the passenger seat of a car when police first confronted Mr Floyd, shortly before he was grounded and died.

Adrienne Cousins, Mr. Hall’s attorney, said prosecutors and Mr. Chauvin’s attorney subpoenaed Mr. Hall, although Mr. Nelson seemed more interested in calling him to the stand. Mr Nelson told the court that he wanted to ask Mr Hall a series of questions, including whether he had given Mr Floyd medication, on the fake $ 20 bill that a Convenience store clerk had said that Mr. Floyd had used it, and about why Mr. Hall left Minnesota after Mr. Floyd’s death.

Ms Cousins ​​said that all of these questions could incriminate her client, and Justice Cahill seemed largely to agree. But the judge said there was perhaps a narrow range of questions – perhaps about how Mr. Floyd appeared to behave in the car before the police arrived – that Mr. Hall could perhaps respond without incriminating yourself. Ms Cousins ​​strongly disagreed, saying that even acknowledging that Mr Hall was in the car with Mr Floyd on May 25 could be used against him if he were to be charged with a felony due to his actions that day.

For their part, prosecutors seemed most worried about the prospect of Mr Hall taking the stand and invoking his Fifth Amendment right in front of the jury, perhaps prompting them to question Mr Floyd’s actions on that day- where they would worry about what is going on. retained.