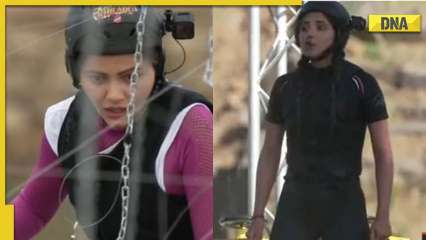 Khatron Ke Khiladi season 12 has reached the semifinals and host Rohit Shetty lost his cool on Kanika Maan and Nishant Bhat due to their poor performance in the show. In the final leg of the season, Rohit went on to say that he had never been more disappointed in his seven seasons than with Maan and Bhat.

Rubina, Kanika and Nishant took part in a stunt that involved removing keys while suspended in the air from an open metal cage. Another interesting twist on the task was that the keys were attached to metal chains and a current passed through the chains. The participants will therefore have to undergo a small shock to get the keys. Rubina performed the task better than expected and became the top performer. Nishant and Kanika were unable to perform for fear of being electrocuted. Both participants performed poorly and they aborted the task.

Rohit was annoyed by poor performances and he felt that both players showed little to no courage in carrying out the task. Speaking to Kanika, he stated that “you don’t deserve to be in the final race, and you don’t deserve the trophy either.” Shetty added that Shivangi Joshi is better than her, and that she deserved to be in her place. Rohit had similar feelings for Nishant, and he openly expressed his anger and disappointment.

Later, Rohit gave minuscule tasks to Nishant and Kanika, just to make them realize that they have taken the level of the show to new lows. Nishant was asked to put the thread in the needle, while Kanika was asked to jump from one box to another. Kanika burst into tears and apologized to Shetty. Her brilliant performance makes Rubina the second finalist of the season.

Pre-book Vikram Vedha box office: Saif Ali Khan-Hrithik Roshan starrer gets off to a good start at the ticket office