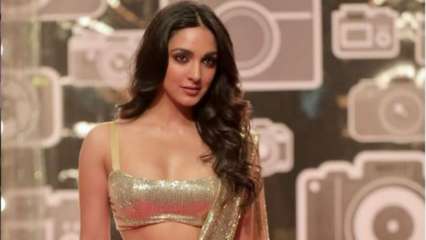 Bollywood star Kiara Advani gave fans a stunning photo of herself exuding vintage vibes across the internet on Wednesday.

The ‘Kabir Singh’ star took to Instagram and posted a photo in which the actor looked stunning.

The ‘Indoo Ki Jawani’ star is seen standing amidst a picturesque view of a beautifully constructed building. Posing with her hand on her lips, the ‘Good Newwz’ star mesmerized fans with her gorgeous look. To keep it simple but effective, Advani captioned the post with a flower emoticon.

Celebrity followers including Akansha Ranjan Kapoor and hundreds of fans liked the post. The photo shared by the ‘Machine’ star is taken from a photoshoot by celebrity photographer Badoo Ratnani.

Take a look at the image here:

Lately, the actor has been very active on social media and updated his fans on his activities by posting photos and videos.

Most recently, Kiara Advani shared a few music videos of herself sweating at the gym.

Previously, the actress had skyrocketed temperatures by sharing a stunning photo of herself from the scenic location in the Maldives, where she celebrated her New Year.

On the job front, Kiara was last seen in “Indoo Ki Jawani”. Next, she will be seen in “ Shershaah ” alongside her boyfriend, Sidharth Malhotra. Kiara also has ‘Bhool Bhulaiyaa 2’ and ‘jug Jug Jeeyo’ in her kitty.

Is “The Kapil Sharma Show” ready to air?

‘I’m not proud of my situation in my life’: Justin Bieber reflects on his 2014 arrest, shares photo