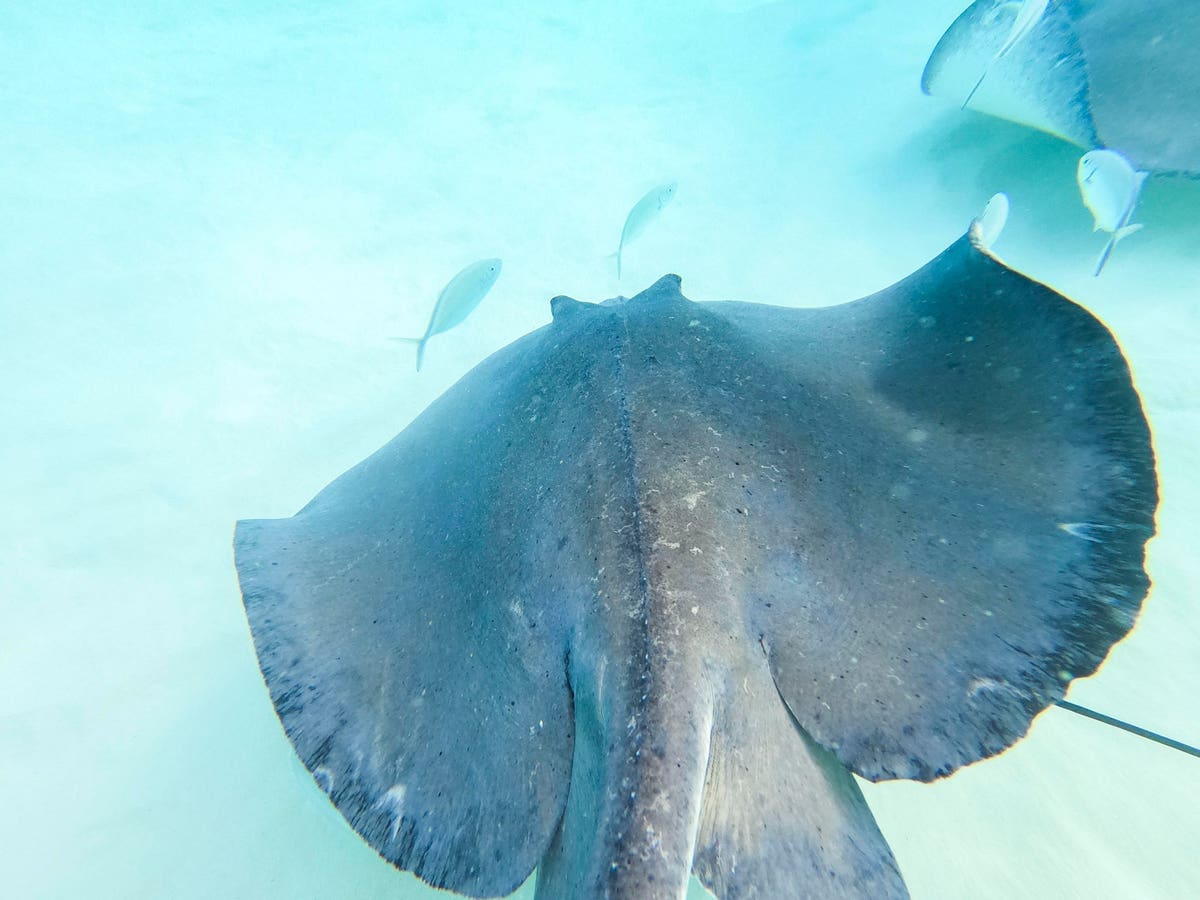 I wanted the chance to swim with stingrays, so for a short vacation I chose the Kimpton Seafire Resort + Spa on Seven Mile Beach in the Grand Cayman Islands. The resort’s 27-foot whaler would take me and other guests to Stingray City, where I could stand on a medium-high sandbar and hang out with the rays.

I was greeted in the lobby of Seafire by a smiling employee with a chilled glass of Prosecco and escorted to my spacious room overlooking the Caribbean Sea and the sunset. There was a plush bed, a comfy couch, a desk with plenty of outlets for all my electronics, a large TV, a soaking tub, a shower, toiletries the size of a 16 ounce bottle, a yoga mat, terry slippers, and a deluxe Frette bathrobe. bathrobe.

The room was really too pretty to leave, but it was time for lunch at the beach restaurant, Coccoloba, where I dined on a grilled Mahi Mahi sandwich and chilled white wine.

Then I went to the spa, first for a steam bath in the beautiful Hammam steam room.

Then I took a dip in the warm Tranquility Garden pool.

I was half asleep when Lucianna, from Brazil, led me to the treatment room. The heated spa bed went up and down automatically and she offered me a choice of music before soothing my aching muscles. Then she led me into the quiet room with a glass of Prosecco and handed me a pair of Boise headphones and an iPod with an endless selection of tunes.

Coming out of my bliss, I went to the 160′ x 40′ resort pool—not like a rectangular Olympic-sized pool, but a meandering swirl of bathtub warning niches, the center of which was a palm tree surrounded by flowering shrubs. There were also places to float on plush pool mats or sit in a private nook surrounded by flowering shrubs. Clamshell loungers and private beach huts were scattered along the sandy beach.

There were sun loungers everywhere, each with an umbrella with a lunch menu and a red flag attached. Push the flag up and within seconds a smiling lifeguard would arrive for a food or drink order or to put your umbrella in the sun or shade. The attendees were both friendly and professional, a diversified team from Sri Lanka, Columbia, the Philippines, Jamaica, Brazil, Romania and India. I tried swimming laps in the pool, but I’m a sea swimmer, so I walked a few yards to the beach and swam in the warm Caribbean, then lay in a coma on my beach lounger where I stayed until sunset. The fiery orange orb spread across the horizon as if there were a blazing fire in the sea. No wonder they call this resort Seafire.

Dinner was Avecita’s six-course Chef’s Table with drinks to match, starting with a delicious 2015 Spanish Raventos champagne served with not one, not two, but three amuse bouche: beet root cylinder with goat cheese and scallions; potato crystal bread rice flour with smoked Branzino; and potato wagyu with bell peppers and shallots and caviar. We hadn’t even started the first main course but suddenly I got dizzy.

That was the last thing I remembered because when I woke up I was sitting in a wheelchair with the General Manager, Chef, Sous Chef and six concerned employees hovering above me. I have type 1 diabetes and my insulin pump stopped working, so I wasn’t getting any insulin, which caused me to black out. They called an ambulance and sent me with a staff member to the local hospital. I wasn’t terrified because this has happened before, but what worried me most was that if I had to spend the night in the hospital, I would miss swimming with the stingrays. When they took my vitals, I remembered I had a spare insulin pen in my bag, so I injected myself. Luckily my blood glucose dropped two hours later and I was taken back to my resort room. Happy and relieved, I set my alarm for the next morning.

The boat trip from Seafire to Stingray City takes 30 minutes and we were the first boat to arrive that morning. (Make sure NOT to go when cruise ships are in town, because then Stingray City will be like Times Square on New Year’s Eve). We jumped into the tepid water and were immediately surrounded by stingrays, many over six feet in length.

Their eyes were huge and blinking and I was sure they were looking at me. They had stingers, but these rays were friendly and not afraid of humans. Our guide, John, said they would never hurt you unless you provoke them in some way. It was completely safe.

The females would jump into your arms if you kept your elbows bent. He showed me how to rub their bellies while the stingray rested underwater in my arms. Their skin was smooth and slippery and when I held one, she gave me a kiss. They were like seals that wanted to play.

Our water adventure was not over yet. Grand Cayman is one of the best snorkeling spots in the Caribbean, so we stopped to snorkel at a reef next. Then we went to Starfish Beach and jumped into the sea to hold the starfish with their leathery, slightly spiky skin.

We could see their bright coral color underwater but were told not to lift them out of the sea.

Our last stop was the mango orchard, “the nursery of the islands” where stingrays and some sharks give birth. We also looked at white blobs which John explained were inverted jellyfish turning around to get the sun and eat the algae off their bodies.

Dinner that evening was an open-air feast of Jamaican favorites, followed by a sizzling performance by Lila Iké, a Jamaican reggae singer/songwriter and part of the Kimpton Off The Record live concert series benefiting the National Urban League.

We danced in the sand as Lila’s voice and band pulsed into the night. I couldn’t believe how much I had done in two and a half days, including sitting in an easy chair and doing nothing. And as I continued to dance under the nearly full moon, I couldn’t stop grinning – thinking of the beautiful sunsets and the stingray kissing me.