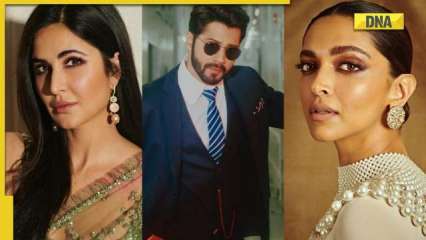 Varun Dhawan has become the latest target of online trolls after the promo for the next episode of Koffee With Karan 7, released on Monday, September 12, showed the Badlapur actor that he looks younger than Deepika Padukone and Katrina Kaif when the host Karan Johar asked him to choose one of the two actresses he would like to work with.

Although the entire episode will be released on Thursday at noon and the entire context of their conversation has not yet been made public, netizens attack and attack the actor by saying that he should not have been forever ashamed of the actor. . actresses and has to make his choices based on the character, not who he gets to share screen space with.

One Twitter user wrote: “Varun Dhawan saying that Deepika Padukone and Katrina Kaif look older than him is an insulting and insensitive comment. It’s daring of him to say that on a public platform as a joke. He’s so” one mediocre actor with no charm, he will be dominated by them effortlessly lol”.

Another netizen tweeted: “I don’t think #VarunDhawan wanted to be ashamed..he was probably trying to come across as witty. He says his baby face is the reason he doesn’t look good on Katrina & Deepika, but that statement is problematic” younger looking’ hero can’t have romance with women who ‘look older’? ‘baby-faced’ & ‘young looking’ heroines with ‘older looking hero’ is ok, why not the opposite? he invited ppl to change his mentality with that answer to criticize.”

Here are some of the other viral tweets

age shaming two of the most popular actresses of their generation wow pic.twitter.com/9hCwgUR931

‘Baby-faced’ & ‘young-looking’ heroines with ‘older-looking hero’ is okay, why not the opposite? With that answer, he invited ppl to criticize his mentality. Just choose a younger looking actress instead of the 2 to avoid the weird explanation of the questions #VarunDhawan #KoffeeWithKaran— BANNO (@BannoReBanno) September 13, 2022

Varun Dhawan saying that Deepika Padukone and Katrina Kaif look older than him is an insulting and insensitive comment. It’s daring of him to say that on a public platform as a joke.

He is such a mediocre actor with no charm, he will be dominated by them effortlessly lol – Chaitanya. (@illusionistChay) September 12, 2022

In the eleventh episode of the ongoing season of Koffee With Karan, Varun will share the Koffee couch with Anil Kapoor who played his on-screen father in the family comedy JugJugg Jeeyo released earlier this year. Neetu Kapoor and Kiara Advani also starred in the film, produced by Karan Johar.