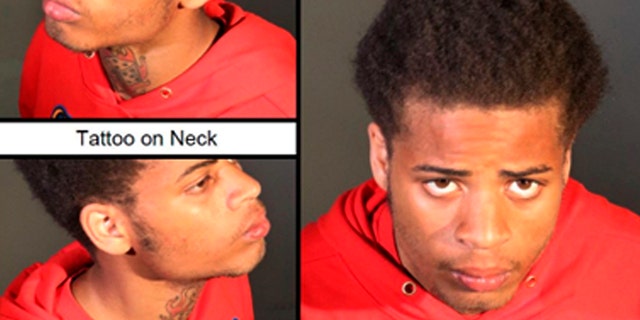 The person suspected of stealing Lady Gaga’s French bulldogs and shooting her dog walker last year has been recaptured after being accidentally released from prison nearly five months ago pending trial.

Authorities announced that James Howard Jackson, 19, was arrested Wednesday after he was released from a Los Angeles County jail “for a clerical error” where he was being held on suspicion of stealing the puppies.

Jackson was one of five people arrested in connection with a February 24, 2021 attack in which Ryan Fischer, Lady Gaga’s dog walker, suffered a gunshot wound.

According to prosecutors, Jackson and two other men believed to be gang members were patrolling the streets looking for expensive dogs to steal when they found Fisher and the three French Bulldogs named Asia, Koji and Gustav.

James Howard Jackson was recaptured after being accidentally released from prison, where he was being held for stealing Lady Gaga’s dogs and shooting her dog walker, authorities said Wednesday, Aug. 3, 2022.
(US Marshals Service via TBEN, File)

Jackson and the others allegedly followed Fischer along Sunset Boulevard before coming into contact with him and shooting him in the chest. According to the police, the attackers also stole the dogs.

The attack was captured by the doorbell camera of a nearby house. Fischer can be heard yelling, “Oh, my God! I’ve been shot!” and “Help me!” and “I’m bleeding from my chest!”

Fischer survived the attack, but lost part of a lung. He is now home and recovering.

Two other people were arrested in connection with the theft, including a woman who returned the dogs.

Two days after the robbery, a woman claimed she found the dogs tied to a post and asked for Lady Gaga’s $500,000 reward offer.

Lady Gaga was seen leaving her apartment with her dog Koji on May 12, 2015 in New York City.
(MPI67/Bauer-Griffin/GC images)

The woman was charged with receiving stolen goods, authorities said.

The father of one of the men who allegedly committed the crime was also arrested for helping the man avoid arrest.

A photo combination of a screenshot from a doorbell camera recording and Ryan Fischer, who was attacked in the footage on February 24, 2021.
(Anonymous via Storyful/@saintrocque/Instagram)

The Los Angeles County Sheriff’s Department announced in April that they were looking for Jackson after a clerical error caused him to be accidentally released from prison.

“The investigation continues and the LASD Major Crimes Bureau is actively working to remand Mr Jackson into custody,” a statement released in April said.

Jackson had already been charged with the assault and pleaded not guilty to attempted murder, conspiracy to commit a robbery and assault with a semi-automatic firearm.

Another suspect, Jaylin Keyshawn White, 20, has been sentenced to four years in prison.

Brie Stimson of TBEN News and The The Bharat Express News contributed to this report.