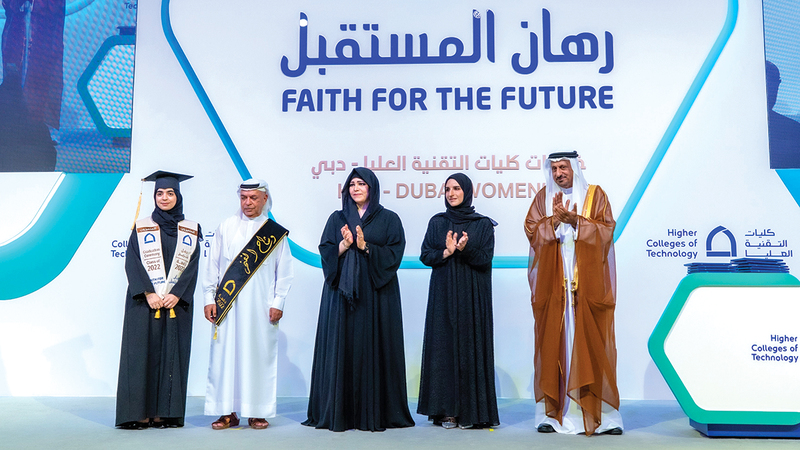 Her Highness Sheikha Latifa bint Mohammed bin Rashid Al Maktoum, Chairwoman of the Dubai Culture and Arts Authority “Dubai Culture” and member of the Dubai Council, attended the graduation ceremony of the Higher Colleges of Technology in Dubai graduates of the “Future Bet” batch. Of the 3,344 female graduates, during a ceremony held on this occasion at the headquarters of the Colleges of Technology in Dubai.

Her Highness Sheikha Latifa bint Mohammed bin Rashid Al Maktoum congratulated the graduates for their success and scientific excellence at the level of the various scientific disciplines they joined, through which they will work to contribute to national development, expressing her appreciation for what women in the UAE have achieved. A high position, which would not have been achieved without the support of the wise leadership in various fields.

Her Highness indicated that the celebration is a celebration of the Emirati girls who have achieved a lot and proved their worth in various fields, and at the local, regional and all global levels, thanks to the thought of a leadership that believed in them and opened for them all the doors of science and work. development and decision-making, stressing that with science, knowledge, will and determination, our country achieves its visions and ambitions. The graduation ceremony was attended by the Director General of the Culture and Arts Authority in Dubai, member of the Board of Trustees of the Higher Colleges of Technology, Hala Badri, the Executive Director of Dubai Colleges, Dr. Kazem Ayoub, and a number of officials, members of the faculty and administrative staff, and parents of the graduates.

Hala Badri pointed out that the “higher technology” was able to prove its distinction and presence in the educational arena, adding that Emirati women have achieved many achievements in various sectors, and were at the confidence of the wise leadership that enabled them and prepared for them all the capabilities and conditions that allowed them to excel and express their capabilities in Take responsibility on the side of the man.

The Bharat Express News - December 2, 2022 0
Passengers ride in the car of a drunk e-reporting driver, who later reports a fake hijacking after a crash