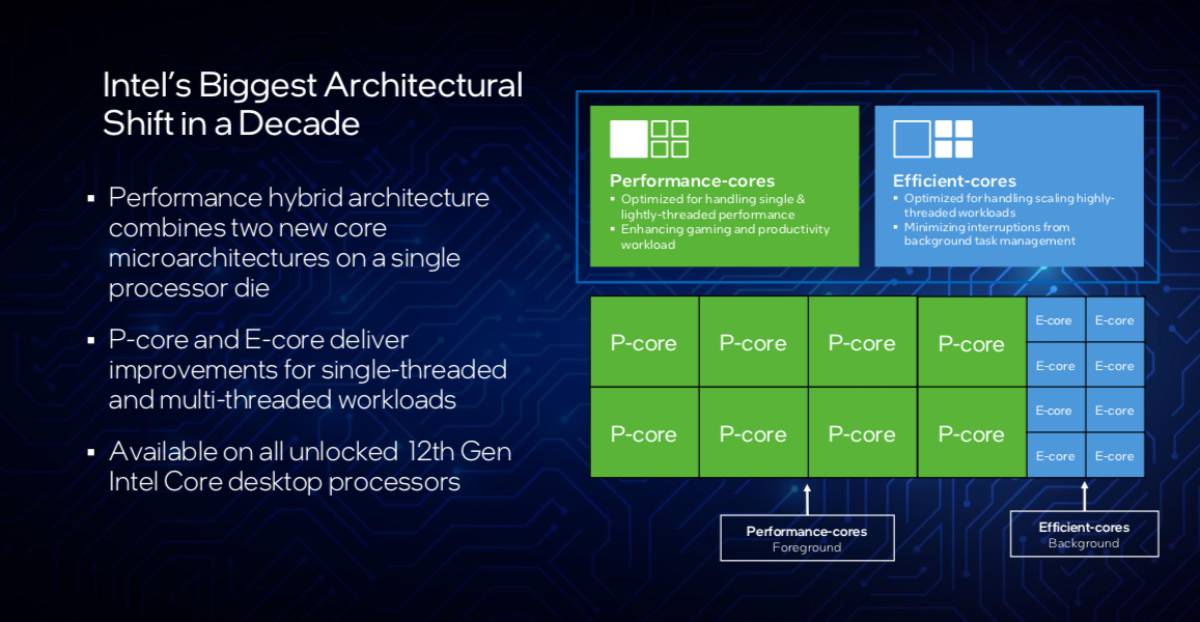 The 12th Generation Intel ‘Alder Lake’ Core i9, Core i7, and Core i5 processors for gaming, workstations and hobbyist desktops have been released, after months of teasers and architectural disclosures. Six new models have been released, all unlocked and overclockable. These new processors are the first of the ‘Alder Lake’ family and for the first time introduce a mix of heterogeneous performance and efficiency cores in consumer X86 PCs. It also marks the advent of DDR5 RAM and the PCIe 5.0 interconnect standard. Intel has yet to announce the availability of 12th generation processors for other segments such as laptops, but the company has said other desktop processor models will follow in early 2022.

The new 12th generation “Alder Lake” processors will have a mix of two different core types, which Intel calls the “performance hybrid architecture”. It works in much the same way that ARM-based smartphone processors have been developed for several years now. This unique architecture will serve all categories of Intel’s mainstream processors, with different mixes of core types. All base 12th generation processors will be manufactured under the newly renamed “Intel 7” 10m process.

Prices in the US range from $ 589 (around Rs. 43,380 before tax) for the high-end Core i9-12900K to $ 264 (around Rs. 19,445 before tax) for the Core i5-12600KF. Models without graphics capabilities are priced slightly less than their counterparts with integrated GPUs. These are prices per 1000 units and may not reflect retail prices. Intel has said it expects robust retail availability despite the global semiconductor shortage, and several PC OEMs are also on board to ship pre-built desktops. Official prices in India are yet to be confirmed, but some priceless retail ads appeared online as early as last week.

The new “Golden Cove” Performance (P) cores succeed the “Willow Cove” cores in the current “Tiger Lake” architecture, while the “Gracemont” Efficiency (E) core architecture can be considered a descendant of the old line of Intel Atom processors. . Intel’s first hybrid processor, named “Lakefield,” launched in 2020 but has been seen in very few actual shipping devices. The 12th generation Core i9 desktop processors announced so far have 16 cores (8P + 8 E), while the Core i7 models have 12 cores (8P + 4 E) and the Core i5 models have 10 cores ( 6 P + 4 E).

While P cores are intended to handle high impact lightly threaded workloads, background tasks and more multithreaded tasks can be delegated to E cores. Additionally, P cores continue to benefit from Hyper -Threading, allowing two threads to run simultaneously, but not E cores, so 12e Gen Core processors will have a non-linear number of cores / threads. To balance workloads and ensure that the optimal tasks are assigned to each type of core, Intel has developed a new dynamic scheduler that it calls Thread Director. This requires Windows 11, and Intel says performance won’t be as optimized on Windows 10 or other operating systems. Thread Director will prioritize the P cores first, then the E cores, and it is only when these are full that the threads will be assigned to the Hyper-Threading capacity of the P cores.

Each P-core has its own L2 cache, while clusters of four E-cores share their L2 caches. These feed a common L3 cache, enabling fast data transfers and low latency in the optimal workloads for each type of core. Processors without the -F suffix will also have an integrated Intel UHD 770 graphics card, based on the Xe LP architecture.

The new Z690 platform controller was introduced, and 12e Gen Core desktop processors use a new, larger LGA1700 socket. Platform-level features for this generation include the first use of DDR5 RAM, with official support for up to 128 GB (dual channel) at 4800 MT / s with XMP 3.0 profiles. DDR4-3200 RAM is also supported and motherboard manufacturers will decide which standard to use on each model. Alder Lake processors support up to 16 PCIe 5.0 lanes, doubling the bandwidth of PCIe 4.0. New CPU and RAM overclocking controls have also been introduced.

The Core i9-1200K is described as “the best gaming processor in the world” and Intel claims it offers significant gains in gaming as well as content creation workloads over the octa-core Core i9-11900K . It can operate up to 5.2 GHz. The two different types of cores operate at different base and turbo speeds: 2.4-3.9 GHz for E cores and 3.2-5.1 GHz for P cores. Base and peak power ratings are respectively 125 W and 241 W.

Intel claims 19% generation-to-generation performance improvements for P cores. The Core i9-12900K is said to offer 50% better multithreaded performance than the Core i9-11900K with a slightly lower peak power consumption of 241W compared to at 250 W. At nominal TDP of 125 W, performance is up to 30% better, while the same level of performance can be achieved within a power limit of 65 W. When you play and stream simultaneously, Intel claims up to 84% higher frame rates. When exporting videos edited while processing RAW images, this figure is 47%. Even performing these tasks sequentially rather than simultaneously would be faster.

The rest of the lineup includes the Core i9-12900KF with nearly identical specs; as well as the Core i7-12700K, Core i7-12700KF, Core i5-12600K and Core i5-12600KF. The -F suffix indicates a lack of on-board graphics capability, while the -K suffix indicates that these are all unlocked and overclockable models. Low-end versions of these processors are expected to launch in the first quarter of next year, potentially as early as CES 2022.