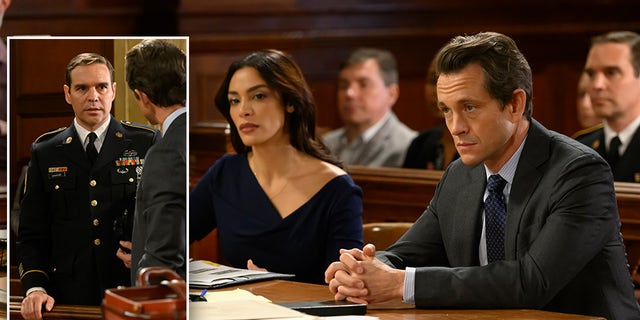 “Law & Order” fans are trained to follow directions, and they discovered a glaring flaw on a character’s military uniform on Thursday’s episode of the popular crime show.

Social media users noticed that the uniform was inconsistent with the storyline, as his character was supposed to be a sergeant major.

“How do you get a guy in an army uniform showing he’s a sergeant first class and making him say he’s a sergeant major,” one user tweeted. “Really? Do you want me to ignore that?”

Fans of “Law and Order” blew up the show because of the misrepresentation of a member of the military service.
(Getty Images)

One Twitter fan wrote: “I just retired after 28 years of service. I served in Iraq at the exact time as the characters at Camp Victory. It was a disgrace when the Petty Officer with Sergeant First Class stripes introduced himself as Sergeant Major. The right rank. If you pay a military expert, fire them.”

Another devoted follower wrote, “Uhhh they messed up the Sargent Major, his stripes were no good…do better.”

“Love these shows, but you guys need to do a better job portraying members of the military,” another Twitter user commented.

“The last episode of Law & Order had a ‘sergeant major’ wearing the rank of sergeant first class. It completely ruins the whole episode and makes it really unbelievable.”

However, some fans were unbothered by the uniform and praised the program on Twitter: “Excellent relevant heartbreaking delivery, exuded empathy and understanding.”

Christopher Meloni and Mariska Hargitay have been collaborating on ‘Law and Order’ for decades.
(Will Hart/NBC)

Dick Wolf created the “Law & Order” franchise in 1990, which has since spawned several spin-offs and over 1,000 episodes of television.

“While Dick Wolf also brags about how the show is written in shades of gray or how both sides of an issue are shown, there’s one side it’s always on and that’s the police,” Oliver said.