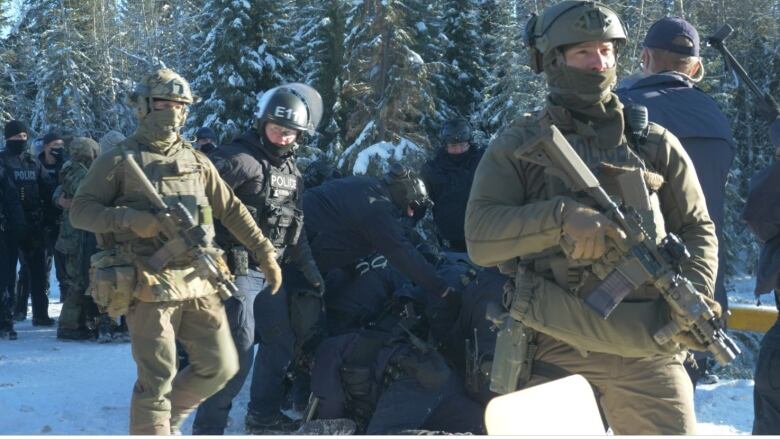 Police called a prominent Haudenosaunee leader of the Homecoming movement “violent”, according to court records of a recent RCMP operation to clear barricades from a road in northern British Columbia.

Skyler Williams was one of 30 people arrested in two days last week along the Morice River Forest Service Road, which runs from Houston, British Columbia, about 1,000 kilometers north of Vancouver.

It was the third police operation in as many years against barricades to stop construction of the Coastal GasLink (CGL) pipeline, which would bring natural gas to a $ 40 billion export terminal on the coast.

ALSO READ  As of Monday, US rules on international travel change | Radio-Canada News

According to the report an affidavit filed by the RCMP with the BC court.

It is not known which police force reported it, when and why.

“The only days that any violence has happened are people with guns on their hips and badges on their chests,” he told TBEN News in a telephone interview.

“And it’s not us who are violent, it has never been that we are violent in any way. It’s not me.”

Williams has, over the years, faced several non-violent charges for land disputes involving residents of his Six Nations Haudenosaunee community claiming land. He pleaded guilty to a non-violent charge in 2008.

He also currently faces non-violent charges including mischief and violation of an Ontario Provincial Police (OPP) injunction for his involvement in a successful battle to close a housing development in Caledonia, Ont. .

WATCH | Images of the RCMP raid:

Video footage provided to media on Tuesday by filmmaker Michael Toledano shows tactical RCMP officers breaking through a door to arrest pipeline opponents Toledano and another reporter in Wet’suwet’en territory last week. Toledano was working on a documentary commissioned by TBEN’s The Passionate Eye at the time of his arrest. 6:40

Williams said the red flag on his name was not only fake, but was life threatening.

“It increases the risk for us. Every time we are stopped you don’t know what the interaction with the police will be like,” he said.

“This is typical of what is happening to indigenous resistance in this country.”

The RCMP did not respond to a request for comment.

Williams, spokesperson for the Land Back movement 1492, traveled to Wet’suwet’en territory to support the hereditary chiefs’ long-standing opposition to the CGL along with a handful of other Haudenesaunee from the Six Nations, near Hamilton, and Akwesasne, which sits in Canada-US border about 120 kilometers west of Montreal.

Police departments across the country feed these databases.

The affidavits also indicated that some of those arrested, although they did not have a criminal record, returned with access to the database for interactions with police in other parts of the country.

All had their names on PRIME and CPIC. It was not always clear from the affidavits which databases produced some of these results.

This raises “all kinds of questions about surveillance and data sharing and how these surveillance practices lead to the criminalization of land defenders,” said Jeffrey Monaghan, assistant professor at the Institute of Criminology and Justice. from Carleton University, who has co-authored a book on Police and Indigenous Movements.

CGL has the support of 20 elected First Nations band councils along the project route. The Wet’suwet’en First Nation issued a statement condemning the barricades.

Hereditary chiefs claim authority over 22,000 square kilometers of the nation’s traditional territory, an area recognized as unceded by the Supreme Court of Canada in a 1997 ruling.